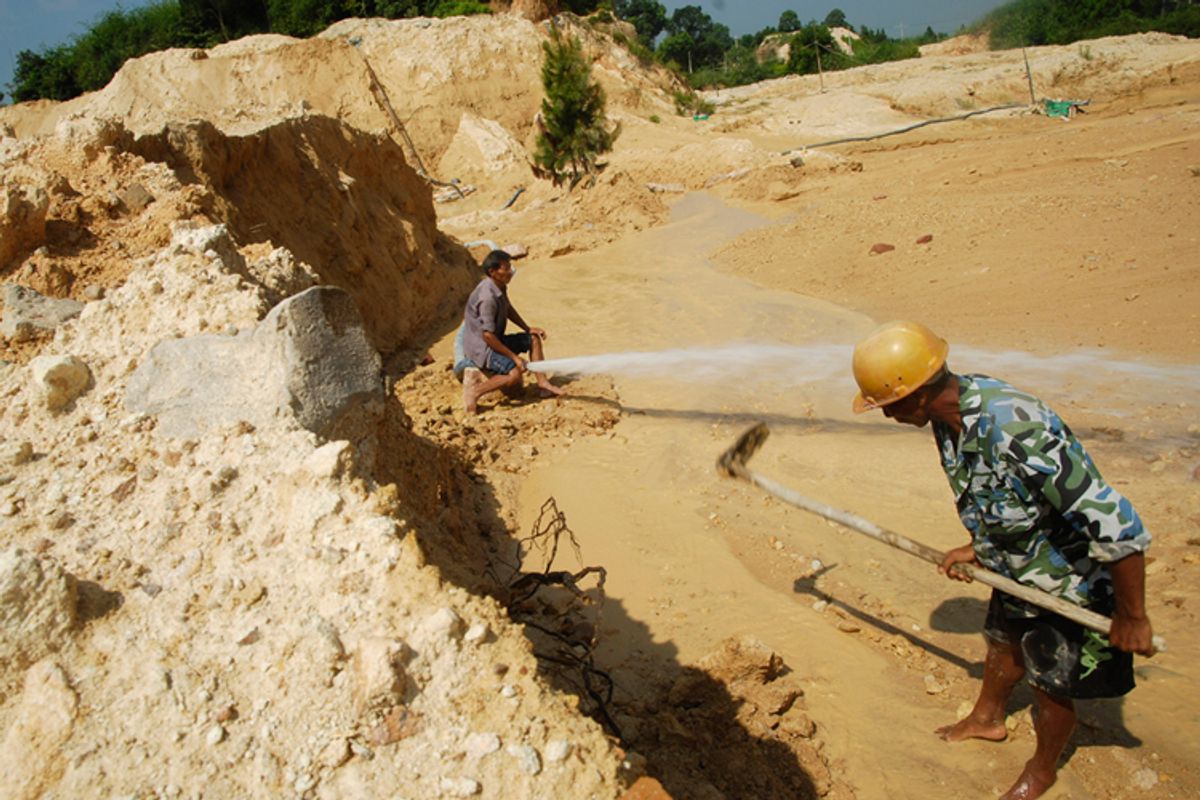 Chinese laborers at a rare earth mine in Jiangxi province on August 6, 2010.
--

If a conservative is a liberal who just got mugged, then an advocate of government intervention in the economy is nothing more than a free market believer who just realized that China dominates an industry with major implications for national defense and renewable energy technology.

That's the primary conclusion to be gleaned from a review of three recent studies of Chinese dominance of rare earth element mining and processing, "Rare Earth Elements: The Global Supply Chain," a report published by the Congressional Research Service in July, the Government Accountability Office's "Rare Earth Materials in the Defense Supply Chain," published in April, and China's Rare Earth Elements Industry: What Can the West Learn?" published by the Institute for the Analysis of Global Security in March.

The last report, written by Cindy Hurst, an analyst for the U.S. Army's Foreign Military Studies Office in Fort Leavenworth, KS., is the most interesting and detailed. But all three studies underline the same message. Rare earth elements are critical to advanced military technologies, computer and cellphone hardware, hybrid car batteries and wind turbine magnets. In other words, if you were going to target an industry crucial to dominating key technologies of the 21st century, rare earth element processing would be near the top of the list.

The U.S. used to be self-sufficient in both the supply and processing of rare earth elements. But today, China is far and way the dominant player at all stages of the supply chain -- and the United States has zero capability for processing the most important minerals. The difference between the two countries? China realized the strategic importance of rare earth elements very early on and directed significant state resources to their development. But when Chinese overproduction crashed world prices in the 1980s and 1990s, American companies abandoned the industry. Now the best guess is that it would require ten to fifteen years for the U.S. to reestablish the domestic infrastructure for processing rare earth element ores into usable materials.

Since global consumption of rare earth elements is growing much faster than production, that means a big squeeze in rare earth element prices could be coming in the next decade. Naturally, those nations with access to the raw material and processing infrastructure will be much better positioned than those without. And a lot can happen in just ten years. For example, Cindy Hurst notes that between now and 2020, China plans to expand domestic wind power electriity productiont from from 12 gigawatts (GW) of wind energy in 2009 to 100 GW in 2020. Wind turbines require neodymium magnets. Chinese control of the resource neatly fits into Chinese goals for ramping up its own renewable energy usage, not to mention dominating the global industry for wind turbine manufacturing.

The U.S. defense establishment tends to understand that sometimes long-term strategic considerations aren't best left to the free market. Since rare earth elements are critical to "jet fighter engines, missile guidance systems, antimissile defense, and space-based satellites and communication systems," as noted in the Congressional Research Service report, the U.S. military has become quite vocal about its concerns -- and Congress is listening. There are pending legislative proposals in both the House and Senate aimed at restarting an American rare earths industry.

We'll see how far that gets. I'm guessing that it will be a tough chore catching up with China, no matter how much industrial policy religion the U.S. government suddenly gets. Whatever kind of government support Congress authorizes for rare earth element development in the U.S. is likely to be dwarfed by ongoing Chinese investment, if the relative expenditures on renewable energy in the two nations are any guide.

One thing that I did not realize until reading the Hurst report was that the controversial, and ultimately unsuccessful attempt by the state-owned Chinese oil company to buy Unocal back in 2005 may have largely been a rare earth element play. There is one currently operating rare earth mine in the United States, California's Mountain Pass mine, owned by Molycorp.

In 1978, Unocal purchased Molycorp. In 1982, Mountain Pass Mine began processing samarium oxide and in 1989, it began processing neodymium oxide, both critical components of two types of permanent magnets. In 2005, China National Offshore Oil Corporation (CNOOC) submitted an $18.5 billion cash bid for Unocal, outbidding Chevron by half a billion dollars. CNOOC's bid raised a great deal of concern for U.S. energy security. While there was a media frenzy over these concerns, one issue received little attention -- repercussions of China gaining control over Molycorp through CNOOCs purchase of Unocal. If the deal were to have gone through, China would have gained control over Mountain Pass and therefore the country would have had a complete monopoly over all the current major rare earth element resources in the world.

In retrospect maybe it was a smart decision to block the Chinese purchase of Unocal, though I suspect that most of the politicians who were grandstanding the loudest about the dangers of letting China gobble up a U.S. oil company didn't have a clue as to the rare earth angle, and would likely have dismissed renewable energy technologies as hippie self-indulgence. But the bottom line is that China has its eye on the prize, while the U.S. continues to flail.