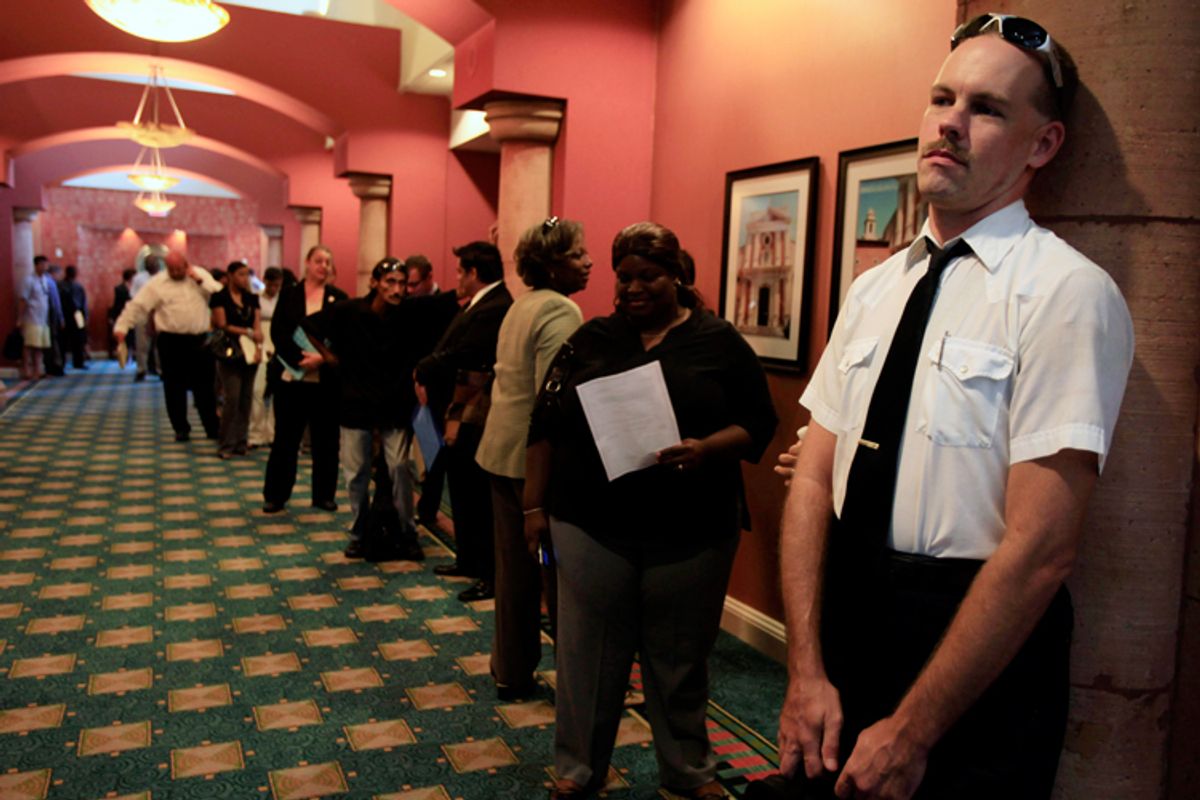 An Op-Ed piece in the Wall Street Journal kicks off the week by arguing that the extension of unemployment benefits has raised the unemployment rate almost 3 percentage points higher than it would have been if the government had just said "tough luck" to out-of-work Americans. This, in itself, is not surprising, just standard boilerplate right-wing anti-welfare-state ideology.

But should we take it more seriously because the person making the argument is Harvard economist Robert Barro, long considered on the short list for the Nobel Prize? Barro, according to an admiring profile in Finance & Development, an International Monetary Fund publication, is the author of six of "the 146 most influential articles in economics since 1970." His work resonates at the core of Chicago school theory, "part of the body of work [in the 1970s] that turned the tide of academic opinion in favor of a more modest role for government."

He's a big deal, and you can be sure that his WSJ broadside will be praised and attacked far and wide in the next 24-36 hours. It's the kind of argument tailor-made for Republican talking points. If only Obama's economic advisors had told him not to keep extending unemployment benefits, the unemployment rate would be 6.8 percent instead of 9.5 percent! That disparity, as Barro notes, could mean the difference between Democrats' maintaining, or losing, control of Congress this November.

Business Insider's Joe Wiesenthal was the first out of the gate this morning to marvel at Barro's audacity. As Wiesenthal observes, Barro's only argument is that during the 1982 recession, the proportion of unemployed Americans who fall into the category "long-term unemployed" peaked at 24.5 percent. During the current cycle, the share of long-term unemployed peaked in June 2010 at an appalling, and unprecedented, 46.2 percent. Barro, to borrow his own word, "assumes" that the difference between now and then is that Congress keeps extending unemployment benefits, thus providing an incentive to unemployed workers not to look for work. If Congress had held pat, Barro argues, long-term unemployment would again have peaked at 24.5 percent, and then started to fall.

This is a remarkable assumption. The primary factor behind the 1982 recession was Federal Reserve Chairman Paul Volcker's decision to raise interest rates enormously high, as part of his war against inflation. In other words, it was a completely different animal compared to the current downturn, which was precipitated by a financial crisis and a housing bust greater than anything the United States has experienced since the 1930s. A crisis that is still ongoing.

Barro has previously argued that the Obama administration was wrong to attempt to stimulate the economy. In his WSJ Op-Ed, he links that critique to his unemployment thesis and suggests that House Minority Leader John Boehner was correct to call for the replacement of Obama's economic team.

Some progressives would no doubt agree. But if Barro had his way, Obama's economic advisors would have been Chicago schoolers who responded to the worst economic crisis in 80 years by doing nothing. (Except, possibly, lowering taxes even further.) He seems to think that this would have improved Obama's political standing with the electorate.

How Barro can possibly imagine this to be true gives us a pretty good glimpse at the utter disconnect between conservative economists and the real world. The consensus of private forecasters is that the Obama stimulus raised GDP significantly and kept unemployment from rising as high as it might otherwise have. No stimulus, plus no extensions of unemployment benefits, would have equaled a deeper recession, with more people out of work, even more homes going into foreclosure, and a general increase in human misery all around.

Obama would have been flayed alive if he had pursued such an agenda. Barro's chutzpah is astonishing. Standing in the middle of the wreckage caused by a financial disaster that his own school of economic thought considered impossible, his only advice is to do nothing. It would seem completely nutty, if not for the fact that such views represent the platform of the political party seeking to regain power in just a few months.

Economics How The World Works Unemployment