The Dora the Explorer cocktail

Made from things you probably bought for your kid, this is the new mother's little helper 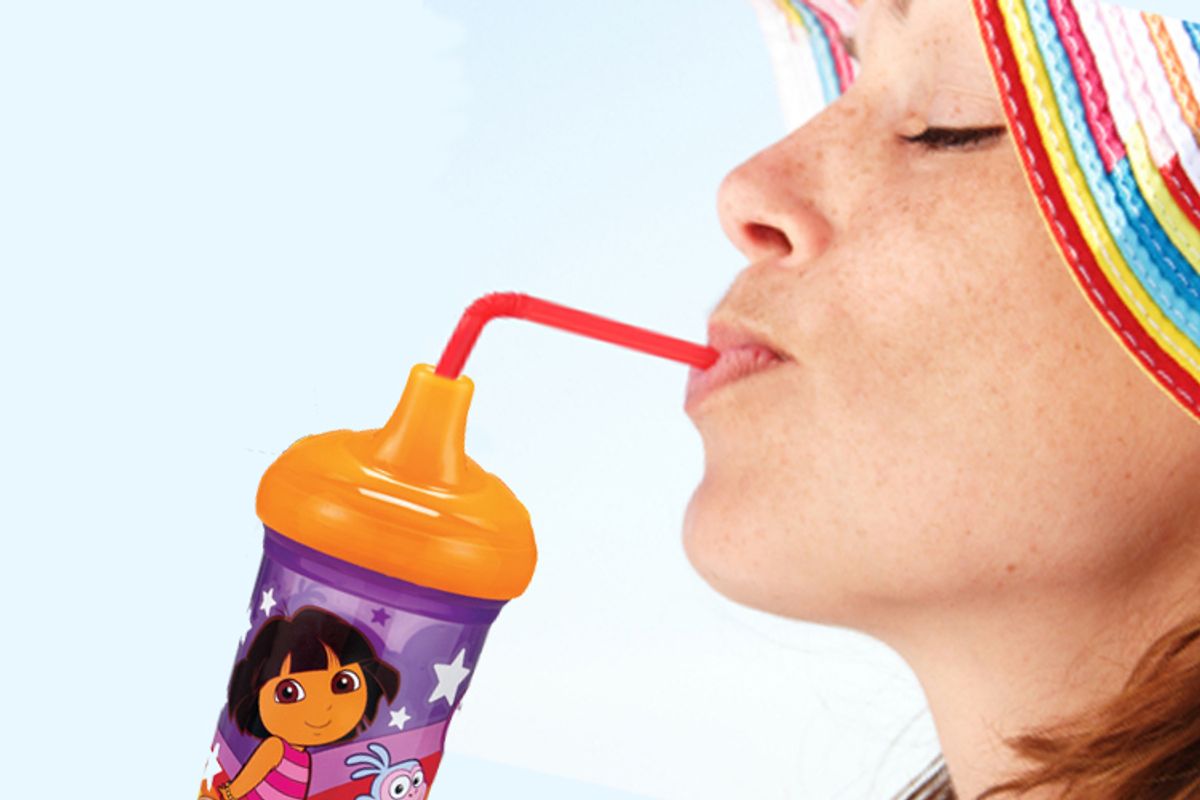 Late at night, collapsed into bed, my husband and I lay quietly. We are exhausted, unable to have adult conversation. I startle when I hear him quietly and without warning ask, "In the episode 'A Letter for Swiper' what happens to the Special Delivery Bird?"

Without hesitation, I yell, "Her glasses break; HER GLASSES BREAK!!"

We laugh wickedly for half an hour trying to one-up each other with Dora the Explorer trivia. I'd like to tell you it gets kinky, but alas ... I cannot. This is strictly a pissing contest. We are sincerely trying to determine who knows the most about our son's favorite cartoon character.

It isn't as if we don't know how far we've fallen. We used to have arguments over the existence of God, women's agency in Dickens' novels, the healthcare crisis. We are today reduced to debating at length the route Dora takes to Abuela's house. On the bright side, we're learning a lot of Spanish.

I came to my Dora fandom five months ago. My son, who was 6 months at the time, was throwing a classic YouTube baby meltdown and I was at the end of my rope. I put him in his baby swing, turned on the television, and tuned into Nickelodeon. He stopped crying. He giggled. I looked at him and then back toward the screen and I was introduced to Dora Marquez and her sidekick, Boots the Monkey. My baby looked up at me with a grin, the likes of which I had never seen before. He does this often when he watches Dora. He looks at me as if to say, "Mom! Did you see that? Hilarious!!" Each episode follows Dora and Boots as they embark on an adventure to find something, learn something, or help someone. Motherhood has been made easier by Dora.

Now, I'm thankful for the existence of Dora. But I'm also an adult and I want to cover my ears when I hear the Dora theme song for the third time in an hour. She invades my head while I drive, while I eat, and while I work. My dreams take place in Dora's fantasy land where I have a monkey for a sidekick and I'm great at solving problems and I never hold a grudge. My mind turns to mush as I waste one more 22-minute time block finding out whether Dora will choose the right boat to take across the noisy river. Mama needs a drink.

Derived from ingredients I had in my refrigerator, Deliete de Dora is a fruity summer cocktail that will quell the heat and heighten your senses. I will find out later tonight if it spices up Dora trivia. (For this recipe I used a small stemless wine glass, which was the perfect size for containing this drink. I also used a single-serve coffee press, although a cocktail shaker would probably work as well.)

If you have kiddos, simply eliminate the rum and give them their own fruit cocktail to enjoy. While they watch Dora. Again. Ay dios mio.