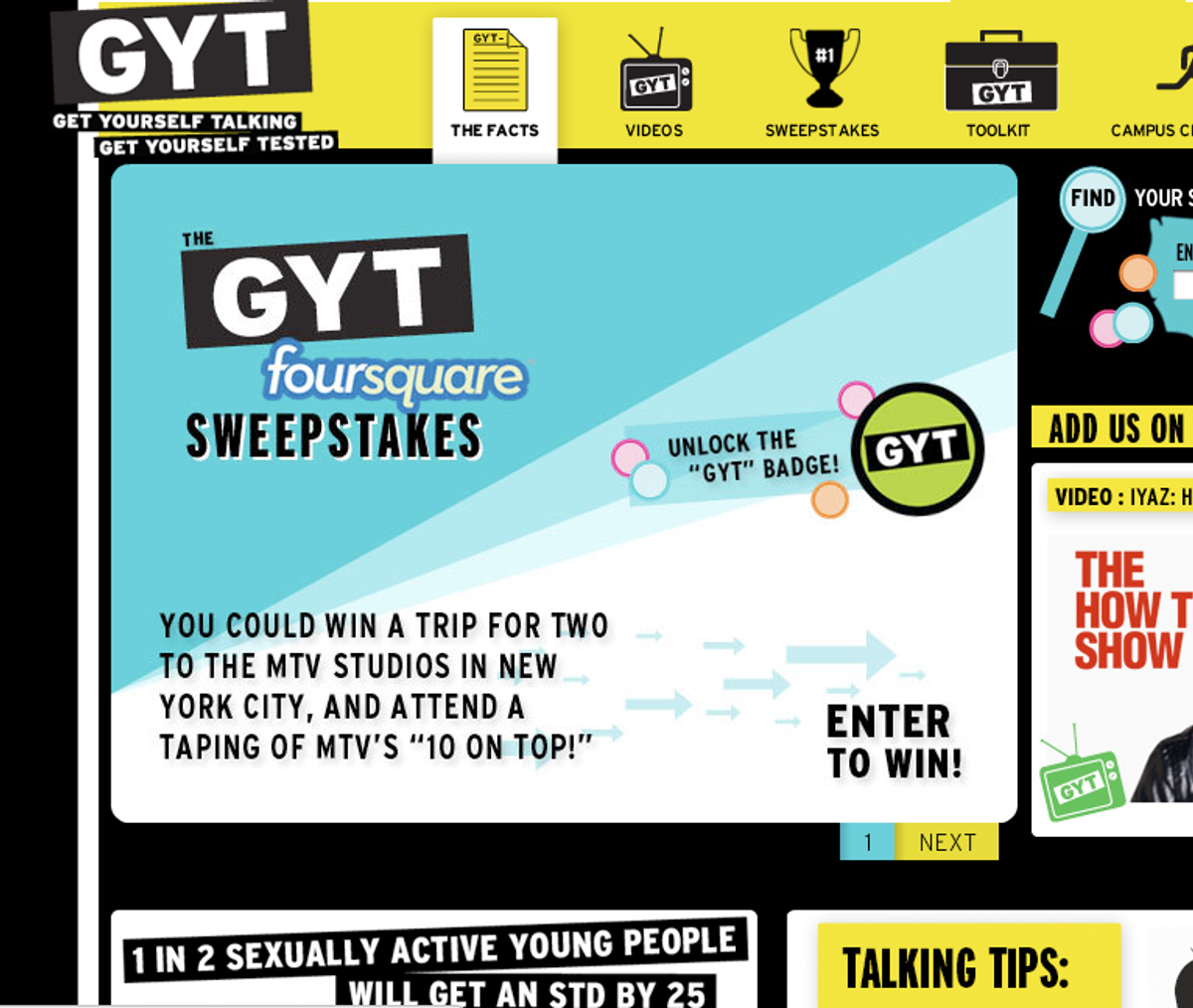 Foursquare lets you check in at the grocery store, the coffee shop, the local dive bar -- why not the local STD-testing clinic? That is exactly the idea behind the latest installment of MTV's Get Yourself Tested campaign, which encourages youngsters to get tested and, while they're at it, check in on foursquare to tell the whole world all about it. Their reward: A "GYT" badge.

I will admit that I don't really get foursquare, aside from it being a great way to stalk people. Also: I am no longer a teenager and, tragedy of tragedies, am too old to audition for "The Real World." So, it's safe to say I am not part of the campaign's target demographic. That said, I still vividly remember being a teenager, and specifically being a teenager going to the local clinic for STD testing, and the prospect of announcing it to the entire world would have sent me running for the hills.

But the push to speak out and remove the stigma around STD testing has always been a crucial part of awareness-raising campaigns -- and that challenge sure remains. Case in point: Planned Parenthood has made more than one list of the top mayorships you don't want on foursquare. Also topping these lists? Pawn shops, massage parlors, methadone clinics, rehab and jail. That's right, according to the Internet, routinely visiting a reproductive health clinic is comparable to being a regular at the local jail.

The campaign also gives teens a testing incentive that isn't health related: "Anyone who unlocks the badge is automatically entered into the GYT foursquare sweepstakes where they could win a roundtrip excursion for two to New York City with airfare, accommodations and backstage passes to MTV's '10 on Top,' a weekly countdown of the hottest pop culture power players," according to a press release. This is smart not only because it adds motivation but also because it provides a safe excuse for testing. It's much easier to explain a clinic visit as an attempt to win a silly contest than it is to tell your parents that you're having sex or to reveal to your friends that you've got a weird itch down there.

If this social networking approach works, just try to imagine what the next generation of awareness-raising campaigns will look like. I'm talking STD-testing status updates on Facebook and Tweetups at the local clinic. Maybe one day, the Planned Parenthood mayorship and the STD Testing badge will be highly coveted prizes -- but even if they merely rise above the ranks of rehab and jail, that will be worthy progress.