We came so close to never meeting Sarah Palin

Two years ago this week, a 72-year-old man's arbitrary impulses made Sarah Palin a star 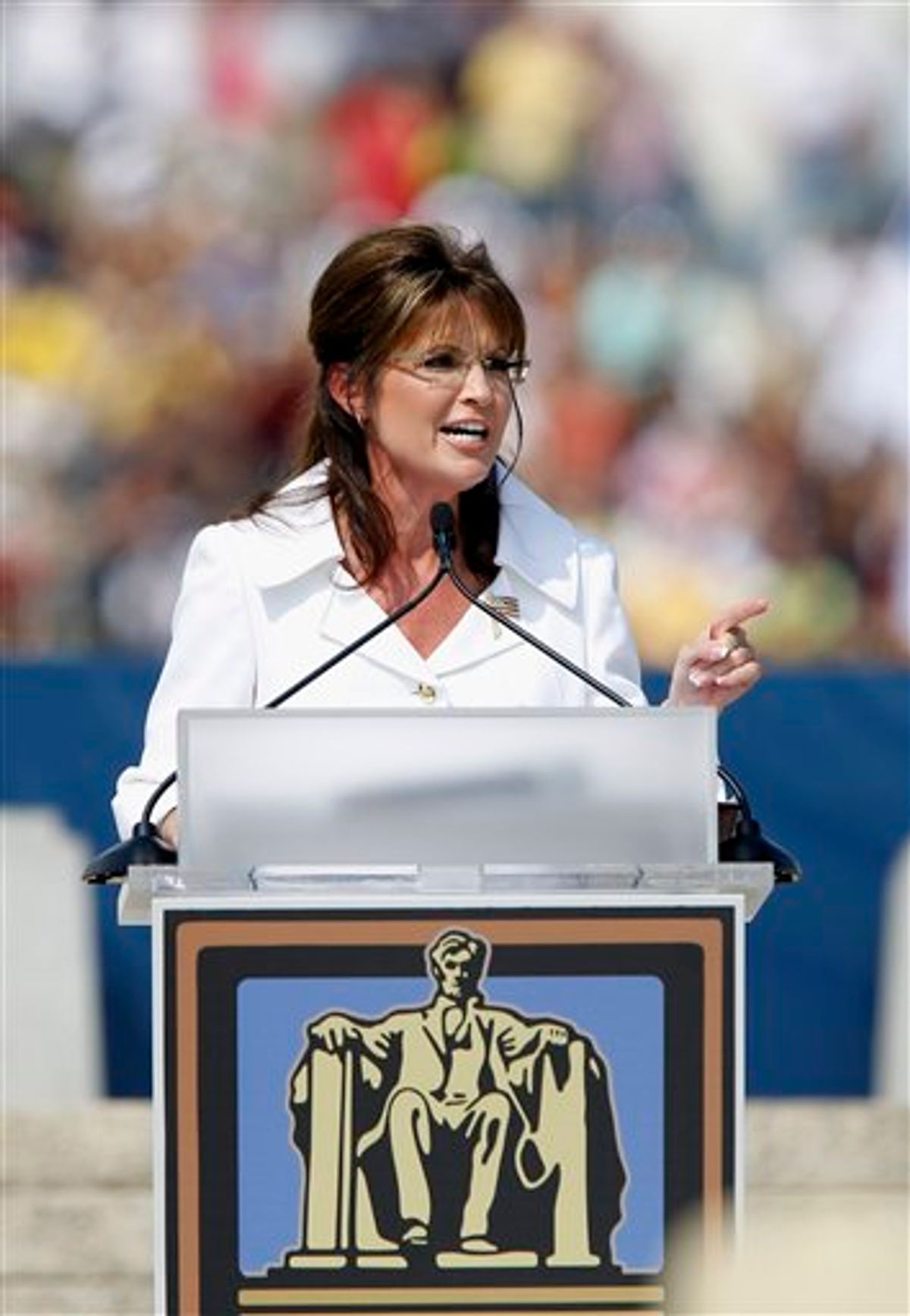 Two years ago this week, John McCain woke up in a particular mood and changed American politics and culture. You remember how it happened: As Barack Obama prepared to deliver his acceptance speech at Denver's Mile High Stadium On Aug. 28, 2008, word leaked that McCain, whose own convention would begin a few days later, had finally decided on a running mate. But who?

For once, the press was genuinely stumped. McCain had been unusually successful at shielding his deliberations. The consensus of the political class was that he would tap Tim Pawlenty -- not because Pawlenty was a particularly compelling prospect, but only because the rest of the names supposedly in the mix made little sense. Joe Lieberman was anathema to the base, Tom Ridge was pro-choice, and Mitt Romney was on McCain's enemies list, and so on. No one really made sense, so Pawlenty it was.

Only the next morning, as confusing early news reports that many observers initially disbelieved began to sink in, did it become clear that McCain had tapped the little-known first-term governor of Alaska. And almost immediately, it also became clear just how impetuous his selection of Sarah Palin was -- how little McCain and his team had actually known about the 44-year-old, and how little she knew about the world.

Every four years, when it comes time for a presidential nominee to pick his or her running mate, we are reminded -- over and over -- that the decision is important because the running mate may soon be a heartbeat away from the presidency. And the months leading up to the pick are filled with media commentary about the potential electoral implications of every person thought to be on the running-mate short list.

But Palin's story shows how all of this can miss the mark. She and McCain never came particularly close to winning the White House, and for all of the attention she received, it's doubtful her presence cost (or gained) the GOP ticket a single state in the '08 election. But look at the role she's playing in politics today. The real significance of a running-mate selection, then, is simply that it marks the introduction of a new force into the political/media mix -- a force that could have a major and unanticipated impact on the country's future.

Palin is the most extreme example of this, since she was so thoroughly unknown and because she generated such strong personal reactions from voters. If McCain had opted for Pawlenty instead, Palin's presence in national conversation would probably be limited today to a handful of bloggers trying to draw attention to her -- and being met with a wall of indifference.

But even a well-worn pol can morph into a new force if he or she is chosen as a No. 2. The example of Dick Cheney leaps to mind. Politically, Cheney was an afterthought in the summer of 2000, when he headed up George W. Bush's V.P. search team. After his term as George H.W. Bush's defense secretary ended in 1993, Cheney had set out to run for president in 1996, but his utter lack of charisma yielded poor reviews and he worried about the implications of his daughter's sexuality, which wasn't yet public knowledge. So Cheney took a pass, moved to Texas, and racked up a fortune as Halliburton's CEO. His days as a candidate for office were over -- until Bush put him in charge of the V.P. hunt.

Spying an opportunity to jump back in the game, Cheney recommended himself to Bush. Ultimately, Bush's decision came down to Cheney and one other man: John Danforth, a former Missouri senator and ordained Episcopalian priest whose political moderation was fast becoming archaic within the GOP. At the time, it seemed as if Bush was picking between two boring white guys, and when he chose Cheney, he was saluted by the press for adding "gravitas" to the ticket by choosing a wise, seasoned party elder.

Of course, Cheney proved to be something far different as V.P., amassing and exercising extraordinary influence, especially during Bush's first term. In essence, Cheney seized on the vacuum created by Bush's inexperience and hands-off style. It's pretty much unimaginable that Danforth would have shared Cheney's obsessions with executive power and Middle East militarism, much less the backroom savvy that Cheney demonstrated in pushing his agenda.

Indeed, the most consequential foreign policy and national security voices in the Bush administration  belonged to Cheney loyalists, many of whom owed their slots to him: Donald Rumsfeld, Paul Wolfowitz, Scooter Libby, Doug Feith and John Bolton, to name a few. How different would Bush's brain trust have been with a different vice-president? And how differently might that brain trust have responded to 9/11? It's all the consequence of one midsummer decision by Bush in 2000.

Other recent running-mate picks have proven momentous. Take Michael Dukakis' decision to team up with Lloyd Bentsen in 1988. A conservative Democrat from Texas, Bentsen had briefly -- and disastrously -- sought his party's presidential nod in 1976. But by '88, at the age of 68, his White House ambitions seemed a thing of the past -- and they would have stayed that way had Dukakis instead chosen John Glenn, his other V.P. finalist.

But on the national stage in the fall of '88, Bentsen delivered one of the most memorable lines in American political history, his "you're no Jack Kennedy" rebuke of Dan Quayle. Bentsen's presence did nothing to help Dukakis in November, but he emerged from the race as something of a Democratic folk hero, his stature elevated in the same way Mario Cuomo's had been by his electrifying convention address in 1984. That, in turn, made Bentsen an unlikely White House prospect for 1992 -- especially when every other big name Democrat refused to enter the race, scared off by George H.W. Bush's post-Gulf War popularity. Had Bentsen wanted it, he very likely could have secured the '92 nomination, though he too passed on the chance to run. Still, he wouldn't have even been an afterthought had Dukakis not picked him, of all people, to join the '88 ticket.

To be sure, not every running mate turns into a star or assumes a mighty policy-making perch. Jack Kemp's stint as Bob Dole's No. 2 in 1996, for instance, was utterly unremarkable: Dole plucked him from the political sidelines that August, and Kemp promptly returned to the sidelines when the election ended, his reputation neither enhanced nor ruined. It was as if he'd never run at all.

Still, as Bentsen showed in '88, Kemp could have emerged as a new force in politics. The unparalleled visibility that comes with running on a national ticket gave him the opportunity. He just did nothing with it. Not so with Sarah Palin, though. She's been a phenomenon from the moment she and McCain held their first rally in Dayton two years ago. And she didn't need to run in any primaries to make it to that stage, nor did she need national name recognition or money: All it took was McCain waking up one day in just the right mood. In our quirky system, that can be worth more than a lifetime of work.