Once again, ABC's chief investigative correspondent hypes a scoop that fizzles out 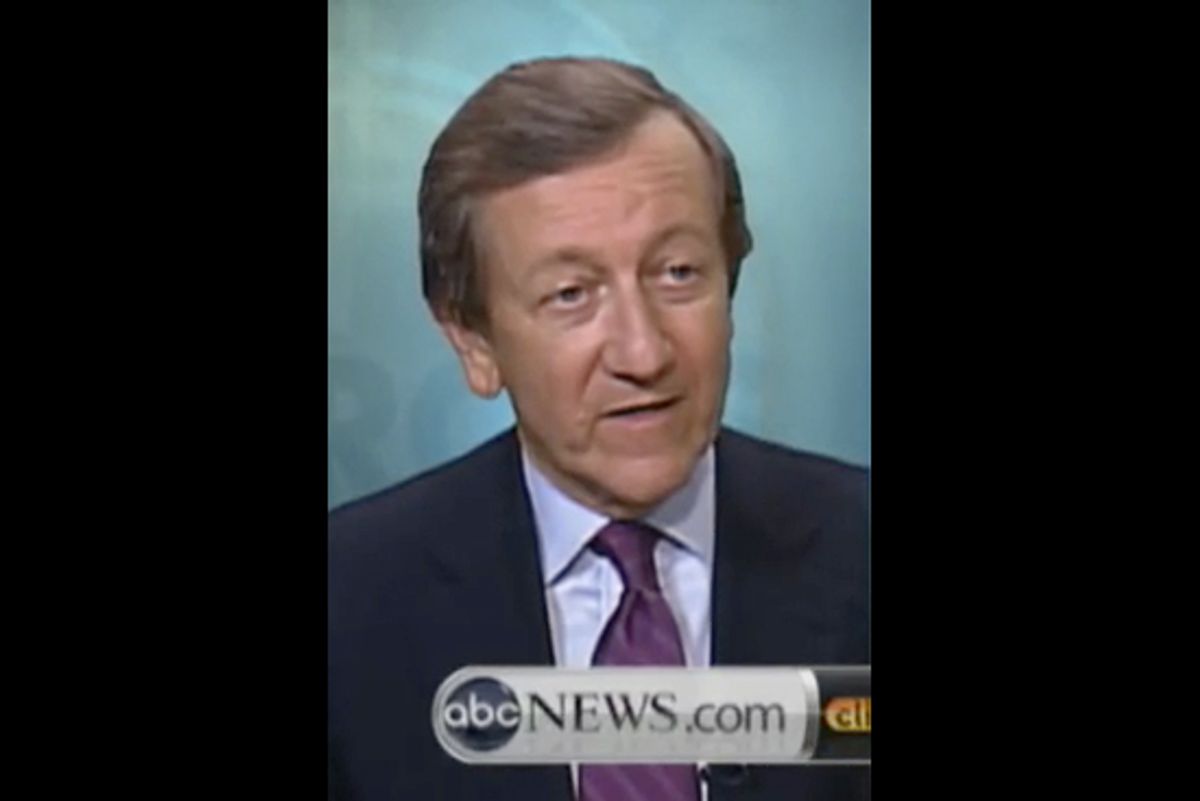 The story from ABC News' investigative unit Monday evening was as startling as it was thinly sourced. Running with a triple byline under the headline "ABC News Exclusive: Two Men on United Flight from Chicago Arrested for 'Preparation of a Terrorist Attack' in Amsterdam," the story began like this:

Two men taken off a Chicago-to-Amsterdam United Airlines flight in the Netherlands have been charged by Dutch police with "preparation of a terrorist attack," U.S. law enforcement officials tell ABC News.

U.S. officials said the two appeared to be travelling with what were termed "mock bombs" in their luggage. "This was almost certainly a dry run, a test," said one senior law enforcement official.

Playing the story as the next big terrorism case, ABC quickly posted mug shots of the two Yemeni-born U.S. residents along with a passenger's cellphone video of them being taken off the plane.

But within 24 hours, the story had fallen apart -- the latest in a string of terrorism exclusives by ABC's Brian Ross that have not held up to scrutiny.

It turns out the incident, involving a pair of Yemeni men, was not "almost certainly a dry run," as ABC reported. Rather, it appears to have been what Pete Williams of NBC termed a "weird set of coincidences." The Wall Street Journal is reporting the men were likely "unsuspecting fliers snared in the high-security net of international air travel." In fact, the two have no apparent connection to each other besides the fact that both missed the same flight and were booked on the same replacement flight to Amsterdam.

Despite the fact that the lead of the original ABC story reported  that the men had been "charged" by Dutch police with "preparation of a terrorist attack," it is now clear that they were merely arrested on suspicion of that charge. In an interview with Salon, Ross acknolwedged that there is a difference, but said that U.S. officials had given ABC incorrect information Monday.

"It may be that an arrest is not considered a charge," he said.

The original erroneous story is still up on ABC's website and has not been edited or corrected.

One of the arrested men, Detroit resident Ahmed Mohamed Nasser al Soofi, was carrying $7,000 in cash and had unusual items in his checked in luggage including a cellphone taped to a Pepto-Bismol bottle.

Citing the FBI, Ross referred to the phone and bottle on the World News broadcast Monday evening as "a kind of mock explosive."

Multiple media outlets including the AP have reported that al Soofi had one knife and one box cutter in his checked luggage -- which is legal. In contrast, ABC reported that there were "a box cutter and three large knives" (emphasis ours). It's not clear at this point which report is accurate.

The story as it was originally reported by ABC fit neatly with the Obama administration's new focus on Yemen as a source of terrorism. It was seized on by many right-wing commentators, with the Heritage Foundation's James Jay Carafano concluding at National Review: "[T]his incident should remind us of three indisputable facts: 1) There are terrorists out there; 2) they are trying to kill us; and 3) if we don’t work proactively to stop them, one day they will succeed again."

Ross defended his reporting in an interview with Salon, saying that law enforcement officials genuinely suspected terrorism on Monday. He noted that the two men had been pulled off the plane and that FBI agents were chasing down leads around the country to find out who they were.

"Sometimes when these things break you sort of have to report what you know, adding the best you can that there may be another explanation," he said. "As long as we're current and accurate, that's the best that you can do."

Ross said that he was careful to preface his report on ABC's World News Monday (watch it below) by saying, "There may be a perfectly innocent explanation for what happened."

However, that same segment with Diane Sawyer included this remarkable exchange (emphasis ours):

BRIAN ROSS: It's not clear why they shipped all these things in the bags. But it has raised serious concerns, especially with the approach of the September 11th anniversary.

DIANE SAWYER: They may have been a kind of advance team coming here to try to...

BRIAN ROSS: That is a concern.

It's worth noting that other outlets were far more cautious than ABC. Soon after ABC ran its exclusive story Monday, the New York Times had a piece that said in the second paragraph, "law enforcement officials cautioned on Monday night that the men had not been charged with any crime and that the episode might be a misunderstanding."

This is hardly the first time that Ross has been out front -- and, in hindsight, wrong -- on terrorism stories.

In 2007, Ross ran a now-notorious exclusive interview with former CIA officer Jon Kiriakou about, among other things, the efficacy of waterboarding. That story, hyped uncritically by ABC, was picked up in other media and informed the public debate about waterboarding for years -- until, of course, it turned out to be bogus.

In November, Ross reported that the Fort Hood shooter, Maj. Nidal Malik Hasan, had attempted to make contact with "people" associated with al-Qaida. That turned out not to be true.

In December, he reported that a released Guantánamo detainee was a mastermind of the attempted Christmas Day bombing. As it turned out, the detainee in question had actually been in the hands of Saudi authorities for months and had no role in the plot. That didn't stop myriad media outlets from picking up the inaccurate story.