The truths about Iraq that Obama couldn't utter

As troops withdraw from Iraq, the president gave a dutiful speech. But there was so much he could not say 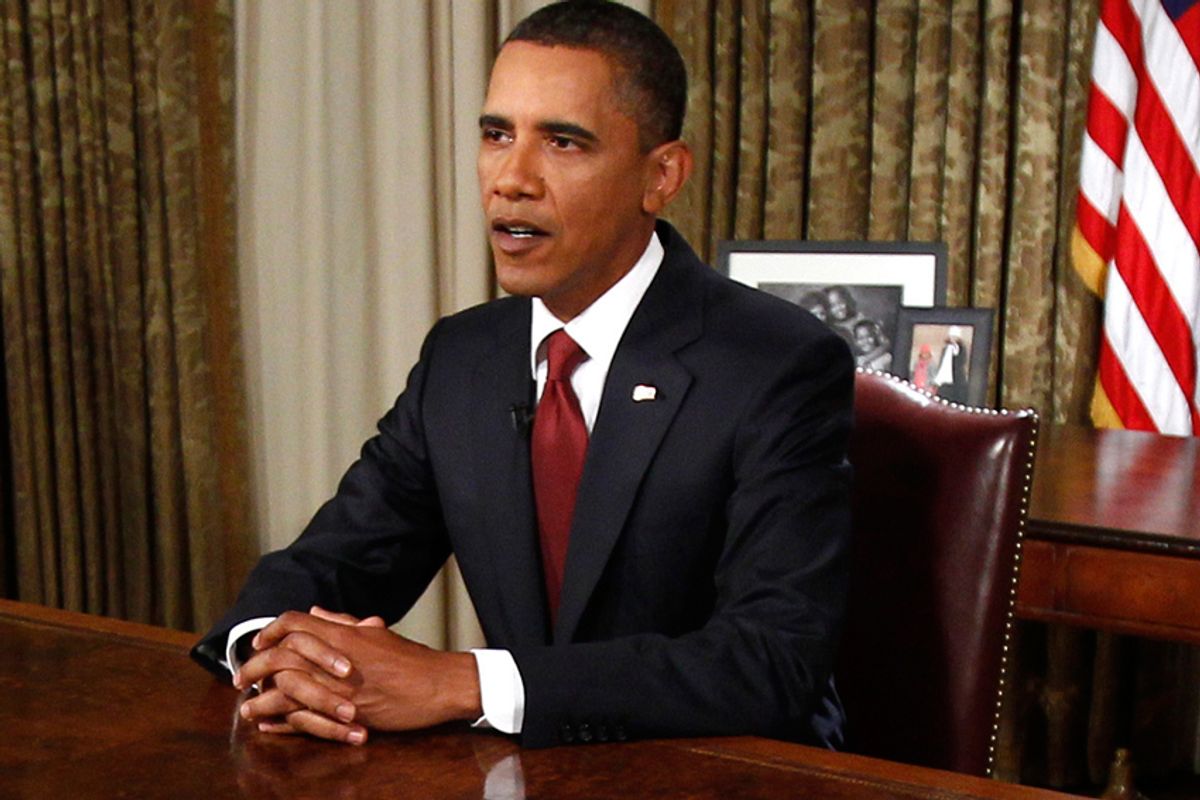 Barack Obama addressing the nation about the end of the U.S. combat mission in Iraq
--

Barack Obama, who once seemed the most fortunate of candidates, now looks like the least lucky of presidents. His speech announcing the conclusion of American combat operations in Iraq starkly illustrated the adversity he endures every day as the heir of George W. Bush, its desultory tone and flat delivery almost inevitable in speaking of a war whose human, economic and diplomatic costs have so far outstripped its benefits. The president obviously felt that he had no choice but to deliver this address, to mark this occasion, and even to praise the patriotic intentions of his predecessor, author of this grave mistake.

Somber as he sounded, the president was nevertheless trying to reassure us. His proffer of hope is that the fulfillment of his campaign promise to withdraw troops from Iraq will permit him to devote greater force to Afghanistan -- and to reinvest in pressing domestic needs. Having squandered a trillion dollars and probably much more over the past seven years, in other words, the government will eventually stanch our bleeding. In Iraq, anyway.

Today that is what passes for good news.

There was little in the Iraq speech that was exceptional with respect to language or policy, and not much that was exceptionable either. In his description of the current situation in Iraq, however, the president predictably indulged in optimism that is almost certainly unwarranted. He wants to bring American troops home, after all, so he insists that the Iraqis are moving beyond sectarian destruction toward a brighter democratic future. And he preferred not to dwell on the absence of an operational government and functioning services, let alone the dim prospects for ethnic and religious comity.

What the president could not utter, under any circumstances, is an accurate description of the war, the occupation and the ruinous reasoning that led to them.

He could not say, for instance, that the Iraqis are broadly resentful of the U.S. presence in their country and have wished to see us go for years. He could not say what even the most enthusiastic supporters of the Iraq war have been forced to admit: namely that peace in Iraq is tenuous and bloody civil conflict could soon break out again.

He could not say that the predictions of the war’s proponents, both within and outside government, proved to be entirely wrong -- from their claim that weapons of mass destruction would be discovered to their claim that Iraqi oil would pay the costs of the invasion and pacification to their claim that the overthrow of Saddam Hussein would result in a wave of democratic reform across the region.

He could not say that U.S. prestige and influence in the Mideast have declined sharply, or that our capacity to criticize human rights violations in other countries -- ruled by thugs like Saddam -- has suffered lasting damage due to our own illegal and brutal mistreatment of detainees in Iraq.

He could not say that the war and occupation resulted in historic levels of corruption, wasting hundreds of billions of dollars on ghost projects, phony public relations scams, and crooked Iraqi politicians and American contractors -- not to mention all the money that simply vanished in pallets of cash, without a trace.

He could not say that the misconduct and irresponsibility of the previous administration’s officials, including former Vice President Dick Cheney, former Defense Secretary Donald Rumsfeld, former proconsul Paul Bremer, and many others who botched the occupation so lethally, were a disgrace to the United States.

He could not say that imperial overstretch in Iraq inflicted lasting damage on our soldiers and our military infrastructure -- what he called the steel in our ship of state -- and that our standing has been diminished in the eyes of the world. And he could not say that the most lasting consequence of the invasion of Iraq, to date, has been to strengthen Iran, a rogue state that may well acquire the ultimate weapons of mass destruction.

He could not discuss any of those sour realities, aware of them as he must be, at a moment when his party’s majorities on Capitol Hill are threatened by the national atmosphere of defeat and gloom. Instead he fulfilled his duty as commander in chief by copiously praising the troops and noting, correctly, that patriots on both sides of the war debate honor those who served and suffered in Iraq. If he cannot speak the truth about the war, then he should at least be held to his other promise regarding the Iraq debacle: to ensure that America will not, in a final act of dishonesty and dishonor, neglect the soldiers whose bodies and spirits were wounded there.