Obama: Operation Iraqi Freedom is over

The president's Oval Office address on the official end of a long, pointless war 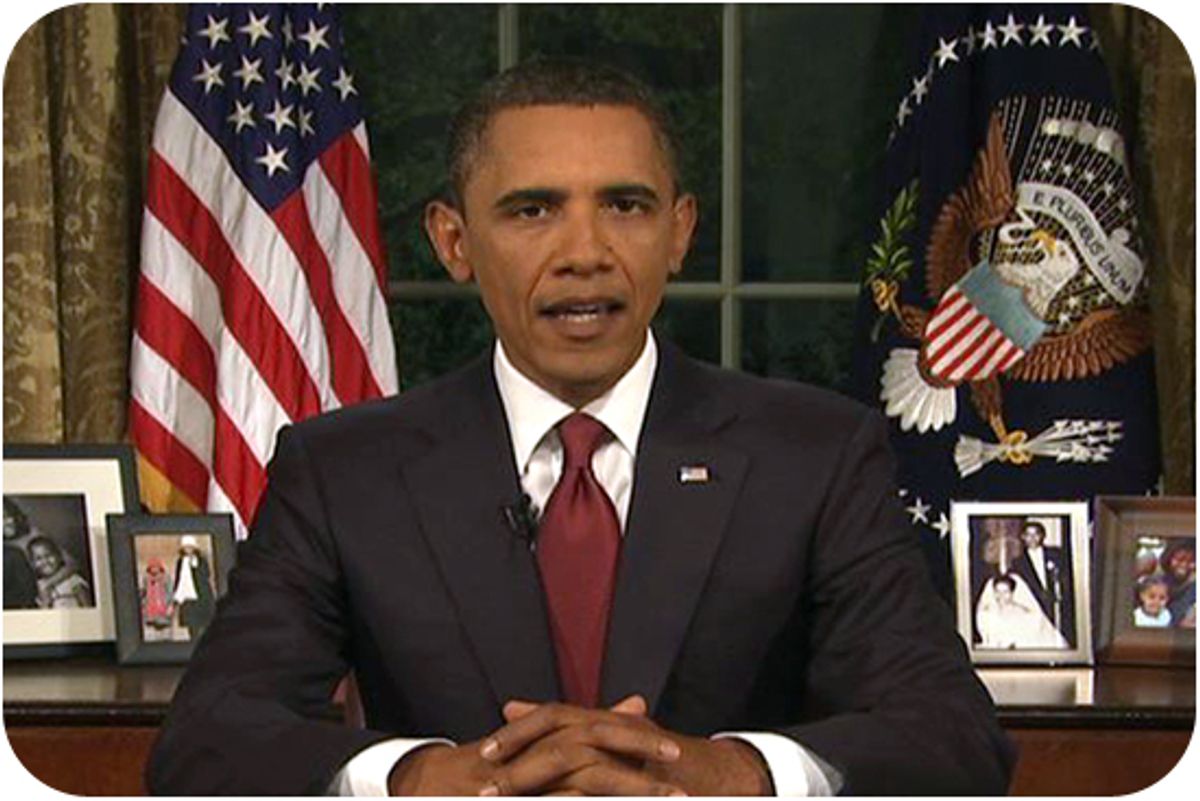 In this image from video, President Barack Obama speaks from the Oval Office at the White House on Tuesday, Aug. 31, 2010, about the end of the U.S. combat role in Iraq.
--

Good news! "Operation Iraqi Freedom is over." Iraq is free! Although instead of "free," President Obama just kept talking about all the "responsibility" we have given to the Iraqi people.

The president celebrated our technical compliance with the Status of Forces Agreement negotiated by President Bush and the Iraqi government with a somber speech from the recently redecorated Oval Office. (The curtains: terrible.) President Obama's full remarks are here.

Obama talked at length about the state of America at home. He mentioned our recession in the fifth sentence. He positioned the official end of the Iraq war not as our opportunity to refocus on Afghanistan, or defeating al-Qaida, but as the time to get America back to work.

I don't think it was a particularly great or memorable speech, and I also think it scarcely would've mattered if it had been a great speech in this media environment and political climate, but this is more or less the withdrawal we were promised, even if tens of thousands of troops remain, and some of them are sure to be killed in the months and years ahead.

The president reminded us that he never wanted this war to begin with, but he said it is "time to turn the page" on the disagreements of the early 2000s. And, at the end of the day, we all love the troops, very much.

The president brought up "responsibility" multiple times. The Iraqis are now responsible for rebuilding their own nation, after we upended it. We are now responsible for taking care of our veterans and getting back to work. "And, next July," the president said, "we will begin a transition to Afghan responsibility." So next year we'll be done with that war, too. (Depending, of course, on the "conditions on the ground.")

We are now able, we were told, to "go on the offense" against al-Qaida, which is made up of a couple hundred people located mainly in Pakistan. We were reminded, again, to be concerned about the deficit, but told, again, not to hold Obama responsible:

Unfortunately, over the last decade, we have not done what is necessary to shore up the foundation of our own prosperity. We have spent over a trillion dollars at war, often financed by borrowing from overseas. This, in turn, has short-changed investments in our own people, and contributed to record deficits.

President Obama doesn't want to be a war president, even if he'll eventually be defined, as most presidents are, by how he handled the wars. Presidents have more power over how we conduct ourselves abroad than they do over domestic issues anyway, as Obama's stressful first term is proving. So while we got odd campaign boilerplate about how "we must unleash the innovation that allows new products to roll off our assembly lines, and nurture the ideas that spring from our entrepreneurs" (and go ahead and add "end our dependence on foreign oil" to your Bingo card), we learned no more about how we'll achieve that than we learned about how we'll decide, next July, if Afghanistan is ready for us to leave, yet.

But Barack Obama didn't start these wars, and there's no good way to end them.