I hate smoking laws, but they helped me quit

Hats off to the prissy scolds of the world, and I mean it. Just don't write off the "nobodies" who still struggle 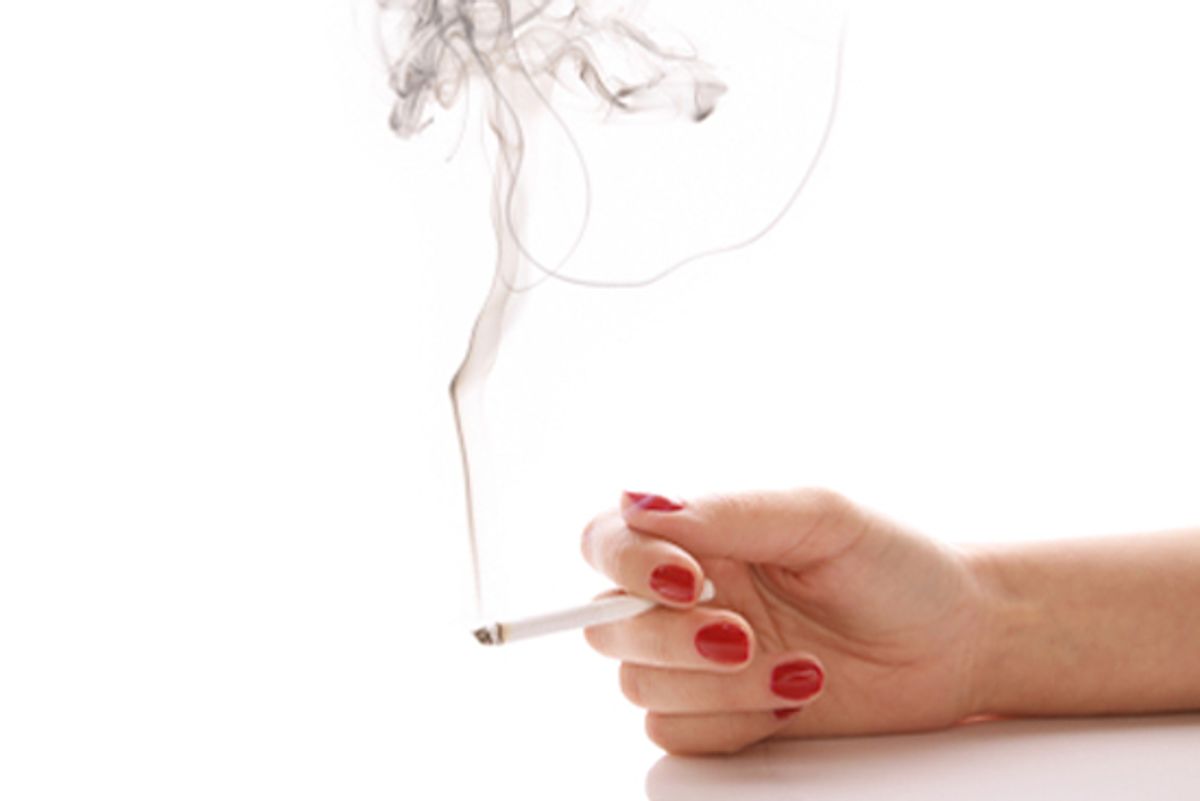 On the flight back from Madrid, I still had the kind of cough that sounds like someone struggling to start a recalcitrant lawn mower, the kind that involves all your muscles from the abdomen up and makes perfect strangers cringe -- half in sympathy, half in fear of getting whatever you've got. A week earlier, in an Edinburgh emergency room, I'd been diagnosed with a "chest infection," a term I'd initially understood to be British for "bronchitis," but now I was beginning to wonder if the doctor actually meant something more like pleurisy or pneumonia or TB or perhaps an army of sentient bacteria systematically slashing my alveoli with tiny knives. Seated next to me as I hacked was not my traveling companion (just as well, since it was killing her not to be openly pissed about how my illness had wrecked all sorts of plans, from mildly challenging day hikes to staying in cheap dorm rooms with strangers) but a pink-cheeked 10-year-old boy whose family had only been able to secure three seats together on the flight and had chosen him for exile to the back of the plane. As we took off, I chatted with him about his parents and baby sister and recent vacation, coughing all the while, occasionally apologizing and reassuring the child I'd been on antibiotics for a week, so I was unlikely to still be contagious.

Then, once we'd reached our cruising altitude and the captain had turned off all the relevant lights, I lit a cigarette. Of course. Finally. This anecdote should tell you at least two things about me: I'm a hopeless addict, and I'm not very young. I remember smoking on  airplanes, for god's sake. When I read articles that cast cigarette smokers as exotic, retro freaks or hear people refer to the constant smoking on "Mad Men" as some sort of historical curiosity, I have approximately the same reaction as I do when they talk that way about the show's sexism and racism: Maybe you haven't seen it out in the open recently, but that sure as hell doesn't mean it's gone -- and for the record, it hasn't been too terribly long since people didn't even try to hide it, most places. I'm 35 years old, and I've legally smoked not only in airplanes but in hundreds of restaurants and bars, dozens of airports, indoor shopping malls and concert venues, theater lobbies, college professors' offices, taxicabs, dorm rooms, hotel rooms and break rooms. Entirely "smoke-free" public places are really quite a recent development.

And as bad as it was to be sitting in a smoke-filled tube with an infected chest for several hours straight -- feeling horrible about blackening a perfectly good pair of child-lungs just a few inches away from me, no less -- the only thing worse would have been not smoking the whole time.

Did you think I was exaggerating when I said "hopeless addict"? I'm not, any more than scientists are when they say that for some people, cigarettes are harder to quit than heroin. While I can't speak with 100 percent certainty on the matter, never having tried heroin myself, I'm pretty sure I'm one of those people -- and believe me, I come by it honestly. The day my mother learned that her organs were shutting down and she would never leave the ICU, never again set foot outdoors where no one could stop her from lighting up, she sat up as straight as she could in bed and brought the pulse oximeter on her left middle finger to her mouth, inhaled deeply, formed an O with her lips and slowly exhaled. Then again. And again. She was smoking her last cigarette, goddammit. A nurse stood there openly gawking, and I couldn't even be offended, because what else would you do?

A few days later, I slipped a cigarette in next to my mother's body before the casket was closed and she was sent away to become smoke and ash herself. I believe she would have wanted that; I know I would have. That's what I mean when I say "addict."

Widespread disdain for smoking – and, inevitably, for smokers – has been around just long enough to seem like it's always been there. There are full-grown adults who can't conceive of a time when cigarettes weren't almost universally regarded as disgusting, let alone dangerous. Even I only became a hopeless addict after surgeon general's warnings and "Thank you for not smoking" signs were ubiquitous, and the dangers of secondhand smoke had been discovered (and given the prissy scolds of the world carte blanche to berate perfect strangers). Contrast that with my mother, who became a hopeless addict during an era when cigarettes still implied glamour and elegance, when you could count the number of nonsmoking public spaces on one hand, when presidents smoked openly instead of shamefully admitting that they can't quite quit, and nonsmoking hosts thought it only polite to offer ashtrays to guests. As the number of places where she was permitted to smoke steadily dwindled, and the naked disdain for her addiction increased, my mother must have felt like society was turning on her just for being who she'd always been.

I never felt that. I knew from my first drag that if I got hooked, I'd be saddled with a habit that would destroy my body and alienate other people; I just thought I wouldn't get hooked. After I did, I never denied it, never told myself or anyone else I was anything but a hopeless addict. And as the number of places where I was permitted to smoke steadily dwindled, and the naked disdain for my addiction increased, a funny thing happened: For the first time since I was a teenager, I sincerely wanted to be a nonsmoker.

I'd wanted to quit before, mind you (and I had, twice). Every day of my life, I'd wanted to be free of the health risks, the expense and the disapproval of friends and strangers alike. But despite all the excellent reasons to give it up -- heart disease, cancer, emphysema, the monkey on my back, the reeking clothes and breath, the unsettling combination of pity and revulsion on my loved ones' faces, blah blah blah -- I could never honestly say that I didn't want to smoke. There was the rub.

It took 18 years as a pack-a-day smoker (save a couple of short-lived quits) to get to the point where I truly did not want to be one, and when I quit for good on June 1 of this year, it was mostly because smoking had become an unsustainably huge logistical pain. To get through the most excruciating days and weeks of withdrawal, I didn't visualize healthy pink lungs or imagine what I'd buy with all the money I saved or how I'd spend the extra years of my life. I fantasized about sitting through an entire meal with my husband and friends, never feeling an uncontrollable urge to excuse myself and stand outside in the rain for a few minutes. I fantasized about spending a whole afternoon reading in the library or wandering through a museum or lying on the beach. I fantasized about getting to the airport two hours early, dealing with the inevitable delays, taking a long plane ride, and only being as miserable as a normal person through it all, instead of battling rising panic and the constant sensation that my skin was too tight.

So far, it's worked. I am a hopeless addict, of course, so ask me again in a year, but right now, I'm optimistic that I'll never start again, just because it would be too much goddamn trouble. So I offer my begrudging but sincere thanks to the anti-smoking crusaders who have worked tirelessly to shove people like me farther and farther toward the margins of society. Hats off to the prissy scolds of the world, really; I still can't stand you, but you've done a good thing here.

It's just, if I can be big enough to admit that, could you maybe spare a thought for someone like my mom, who was in the grip of addiction long before society made it humiliating and terribly inconvenient to smoke? Could you pause to consider that today, smoking is more common among working-class and unemployed people, and the disgust displayed toward smokers is doubtless a handy veil for some folks' feelings about those people? Could you think about the fact that around 20 percent of the adult population still smokes, so when you scoff that "Nobody smokes anymore," you are dismissing a whole lot of people as "nobody"?

I'm not asking you to hold anybody's hand or stand near them while they smoke; I'm just asking you to remember that smokers are and were real human beings, not statistics or historical curiosities or faceless, reeking beasts wantonly polluting the good folks' air. Disgust is a powerful agent of social change, to be sure, but we shouldn't forget that the effects of marginalizing, dehumanizing and erasing entire groups of people are never 100 percent positive. A few people on a sidewalk are not the "last smokers in New York"; they're just the only ones a certain class of people will ever see. There's a big difference.