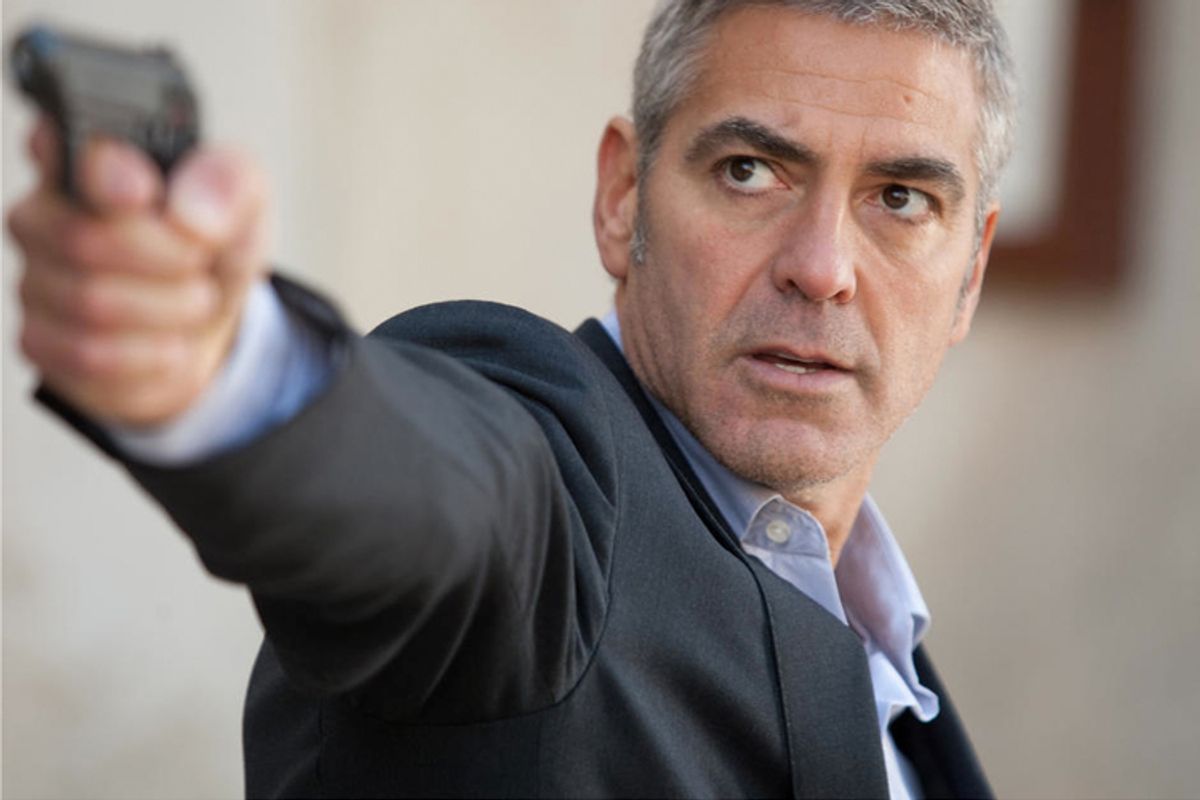 George Clooney in "The American"
--

Abstraction is where genres go to die. In the post-"Bourne" era, the idea of a lone operative working in the shadows, holing up in rustic European towns while dodging impeccably cutthroat, improbably glamorous enemies, seems almost quaint, even kitschy -- the cloak-and-dagger equivalent of a Hummel figurine. A hired killer, living by his own eccentric but determined code of ethics? How utterly darling.

Anton Corbijn's "The American," adapted by Rowan Joffe from Martin Booth's novel "A Very Private Gentlemen," works at the edges of the espionage genre, where reflexivity shades into self-parody. It's built from stock, salvaged from bits of countless other films, but rather than disguise that fact, Corbijn incorporates the rust of those worn-out parts into his design. We've been here before, and so have the characters, and everyone's grown tired of the game.

As the titular operative, George Clooney is torpid with the weight of his past. (We could call him Jack, or Edward, but having several names is as good as having none.) The only time he moves quickly is when his life is threatened, as in the film's opening sequence, when he and a comely Swede take a post-coital walk and chance upon an assassin's tracks in the snow. He pulls her close to a hillside with barely a word, ignoring her bewildered questions as he pulls a gun from his coat and fires into the trees. A man's body falls to the ground and he sends her to call for help--and then, the instant her back is turned, he shoots her in the head.

Ah yes, we think: She betrayed him, the latest in an endless line of double-crossing babes sent to lower the hero's defenses with their shapely wiles. But a terse phone call to his only contact (Johan Leysen) puts that mitigating possibility to rest. She was killed simply for being in the way, a casualty of his softening self-protective instincts. "You're losing your edge," his contact tells him, a sentiment so hoary it plays less like a line of dialogue than a fragment of collage.

Bypassing his contact's suggested refuge of Castelvecchio for the less aged-sounding Castel del Monte, Clooney sequesters himself in a picturesque Italian village whose population includes a solicitous priest (Paolo Bonicelli) and a curvaceous, milk-skinned prostitute (the excellently named Violente Placido) who takes special notice of the new face in town. Soon enough, a job comes through, custom-building a high-speed rifle for lethal beauty Thekla Reuten.

Clooney repeatedly protests that he's "no good with machines," but that's true only when he wants it to be. He may be no fan of cell phones, but he's a master craftsman, recycling used auto parts to build a sound suppressor for the assassin's rifle. (The task, retrofitting old parts to make something new, serves as an unflagged metonym for the film itself.) He works silently, using the chime of a church bell to hide the blows of his hammer, and with practiced precision. You get the sense that he might be the last practitioner of a dying art, an artisan in a machine-built world.

Corbijn, a veteran of music video and photography whose iconic images include the cover of U2's "Joshua Tree," made his feature debut with 2007's "Control," a word that fits "The American" just as well. The movie is stylized almost to a fault, its distant overhead shots turning mountain roads into wavy lines cutting through stony landscapes like ancient sand paintings. What interests him are not the story's particulars, the few that it has, but its textures. Although Clooney's existence is uniformly Spartan--he doesn't buy so much as a poster to furnish his small-town bachelor pad--Corbijn and cinematographer Martin Ruhe capture the sensual glow of sunlight by the river where Clooney goes to test-fire his creation.

That captivating locale, the site of numerous significant rendezvous, is a far more graceful evocation of the character's desire to transform his lot than the butterfly tattoo stamped between his shoulders. (Since when do covert operatives stencil themselves with identifying ink?) The latter fits in with a heavy-handed strain that runs through "The American," a tendency to double-underline what is already plain as day. Corbijn has a tendency to overstress the symbolic and neglect the practical, like the particulars of the relationship between Clooney and Violente. Perhaps it's unfair to reduce their burgeoning amore to the story of a prostitute who falls for the first john to show her something like kindness, but the fact that he interrupts his paid-in-full intercourse to go down on her isn't enough to banish the specter of a pernicious male fantasy.

What redeems the movie, and then some, is the soulful weariness of Clooney's performance, which is in some ways an earthier and less glib version of the go-go axeman from "Up In The Air." At a distance, "The American" looks like the kind of movie Clooney made before he knew what movies to make, the gruff, charmless characters he played when he was still trying to banish the specter of his charismatic "ER" cocksman. But there's a melancholy quality to his functional existence. When he tells the priest, who senses the presence of a sinner in need of redemption, "I do what I'm good at," it's with a mixture of pride and resignation. He's an old soldier in a world that's nothing but battlefield, an exile with no home to go back to.