A jar of her magic

I pickled the dilly beans with Nana when she was still alert and active. What will happen when I throw them out? 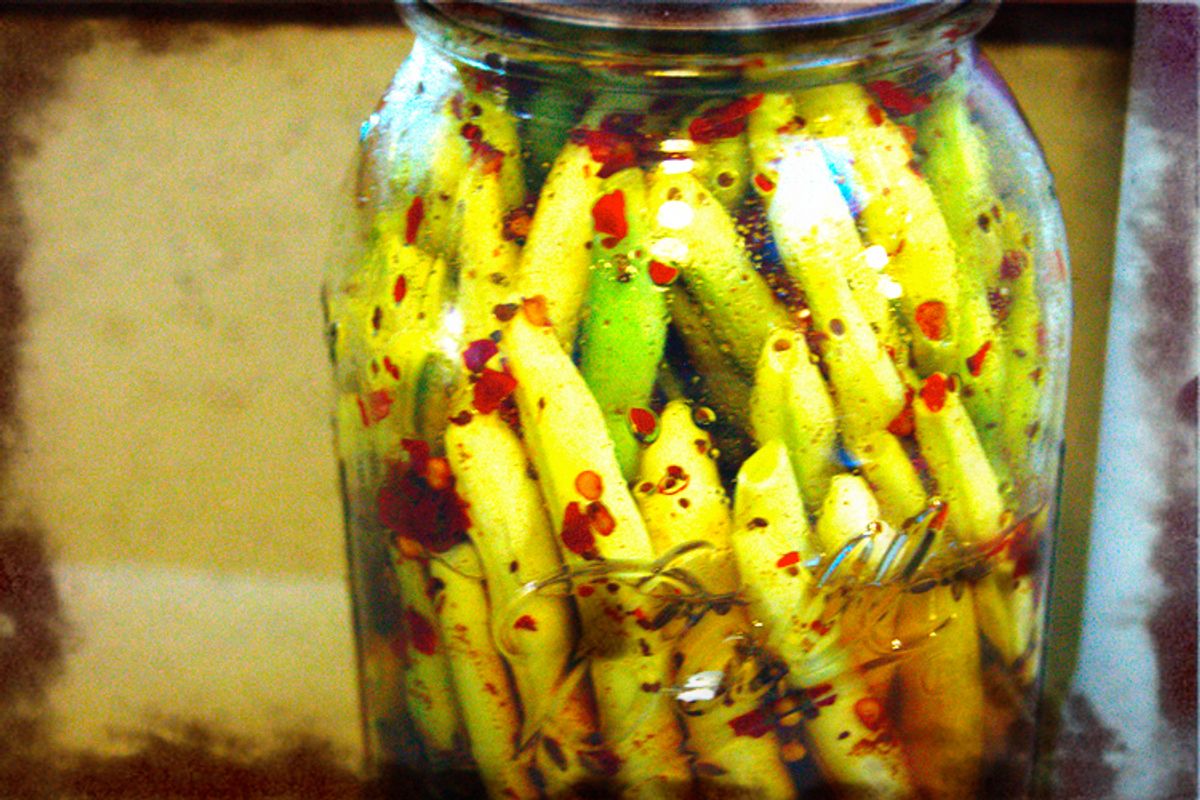 When I was a child, I spent weeks of every summer on the farm where my mother was raised, making things with my grandmother. There was so much to be done: wild strawberries, raspberries, blackberries and, once, gooseberries to turn into jam; beets and eggs and cucumbers and beans and crab apples to pickle, pies and zucchini breads to freeze, tomatoes and wax beans to put up in watery jars.

All those years ago, I didn't think it unusual to spend so much time making stuff. This had a lot to do with my grandmother, a woman who, when she was not preserving produce, was ceaselessly creating other kinds of goods. She spent her evenings at her handwork: The needlepoint and cross-stitch samplers she'd frame and hang on walls; she hooked rugs and sewed the odd quilt, made Christmas ornaments and wine cozies and doorstop covers. As a little kid, I followed her lead, pulling thick yarn through big-holed plastic patterns of butterflies and strawberries, later graduating to friendship bracelets, some small needlepoint and, briefly, origami. But eventually I graduated altogether, and grew into a young adult who did not spend the bulk of her time in the production of material goods, instead wiling away evenings reading, talking on the phone, watching television. I was not a maker.

Perhaps it is this mysterious but stark divergence of my adult experience from my grandmother's that accounts for the fact that I have a jar of dilly beans from 1999 in my refrigerator. Because despite the fact that I no longer did much material fabrication on my own steam, I never stopped loving making things with my grandmother on the farm.

As a young adult, in the years before Nana slipped into dementia and my mother and her siblings moved her to a different home, in the years before they rented that farmhouse with its gardens to tenants who could maintain it through the harsh Maine winters, I still visited every summer. And I marveled at my 80-something grandmother, who could still bend at the waist and pick tiny wild strawberries from the ground for hours at a time, then meticulously clean and hull them, stir them up with pectin and sugar and pour them into sterilized Mason jars, covering the ruby red gel with a thick layer of protective wax.

During one of these last sociable sojourns, I asked specifically to make dilly beans, the crisp, cold snappy green beans that, along with everything else that sat still long enough to be dunked in brine, my grandmother made into pickles and served as a side dish. I don't remember why I wanted dilly beans in particular. Perhaps there was a profusion of the verdant legumes, and I could not stomach the idea of putting up the limper, blander version of simply canned beans. Maybe I was just in the mood for them.

Whatever the reason, we made the dilly beans. There was nothing particularly profound about the process. My grandmother was slightly forgetful, very stooped, needling me in the way she did in those last cogent years about how I planned to find and keep a man. She probably did the bulk of the work: briefly blanching the beans, popping the garlic and dill and peppercorns into the jars, pouring the hot vinegar solution into each steaming glass vessel. I was probably slightly annoyed at her, slightly worried about her memory troubles, slightly anxious to get away from the farm, to take these beans and escape to the Maine coast, where my then-boyfriend and friends were already ensconced in a vacation rental house, a world away from the remote hill farm from another century. With my friends, I would eat the beans not as a side dish at supper in Aroostook County, but as a garnish in the strong bloody marys we would make throughout each day back in the real world -- my world.

I'm sure I did take the dilly beans down country with me. And I'm sure we went through most of them during the hard-drinking remainder of our week. But somehow, one jar of them didn't get eaten. They followed me back to Brooklyn, N.Y., and have stayed with me through two moves, two jobs, three cats, one book and now a marriage, all of which is more than I can say for my grandmother, who has been lost to dementia for years now, who knows nothing of me or my husband or my home or my work.

I cannot bring myself to throw the beans out, though I will never dare to eat them. I look at them crowding one corner in the back of an overstuffed fridge and think not that I made them, but that my grandmother did. They're her beans grown from seeds she put in the ground. They're in her once-sterile Mason jar along with her dill, grown on the hill that I haven't climbed for far, far too long now.

I live in Brooklyn and it's not like we don't have dilly beans here. Here in the outer boroughs of New York, a world so far away from Aroostook County, we now live in another century of food preparation, and I make more of my own foodstuff than I have in decades: tomato sauces and jams and bacon and pickled onions and seltzer. I could find a (possibly superior or more fail-safe) recipe for dilly beans and whip up a batch from the organic farmer's market in about an hour.

But my grandmother's hand would not touch those beans, her hot water, drawn from the well deep beneath the hill, would not scald the metal lids of the Mason jars; they would not cool on her round kitchen table, and her spidery handwriting would not adorn the identifying sticker on the outside of their jar.

And there is some magic in there. Something of her that I wonder if we accidentally pickled alongside the beans, more than a decade ago. Of course it’s this imagined spell -- a child’s love for her grandmother combined with a child’s tendency toward the maudlin and the overwrought -- that has kept me from tossing the beans. But I will not pretend that I haven’t also wondered -- in these sad years in which my grandmother's strong, flexible body has continued to function but her mind and recognition and mental capabilities have been extinguished -- if I have perhaps had a hand in keeping her alive longer than necessary. That if, perhaps, I threw out the dilly beans, my grandmother's empty body might mercifully follow.