Treasury Secretary Bloomberg? Not a chance

Why would the Mayor of New York want such a thankless job? And why would Obama want him? 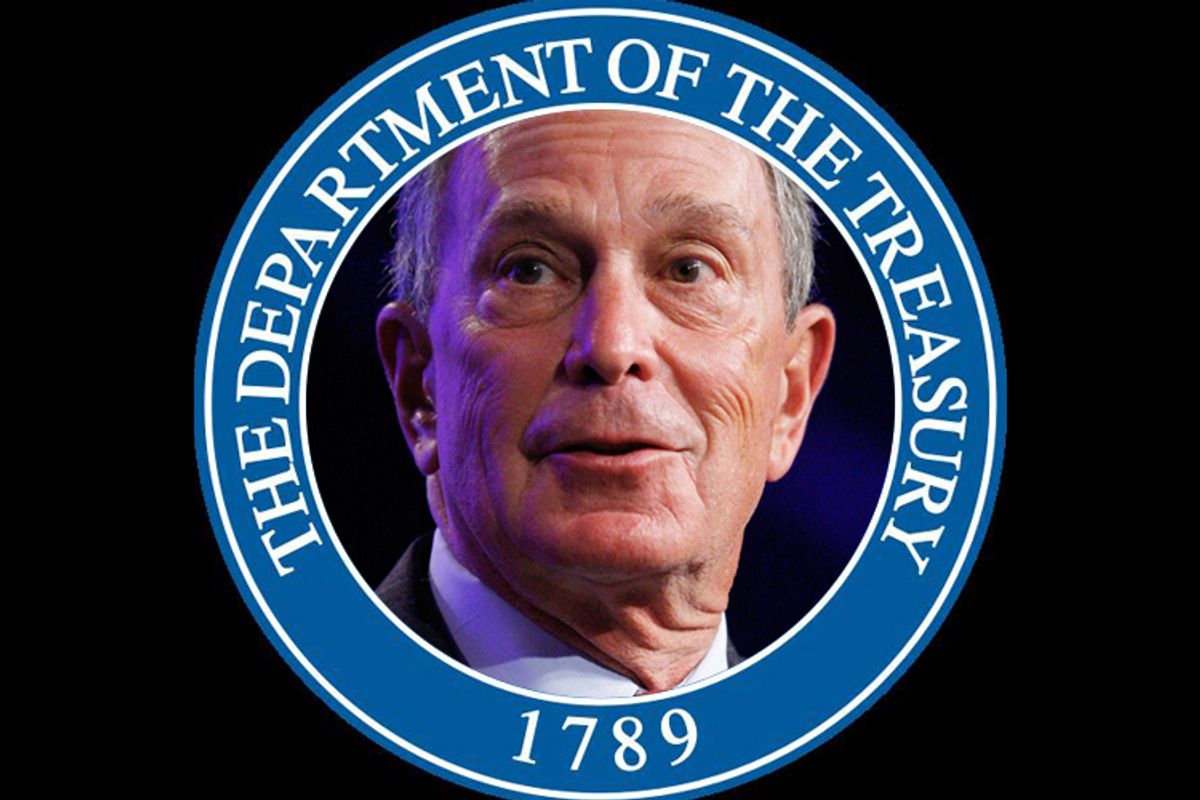 Last November, the New York Post suggested that the Obama administration was considering JP Morgan CEO Jamie Dimon as a possible replacement for Treasury Secretary Timothy Geithner. The notion was ridiculous for an abundance of reasons, indeed, with each day that has passed since then, the idea has become even more absurd.

But is the Post chastened? Hardly. Today, the Post is backing a different horse for the same job: New York Mayor Michael Bloomberg.

Now there are whispers that the president went even further and sounded out Bloomberg about whether he would join his foundering economic team as treasury secretary, replacing prime blame-target Timothy Geithner.

"Obama needs Bloomberg more than Bloomberg needs Obama," a source tells us. "Obama's looking to do something bold and credible before the election."

Let HTWW state for the record that the prospect of Bloomberg moving into the Obama cabinet, while not as risible as Dimon's chances for the same job, is also just as unlikely.

Let's put aside the Post's methodology here, which appears to be just to make things up if there's any chance they can be spun to create the impression that the Obama administration is flailing around. Never mind that -- why would the Mayor dream of moving to Washington in the first place?

Bloomberg already has a demanding, high profile job where he actually has executive power. Why would he exchange that for the job of Treasury Secretary, where he would find himself stuck in a miserable no-win situation? No matter what happens in November, I'm guessing that the Obama administration is going to be pretty constrained on the economic front. Bloomberg will face the same unpalatable dynamic we've seen all year. The left will be upset because Treasury isn't doing more to get the economy going, while the right will be outraged if Treasury attempts to do anything at all. Unemployment will stay high, and anyone in a position of supposed authority will get blamed. Run away!

But here's the real kiss of death. According to one "insider," Bloomberg is a great choice because "he's very well-liked and well-respected on Wall Street."

Wonderful -- that's exactly what will get the Democratic base all pumped up to go out and vote in November. Because what Obama really needs right now, is more cabinet members who are well-liked by Wall Street. If Obama wants to make a "bold and credible move" right before the election, all he needs to do is appoint Elizabeth Warren to run the Bureau of Consumer Financial Protection.