James Jay Lee's act was fueled by disdain for baby reality programming. Clearly he didn't get the shows' message 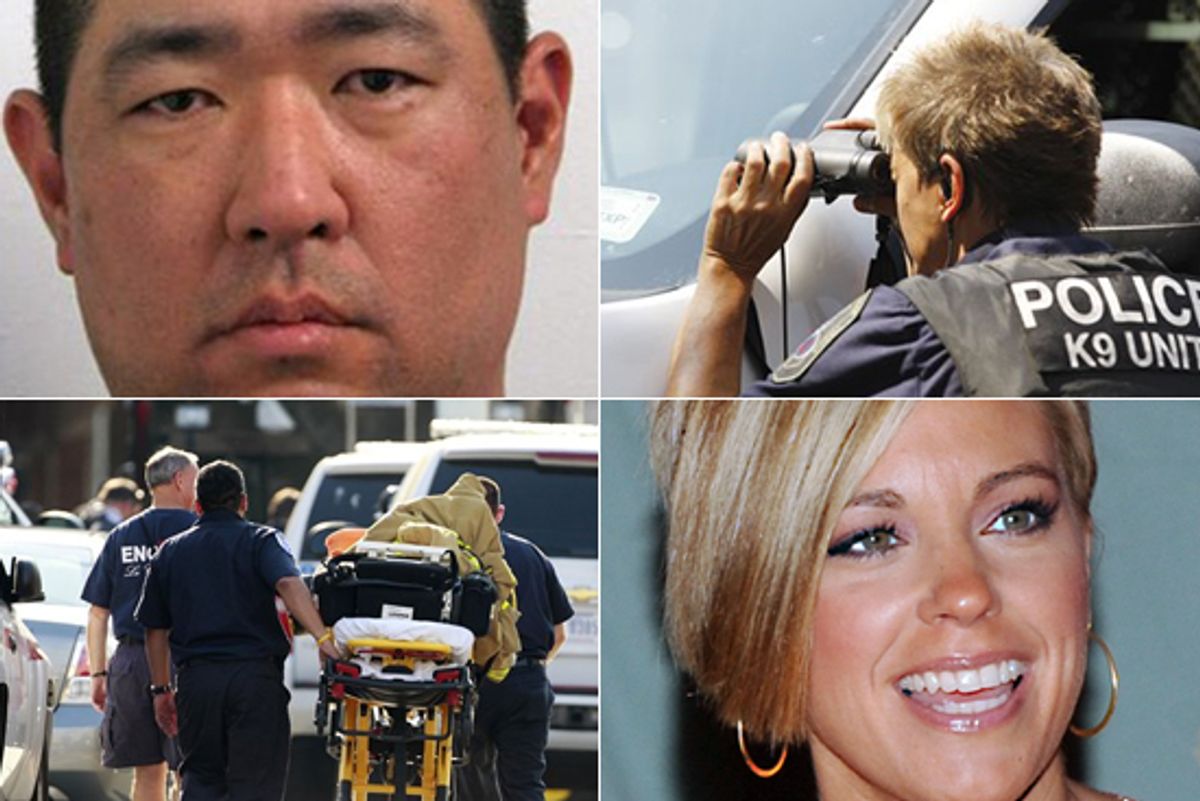 In this image released by the Montgomery County Police, James J. Lee is seen is a booking mugshot from 2008 on disorderly conduct. Lee, 43, a gunman with what police described as "concerns" with the Discovery Channel networks took at least one person hostage in the company's Silver Spring, Md., headquarters Wednesday, Spet. 1, 2010. A law enforcement official speaking on condition of anonymity because the investigation is ongoing said authorities have identified Lee as the likely suspect. (AP Photo/Montgomery County (Md.) Police) (AP)
--

Yesterday, a crazed gunman wearing explosives took control of the Discovery Channel building in Silver Spring, Md. Online, you can read his manifesto, as well as dozens of message board posts, especially here, in which he rants about Discovery's programming. Why did he single out Discovery, of all the innocuous cable channels? Who knows: He's a crazed gunman. But the reams of screeds and ALL CAPS RANTING can be summed up in one demand: Get those baby reality shows off the air!

I covered yesterday's hostage-taking, and once edited a story about a woman's addiction to TLC's baby programming, so it was fascinating to see soft-focus baby world and national crime come together in one messy, scary afternoon in Maryland. The siege ended with some shaken-up but unharmed eco-conscious employees and one dead gunman, James Jay Lee. Lee was shot by a police sniper when he reportedly raised his handgun to a hostage.

Lee (who, it must be said, bears an unfortunate resemblance to Jon of "Jon & Kate Plus 8") had been staging confusing and poorly attended "Save the Planet" protests in front of the Discovery building for years. He was arrested in 2008 for flinging a bag of money around and causing a mini-riot. Ultimately, he was motivated not just by an obsession with Malthus but by the cable channel's longtime commitment to shows like "A Baby Story," "Babies: Special Delivery," "House of Babies" and, of course, "Babies, Babies."

On his list of demands, Lee's No. 2 was: "All programs on Discovery Health-TLC must stop encouraging the birth of any more parasitic human infants and the false heroics behind those actions. In those programs' places, programs encouraging human sterilization and infertility must be pushed. All former pro-birth programs must now push in the direction of stopping human birth, not encouraging it." No. 10 was: "Stop all shows glorifying human birthing on all your channels and on TLC."

Obviously, Lee was a lunatic, and in spite of his copious writings about overpopulation and immigration and Discovery's weapons shows, no one really knew exactly what he was talking about. But if you spend hours reading his diatribes (as I did yesterday) you can see that his central preoccupation was that babies are an abomination. He took issue with Discovery's seeming celebration of fertility, as on shows like the Duggars' "19 Kids and Counting." (He seems to have missed the point of watching those multiples shows, which is not to envy but to gawk.)

What is true, though, is that those shows also make no sense whatsoever to people who have not been pregnant or been around pregnancy or babies. They seem scary and intense and cryptic. Also, gross.  Before I was pregnant I flipped by those shows a couple of times and was baffled by the panting and the drips and the obscure talk of "meconium." Now that I'm four years post-childbirth, I am bored by those shows, as bored as I am by talk of required college courses, which I studied for, passed and forgot about long ago.

But in those months of pregnancy I found it hard to turn away. I was fascinated by how different each birth was, and each pregnancy. The women who seemed so calm and then fell apart with the first contraction. The seemingly neurotic who became eerily cool during transition. For those months, I was in on a cosmic mystery that was playing out on these shows. Maybe they were too melodramatic or sappy or lame, but they were talking about what I was thinking about. We understood each other.

Lee, as far as we know, did not have children. He found children repellent, because overpopulation threatened the animals. "Nothing is more important than saving them," he wrote. "The Lions, Tigers, Giraffes, Elephants, Froggies, Turtles, Apes, Raccoons, Beetles, Ants, Sharks, Bears, and, of course, the Squirrels." Of course, the squirrels!

So he didn't get those TLC shows, and we didn't get him. And in the end, the whole crazy showdown proved, reassuringly, that one maniac with an earmarked copy of Daniel Quinn's "My Ishmael" is no match for the human desire to keep the species going. Lee is dead now. And babies are still being born every few minutes on TLC.