Hoecakes so good they might make you a Southerner

Browned crisp but soft and warm, these pancakes are the first step to my regional conversion 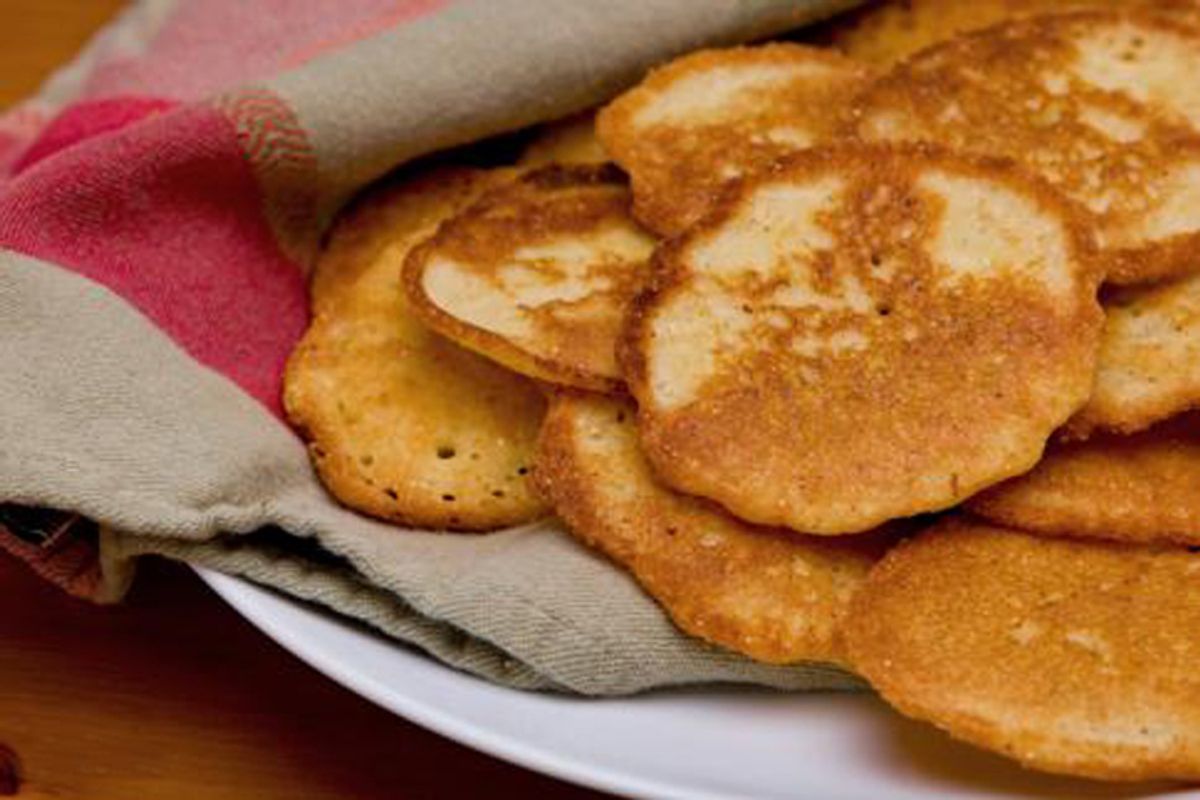 I've always wondered what it would be like to live among the romantic souls of the South, to breathe in their folkways, so different from mine. To speak their language and sing their songs.

And oh, their food. I wanted to taste their food. The way Southerners wrote about their food made me drool. Finally, moving to Gainsville, Fla., two years ago, I had my chance when an equally fascinated Colombian biologist friend came to me with a thrilling invitation.

"Oh, I found this restaurant that has this Southern food!" Luz told me. "I'm going with my friend for lunch. Want to come?"

"That would be awesome. What's this place called?"

She inhaled in happy anticipation. "Cracker Barrel!" (Luz went so far as to marry a guy from Tennessee. Her now-former mother-in-law made killer fried green tomatoes.)

I knew Cracker Barrel was the tourist version of Southern cuisine, and it only whetted my appetite for the real thing. This meant I'd have to find a friendly local who could teach me more about it. But where would I find such a person? Rumor had it the old-line Southern natives in my little college town resented -- and hence, avoided -- the Yankees and foreigners attached to the university where I worked. After all, people who put tempeh on their pizza and drink unsweetened iced tea are not to be trusted.

Then I remembered that I actually knew a real live Southern lady. And I'd been sitting across the table from her on Monday nights for months.

Susie Baxter heads a writing group I belong to, and is a proud native Floridian, born and raised in rural Suwanee County. (This is the north-central part of the state, just east of the panhandle.) One of the first things newcomers learn about Florida is that the more north you are, the more South you are: Suwanee County is closer geographically and culturally to neighboring Alabama and Georgia than to faraway Miami or Palm Beach.

Susie's memoir-in-progress about her childhood in Suwannee County is a delicious mélange of everything Southern: quiet dirt roads, a homemade rope swing hanging from an ancient oak in the yard, dusty tobacco fields, mysterious bullet holes in floorboards, and, of course, lots of food -- all cooked lovingly on a wood-burning stove, almost all grown on the family property.

Meals in Susie's childhood were filled with all those mysterious Southern foods I'd read about for years, but never actually tasted. Among these are hoecakes.

The term "hoecake" is used across the South to refer to a number of different griddled flatbreads, ranging from simple mixtures of cornmeal and water to white-flour-based breads resembling giant scones. The name "hoecake" recalls the old tradition of cooking the cakes on the back of a hoe. (Most sources spell it as two words, but Susie spells it as one, and I'm following her lead -- and recipe -- here.)

Susie's family's version is a cornmeal griddle cake enriched with eggs and milk. Her family often had them with meals in place of biscuits or bread. Here is Susie's description of her family's recipe, from her upcoming memoir, "I, Susanette ..."

Mama often made hoecakes for supper, instead of cornbread or biscuits that required a hot oven, which heated up the house. To make hoecakes, Mama measured the ingredients very precisely -- a handful of freshly ground cornmeal, a half a handful of flour, a clump of lard, an egg or two, a pinch of salt and baking powder, and just enough fresh cow milk to make the mixture into a batter.

She checked the temperature of the iron skillet by sprinkling a few drops of water in it. When the water danced, she knew it was hot enough. She poured the batter into five separate puddles, cutting off the stream as each puddle spread to three or four inches. In less than a minute, bubbles formed on the surface of the puddles and began to pop, an indication that it was time to flip them. Her hoecakes always turned out brown and crispy on the outside but soft and warm inside.

Like biscuits and cornbread, hoecakes can be eaten with either savory or sweet accompaniments. At her childhood meals, Susie used them to block out the taste of turnip greens, which she hated. If she managed to get down enough of those dreaded greens, she also got to have hoecakes for dessert, drizzled with cane syrup.

Susie's mother made her hoecakes from homegrown corn (which her family brought to the mill to be ground into meal) and home-pressed cane syrup. For city girls like me and Luz, this is as strange, exotic and wondrous as food can possibly get.

Amazingly, I lucked out on my first attempt to re-create Susie's mother's recipe. Since Susie is small-boned and petite; I guessed her mother may have been as well, so "a handful" would have been about half a cup at most. To get the combination of crunchiness and softness, the batter would need a lot of fat and tenderizers such as milk and eggs, so I interpreted "a clump" of lard to mean about a quarter of a cup. I actually pan-fry the cakes in a generous amount of oil to ensure crunchiness and even coloring, but the recipe would work with a more conservative amount of oil as well. I'm not sure exactly how close this comes to the original, but it does fit Susie's description perfectly: The cakes are brittle and crunchy on the outside, soft and almost creamy on the inside. They look like ordinary pancakes, but their texture is distinctly different -- and a lot more interesting.