Why I do not "(heart) boobies" 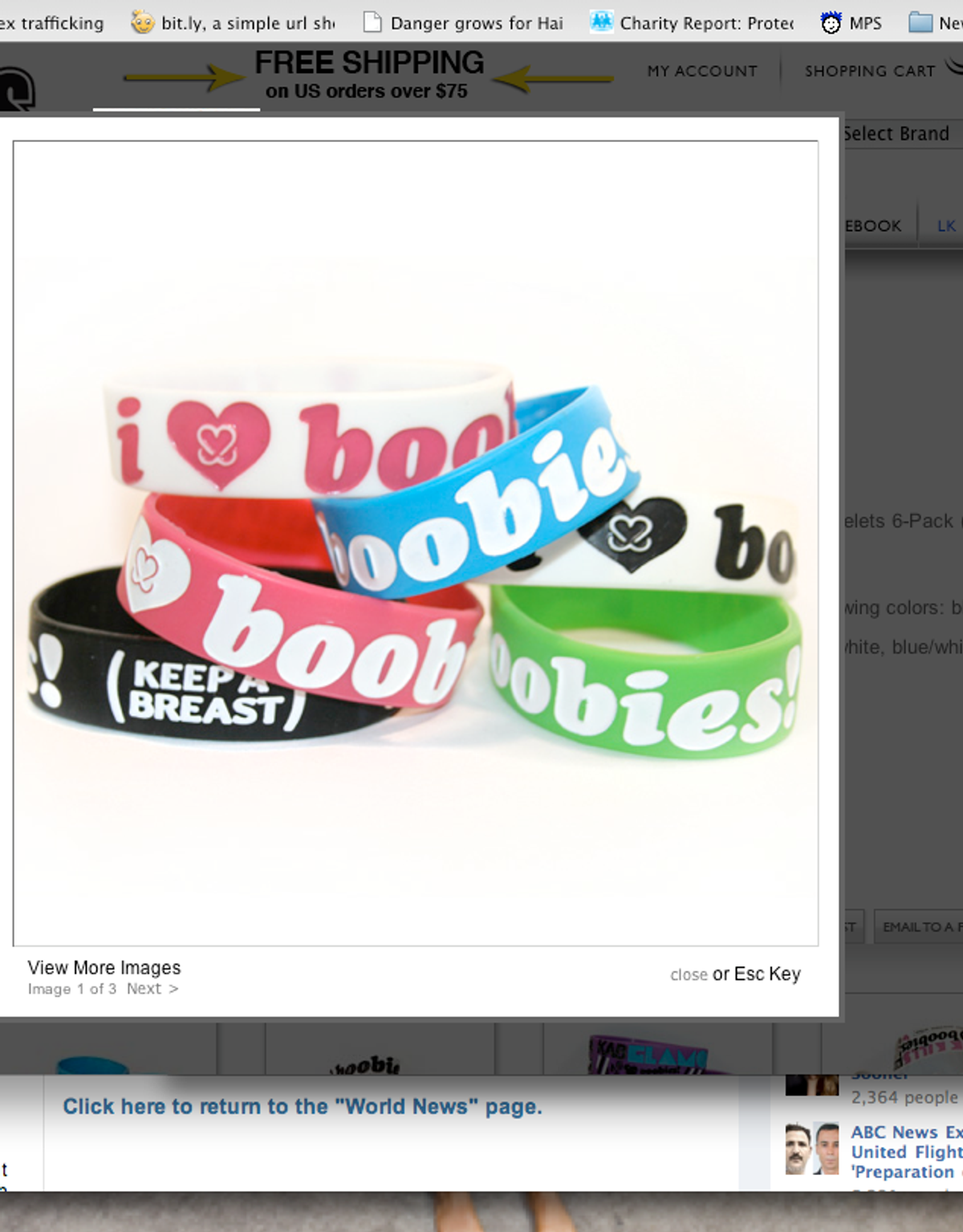 Schools across the country are banning rubber bracelets benefiting breast cancer activism -- all because they read, "I (heart) boobies." Administrators and parents are reacting to "boobies" as though it were a corrupting four-letter word from which we must protect our nation's youth. As though breasts themselves were obscene. As though they weren't a normal object of teenage lust. As though the First Amendment didn't exist.

But, you know what? I'm offended by the bracelets, too -- just for a very different reason.

A growing number of activist campaigns are attempting to raise awareness (and perhaps other things) by simplifying the fight against breast cancer as a fight to save breasts. Not people, but breasts. Of course the implication is that lives will also be saved, but "boobies" are treated as the real star of this show. There was the infamous "Save the Boobs" ad, with a pair of bouncing bikini-clad breasts; the Men for Women Now campaign, which features famous(ly fratty) male celebs waxing poetic about breasts; the push for women to reveal the color of their bra in a Facebook status update; and the Booby Wall -- just to name a few.

I've always found this approach to awareness-raising rather tasteless, but it wasn't until my mom was diagnosed with metastasized stage IV lung cancer that they became truly enraging. Not  only are women reduced to their breasts, but men are reduced to their love for breasts -- as though they will only pay attention to the cause if presented with a pair of luscious, jiggling tits. Over the last few months, I've watched my dad give my mom shots twice a day, methodically dispense her meds, drive her to appointments, wash her hair, rub her feet, sit with her in the hospital for hours and hours and hours on end. He does it without complaint; there is simply nothing he would rather be doing, given the circumstances. It isn't her lungs or her hair, now gone, that he loves -- it's her.

That isn't to say that you don't think about the diseased body parts: I stared at my mom's bone scan until I had memorized the location of each of the glowing white spots scattered from femur to collar bone. When we got a digital copy of her CT-scan, I obsessively clicked through the cross-sectioned images of her body, examining her intestines, uterus, diaphragm, heart and lungs. She is so much more than the sum of her parts, though. When it's an incurable case, when the prospects of survival are bleak, you aren't thinking about how much you love "boobies," or whatever the diseased body part may be, you're thinking about how much you don't want your loved one to die.

When death is truly knocking at your door -- and I'm not talking about early, uncertain cases -- most aren't thinking about how much they love their breasts, they're thinking about how much they love not being dead. They're thinking: Chop those things off, now. Women subject themselves to the pain of chemo and elect to watch their hair fall out; they do this not to save their precious secondary sexual characteristics, but rather to live another day, because it's worth it, breasts or no breasts.