The last days of my mother, the control freak

Mom made meticulous plans for everything in life, but when she neared the end, she wasn't sure what they were 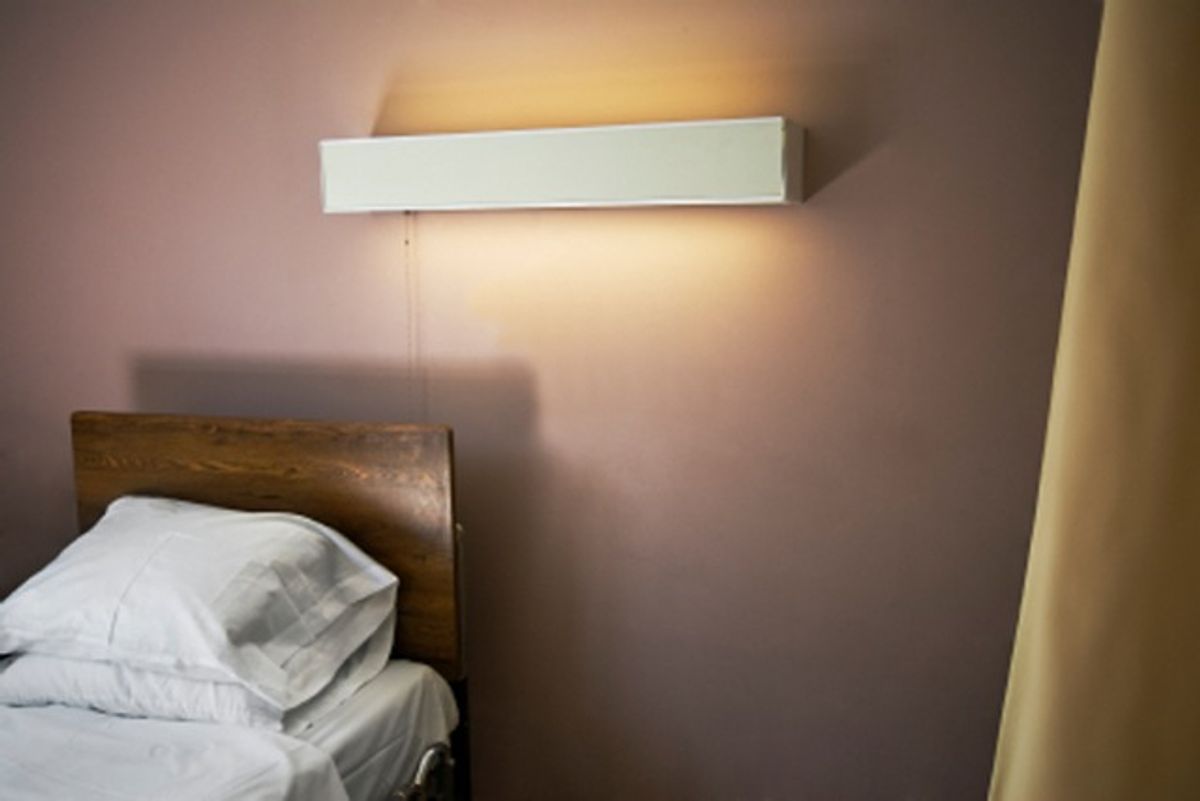 Two weeks after my mother's final stroke, it occurred to me she might not know she was dying.

The symptoms of her impending death were all there. She was too tired to open her eyes. She was subsisting on ice chips the size of a baby's fingernail. Her extremities were cool, the traffic in her veins so lazy that the hospice nurses couldn't find a pulse. Her breathing would cease for many seconds, then resume with a deep drag -- until the next hiatus. She fiddled with the bedclothes and asked me what that dog was doing in the room. There was no dog.

"Do you know you've had two more strokes?" I asked her.

I wasn't surprised by her surprise. All year she'd expressed fresh astonishment each time she was informed of her condition -- the first stroke that robbed her of memory and sight; the second and third that rendered her more demented, and incontinent; the fall that fractured her hip and propelled her further into frailty and confusion. "This is the first time anyone's told me!" she'd declare.

My mother was a woman proud of being in charge. In fact, she could bear hardly a moment of not knowing what was coming next, of intellectual ambiguity or emotional irresolution.

This anxiety had practical outlets. At the various agencies she managed, she'd designed systems that were still in use decades later. Her closets were immaculate; a week's worth of dinners were cooked and frozen each Sunday.

But her allergy to ambivalence also made her impulsive and controlling. Unsure how to live with my father as he descended into Alzheimer's, she'd moved them from Manhattan to an assisted living facility in Ithaca and back three months later, $30,000 poorer. If you visited her summer house, she had every second accounted for and was perpetually pushing you on to the next activity: Finish breakfast so we can go for a hike. Hurry down the mountain so we can get back for lunch. Eat the soup, clear the table for pie ...

Like everything else, dying and death were written into the agenda. She and my father signed living wills in their 50s and periodically renewed them, checking off the boxes to decline extraordinary -- and in some cases ordinary -- measures to prolong their days if there was little promise of a decent quality of life. Every few months she mailed me an updated sheet containing their Social Security numbers, insurance policies, bank account balances, and so on.

Then, six months before her 90th birthday, three blood clots migrated from her heart to her brain, and the woman who had walked two miles and practiced the piano daily, kept the books, distributed leaflets for peace, and organized a social life to rival Marie Antoinette's could no longer make toast or remember her phone number. Her beau, unable to cope with her new needs, asked her to leave the apartment they'd shared for eight years.

Perched on the examining table a few weeks after returning from rehab, my mother wept to her gerontologist. "I have no say anymore," she kept repeating. The crowning proof of her lost autonomy: She possessed neither the courage nor the cognitive ability to commit suicide.

Now, I didn't want my mother to be the last to hear the momentous news -- and I wanted her to have a say. "Mom," I asked, "are you aware that you're dying?"

Her face registered surprise again, then trouble. She shook her head, as if to deny not knowledge of the fact but the fact itself.

Technically, she had a point. My mother was performing every end-of-life act on schedule -- except dying.

According to the death-and-dying websites I pored over while she dozed, today's surge of energy and hunger was another typical end-of-life sign -- or not. A friend's husband had swung his legs over the side of the hospital bed, ordered breakfast, delivered a disquisition on the role of the Menscheviks in the Russian Revolution, and 12 hours later was on his way to that great soviet in the sky.

On the other hand, Mom's nurse Jeff had a patient who'd asked for a pastrami on rye, gotten up, and lived another year.

This morning on the phone, Jeff concurred that Mom probably couldn't down a pastrami sandwich; she coughed on a half-teaspoonful of water. He suggested we try applesauce, but wanted to check her swallowing first.

To tell the truth, I hoped he'd pronounce her unable. Mom and I had discussed the options for checking out. The only one that didn't involve my committing a felony was for her to stop eating and drinking. But I knew she couldn't do it. Food had become Mom's only pleasure.

Now, at last, her body was taking on the job. Her appetite gone and her throat muscles compromised, she was on the way to fatal starvation and dehydration. Then this morning she'd said yes when her caregiver asked if she wanted something to eat.

Was this a habitual response? (In the last months, she never refused a snack.) Or was she actually hungry?

Did she desire just to eat -- or to live?

It seemed the right moment to review the wishes she'd set down in her advanced directive. Feeding tube? No. Intravenous nutrition? No. Her answers were nearly inaudible, but emphatic.

Now came the part between the little boxes on the document -- the part, it turns out, that covers much of dying. "So, OK," I began. "You have a choice. We could keep giving you the ice chips whenever you want them, and keeping your mouth wet, and you would die -- pretty soon." I paused to let her take that in. "Or we could start feeding you again. You'd still die," I said, "but more slowly."

Moments passed. "Do you understand?" I prompted.

She nodded that she did, then turned her head to me: "What's the prognosis?"

I wasn't going to lie to her. "Well, Ma, I gotta say: It ain't good. You're half-paralyzed. You'll never walk again. You're not going to get your mind back, and your sight is only getting worse."

I laughed at this astute summary of the situation.

This was turning into the most cogent conversation I'd had with my mother in six months.

I felt her drifting. Was she thinking about it, too tired to think about it, unwilling to think about it? Then she spoke slowly, almost soundlessly, but with crystalline clarity: "To tell you the truth, I feel pretty ambivalent about the whole thing."

To appropriate St. Augustine, my mother wanted to be dead, but not yet.

Jeff came an hour later. In the living room with my partner, Paul, and me, he confirmed that food would stall, but not forestall, Mom's demise. Still, if she wanted to eat and could, we should let her eat. "Hospice isn't about hastening anyone's death," he said. Then he excused himself to examine my mother and came back to tell us her throat muscles were too impaired to admit food or even water. The decision was made: keep on with the ice, and wait.

I was relieved, and not just about resolving the dilemma at hand. The last year had overtaken my life, demolished my ability to work, and roiled a fragile détente with my brother. Full-time care was draining my mother's savings. I'd badgered her doctor to discontinue her meds and let nature takes its course. He said the drugs were bettering her quality of life. I countered that they were prolonging her death. I kept telling him she was ready to die -- she kept telling me she was. We all knew I was ready for her to die.

Now that she was "actively dying," however, it seemed she was up for prolonging her death with every ounce of life she had left. And why not? She was in no pain. Her caregivers were swaddling her in meticulous attention.

And she finally had what she'd wanted all my life: me. Her prickly daughter was at her side, doting with inexhaustible patience, anticipating her every need, acknowledging her every feeling -- loving her. Paul and I joked that just to get even, she would live forever. (Or at least until the next thing on her agenda.) My mother had been giving advance directives all her life. The living will was just the ultimate one.

But here's the thing: Plan all you like, you can't know the territory of dying until you arrive. And then there is nothing like the glint off the Grim Reaper's scythe to blind you to the path you thought you'd mapped.

My mother was desperate to get there, then wasn't so sure. She hung on for what to her must have been an interminable period of indecision -- living an entire month on nothing but ice chips.

On day 30, I again asked if she knew she was dying.

This time she nodded her head yes.

Her face was calm, her voice less than a whisper. Yes, she said. She was ready.

Judith Levine is a journalist and author of four books, most recently "Not Buying It: My Year Without Shopping."