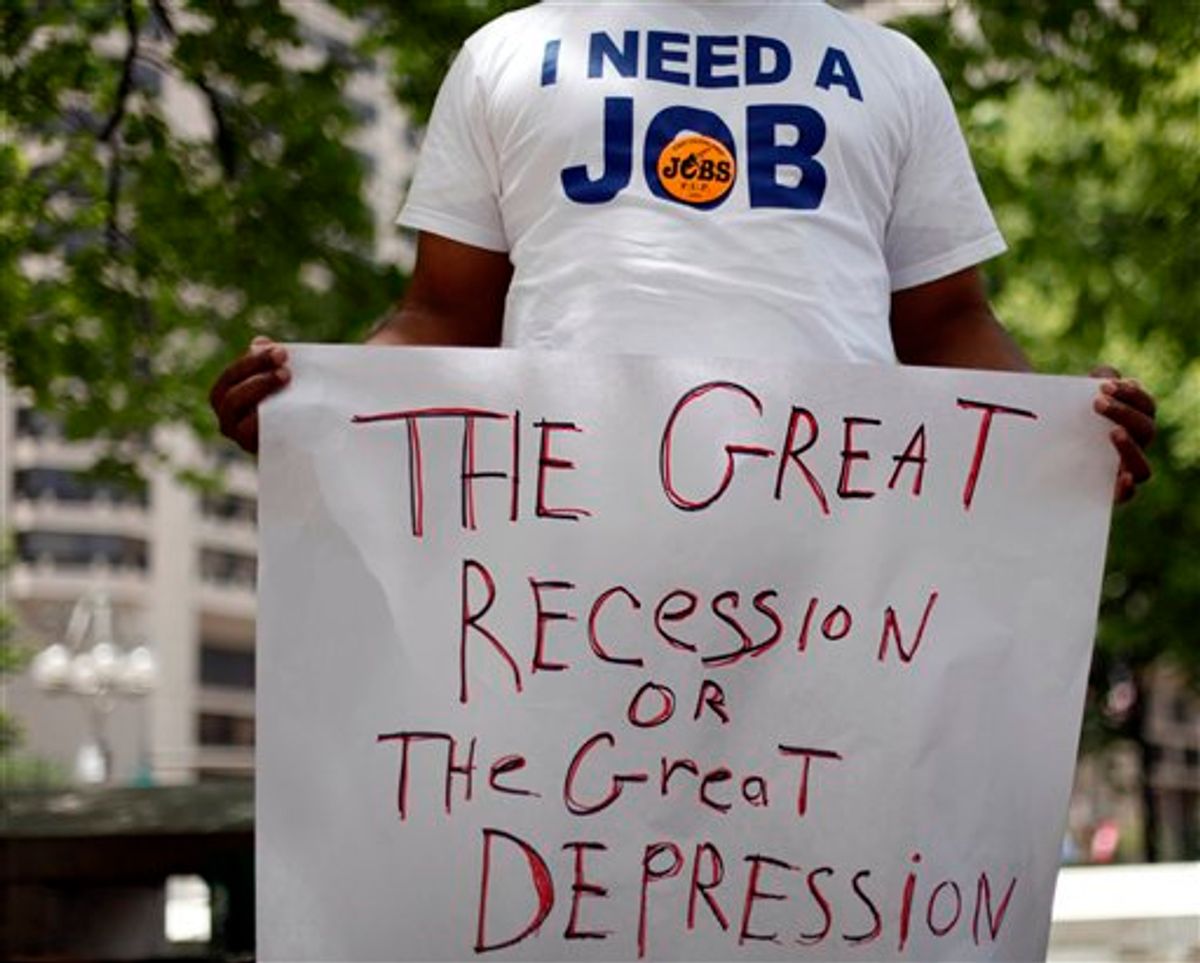 FILE - In this file photograph taken June 23, 2010, Frank Wallace who has been unemployed since May of 2009, displays his frustration during a rally organized by the Philadelphia Unemployment Project, in Philadelphia. The Federal Reserve is powerless to lift the economy out of its slow-growth rut and Congress won't pass new stimulus programs with an election looming. Shoppers are reluctant to spend, and businesses are slow to hire. (AP Photo/Matt Rourke, file) (AP)
--

First impression of the August non-farm labor report from the government's Bureau of Labor Statistics: It's not as bad as it could be. The top-line stats are unpleasant: Payroll employment dropped by 54,000 in August and the unemployment rate rose from 9.5 percent to 9.6 percent. But the drop is more than accounted for by the removal of 114,000 Census workers from the rolls. Private-sector employment, according to the government, rose by 67,000.

The private-sector numbers are mildly encouraging -- if that trend continues, September's numbers should show positive overall payroll growth. But in the meantime, someone at the BLS is taking extra-special pains to encourage us not to get too agitated.

Nonfarm payroll employment changed little (-54,000) in August, and the unemployment rate was about unchanged at 9.6 percent, the U.S. Bureau of Labor Statistics reported today. Government employment fell, as 114,000 temporary workers hired for the decennial census completed their work. Private-sector payroll employment continued to trend up modestly (+67,000).

Of course, another way to say "almost unchanged" in this context is "rose." But I guess that was unpalatable. The pattern is repeated throughout the report. Civilian labor participation rate: "essentially unchanged." Number of people marginally attached to the labor force: "little changed."

But maybe the BLS is right to emphasize how little has changed -- there's not much to take encouragement from in this report, but it also doesn't indicate a sharp deterioration in the labor market. Yes, two indicators that we usually scour for signs of a burgeoning economy -- the number of hours worked per week, and temp hires -- barely budged up at all, but the BLS also made significant positive revisions to the June and July payroll numbers: June went from -221,000 to -175,000; July, from -131,000 to -54,000. So the summer hasn't been quite as bad as we thought it was, especially when one takes into account Census hiring.

That last number has hardly moved at all this year, and that's a case where "almost unchanged" translates as just plain lousy.