Paste magazine: Inside the death of a music indie

The mag folded its print edition Tuesday. For some, it's good riddance to the overly pious. For me, it's heartbreak 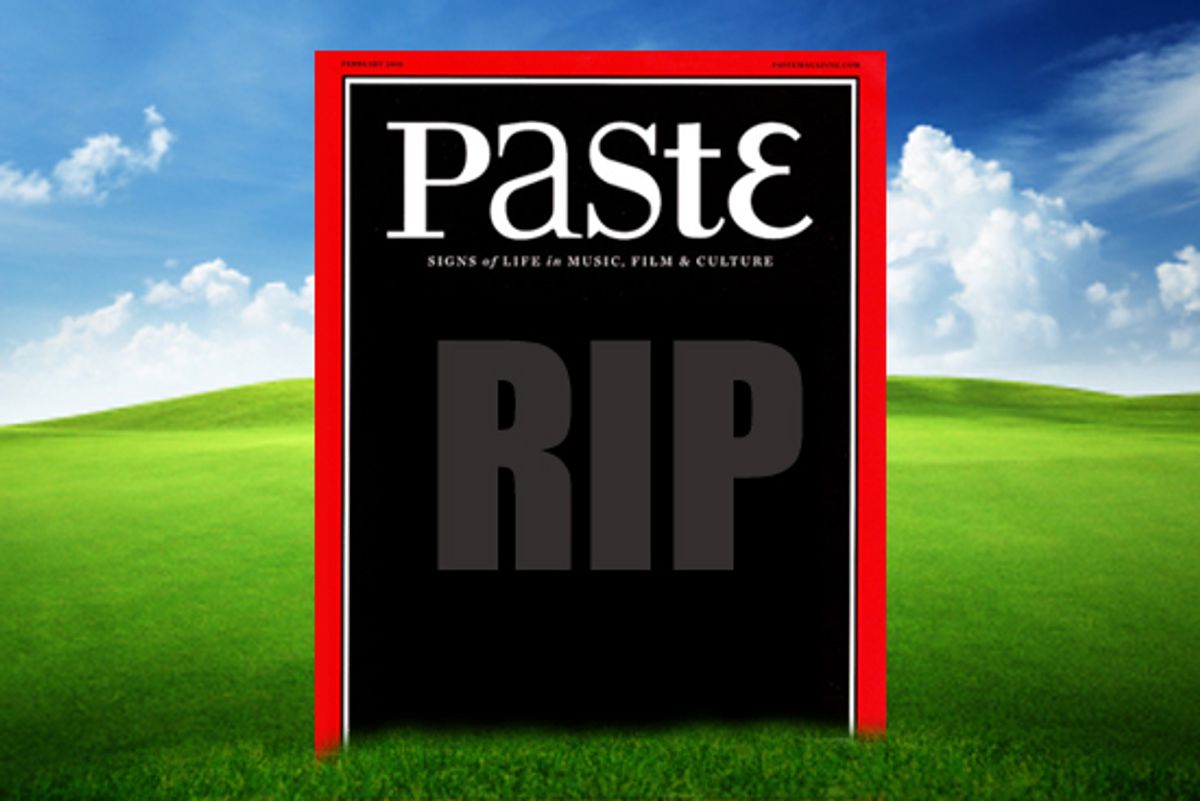 For four years -- beginning Aug. 28, 2006, and ending last Tuesday -- I worked at Paste, the Decatur, Ga.-based music, film and culture magazine that folded its print edition earlier this week. I remember the date of my first day because Paste was then, and still may be, the most exciting and important thing to ever happen to me. (Landing on my feet after being laid off may well be the second.) Two days after I started my editorial internship with the magazine, I entered my senior year of college -- and I really only remember that date because it was such a tremendous bummer to schlep off to class after the meager hours I'd already spent fetching mail, filing CDs and writing news items about Bob Dylan's new tour dates.

It's no surprise, then, that I stuck around until the very last day, moving up from editorial intern to an associate editor. And then, on Tuesday, my bosses -- three guys who built the publication and the company from the ground up -- gathered our dozen-person staff into the conference room, slid the doors shut and said, "We have bad news." And it was bad: The whole staff was furloughed effective immediately; the print magazine was dead; the website would continue, but under uncertain auspices.

I've cried over lesser things at work and in life, but for some reason, just after the announcement, I found myself having to stifle a laugh. Minutes later, seemingly in a burst of hysteric dyspepsia, someone in the room burped loudly. Then I laughed. And then I cried.

Among the many odd reputations Paste garnered over its eight-year run was one of immense self-seriousness. A word sometimes used to describe the magazine was "po-faced," which, as a word, I think is just a funny little thing. I've spent an unusual amount of time parked in front of a mirror, trying to work out what my "po-face" would be, mugging various takes on "humorless and disapproving" and "hypocritically pious," but I haven't quite mastered it. Regardless, relatively few people were lucky enough to know how deeply good-humored, if not outright hilarious, everyone on staff at Paste really was. Passionate, too ("to a fault," our spouses and girlfriends and boyfriends and parents and friends and pets would say) -- but that was more obvious. We were all underpaid, all overworked and all stupidly in love with putting out a magazine every month.

We knew all the things people said about Paste, all of the wonderful things and all the bizarrely contradictory criticisms. Somehow, we were both fingers-on-the-pulse and totally out of touch, accused of being too focused on "the next big thing" and of being late to every party that mattered. We covered too much film, or not enough. The name "Paste" set us up for plenty of jokes about the allegedly preferred skin color of our staff, readers and artists, but when we began a concerted effort to broaden our coverage of hip-hop a few years ago (to reflect more closely the actual interests of our staff, and of many readers) some smirked at what they saw as a lame attempt to be something we weren't and others took it as an all-out affront to their taste. In a fantastic triumvirate of garbled criticism, we were frequently heralded as an alternative to the popular hip-mongering website Pitchfork, but we were also accused of trying too hard to be like Pitchfork, and elsewhere lambasted for trying too hard not to be like Pitchfork. We were seen as too "indie," or not "indie" enough -- and I only further complicated the matter earlier this year when, with the encouragement of my co-editors, I wrote an 8,000-word cover essay that asked (and answered) the question, "Is indie dead?" I was proud of it; I think we all were. But, of course, it was incredibly inane, or incredibly brave, depending whom else you asked.

Then there was the strange matter of us possibly being some sort of crypto-Christian magazine. As one of the several not-all-that-religious members of the staff, I found the lingering rumor that we were sneakily thrusting our Christian agenda on an unsuspecting public via Decemberists and Arcade Fire reviews to be more than a little dismaying. A number of staffers, including some of our founders, are Christian and never sought to obscure that fact, and we were never skittish about the nature of faith in our coverage, but we were a Christian magazine about as much as Rolling Stone was ever a satanist magazine for its coverage of all that devil-worshipin' rock 'n' roll. In reality, the staff's personal beliefs were never an issue of professional relevance. But if they had been, I get the feeling that would have pushed us even further into the fringes.

It should've been easy to ignore all of these wildly varying takes on Paste's worth, not just because so many effectively canceled each other out but also because I had my own sense of what we were doing and felt it was good. It was the hardest in the summer of 2009, during the fundraising campaign that our founders launched to pull us out of an abyss of debt, when every wonderful thing and every horrible thing that anyone could possibly say about the magazine was dredged up and slopped around all over. Our future was secured (temporarily, at least) by thousands of incredibly generous readers, friends and family, but more than ever it became clear that there were many folks out there who'd prefer if we were just left to rot. They'd glimpsed a future without Paste and they liked the view, but I glimpsed the future and I was totally petrified.

I tried my best to shrug it off and just keep on making a magazine. We all tried. We worked against the constraints of time and money and physical human ability; we worked to push our readers and push ourselves; we worked to dig deeper for the best art we could find, search-engine optimization and the hype machine be damned; we worked to prove in some way that print media is important, and relevant, and can and should survive -- and that it can and should survive anywhere, even in Decatur, Ga., hundreds and hundreds of miles from the media empires of the world.

We all tried, and we worked -- right up until last Tuesday.

When the story of Paste's demise hit Gawker, I braced myself for the worst. The threat of the blog and its commenters turning their infamous snark loose on us in our darkest hour seemed like an inevitable second blow. But somehow it hasn't been that bad -- maybe because I've grown tougher in the last year, maybe because people are generally more inclined to be brutally honest with you when you're begging for money and less so when you've just died. (I feel this is probably true for life in general.) The recent vitriol has amounted to little more than the same clashing thoughts I've been trying to wrangle since my earliest days at the magazine, all the things that can't possibly be true all at once but that are lobbed with such force that they seem they must be. But even all that has been peppered in among seemingly endless off-the-cuff tributes from readers, friends, former co-workers, former interns and total strangers, all the people who all along -- even though they weren't in the office every day, pushing that boulder up that hill -- somehow wound up feeling about Paste exactly as I did, and still do: They knew it, and they were crazy for it.

Rachael Maddux is a writer and editor living in Decatur, Ga.