Is Don Draper to blame for the male makeup boom?

Sales of male vanity products -- from concealer to men's breast reductions -- are surging. Thanks a lot, "Mad Men" 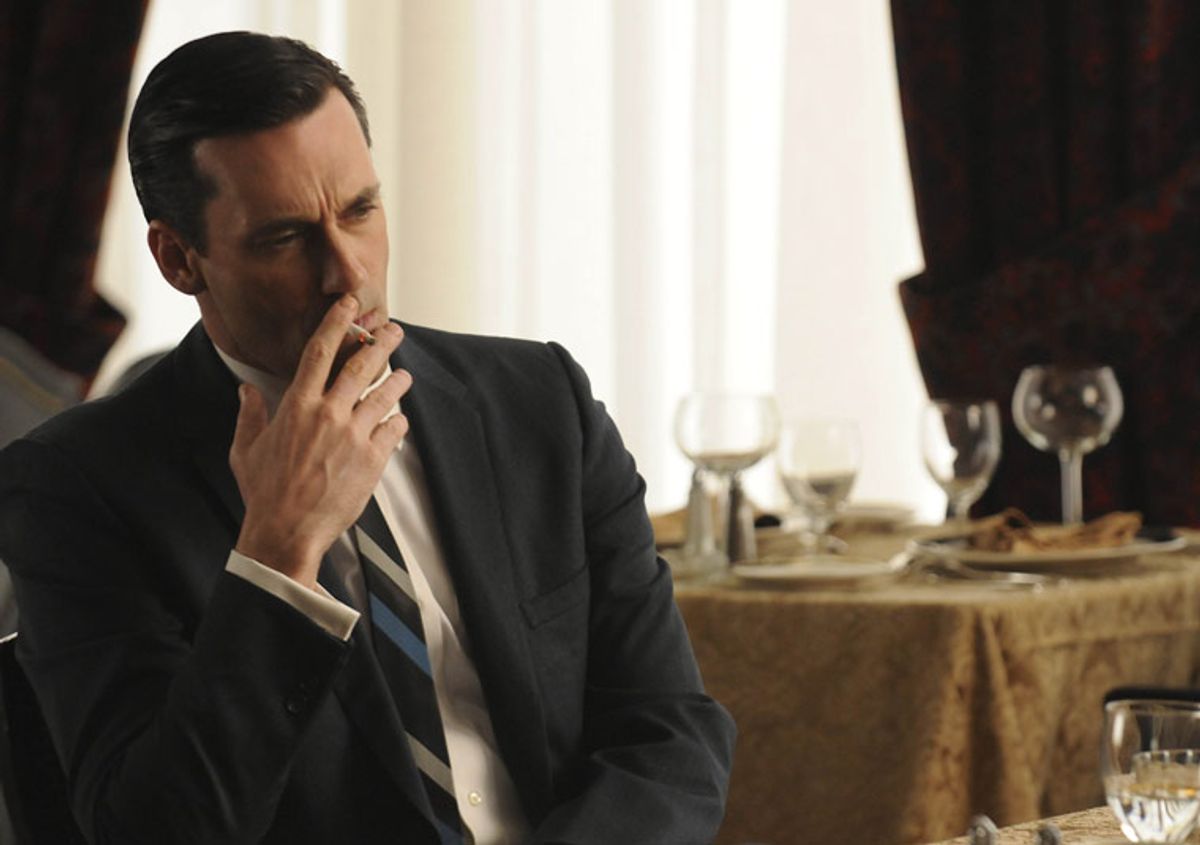 Here’s a confession I’ll probably regret: I recently used my wife’s concealer to cover up the dark circles under my eyes. I was slated to read at a special event, in front of 200 people, and it occurred to me, not for the first time, that these circles made me look really old. In my defense, I didn’t know it was called concealer; I thought it was foundation.

As so often happens when you give in to the tug of your own insecurity, this means I’ve become part of a bona-fide mainstream media trend. According to the New York Times, annual spending on "male grooming products" -- the acceptably heterosexual code words for makeup -- doubled last year, to $4.8 billion. If that weren’t enough to keep Susan Faludi and her grim fraternity of subjects up nights, consider this recent investigative foray from the Times, which blows the lid off the Spanx coverup. It turns out lots of dudes are now wearing dude girdles! But the crème de la crème is a story from the Toronto Sun detailing the astronomical rise in breast reduction surgery for men.

You read that right: Moob jobs are selling like hotcakes. According to one Ontario-based plastic surgeon, "I went from doing one to two a year to last year between 200 and 300 cases. My colleagues are seeing the same thing. It’s one of the most rapidly increasing areas of surgery for men." What in John Wayne’s name is happening?

Honestly, it’s not that complicated. In fact, it’s entirely predictable to anyone who listens to sports talk radio (guilty as charged). Half the ads are focused on male confidence products promising to enlarge your penis, or rip your abs, or grow back your hair. Where major sporting events on TV used to be underwritten almost exclusively by beer and trucks -- and the armed forces -- spots for Viagra and Rogaine are now de rigueur.

Don Draper, meet male vanity. And actually, come to think of it, Don Draper has a lot to do with this. Not because he’s the protagonist of a show about how Madison Avenue built an empire by sowing doubt in the American psyche. Heck, that’s just Capitalism 101. What makes Don Draper relevant to this discussion is that he’s a quintessential, if outdated, example of the new stylized male.

For years, women have been expected to alter their natural appearance to appear younger and more "feminine." This warped standard of feminine pulchritude has filled the coffers of companies producing everything from hair removal creams to diet sodas. A woman who sought to stylize her physical appearance was merely following cultural orders. For better or worse, the same thing can now be said of men. A decade after "Queer Eye for the Straight Guy" introduced straights to terms such manscaping, we think nothing of a show such as "Jersey Shore," in which the resident Lotharios spend as much time primping and posing in front of a mirror as their pneumatic housemates. Dandyism is the new macho.

There’s nothing new about men gussying themselves up, of course. Cary Grant didn’t wake up with his hair in that exquisite comb-back, any more than Don Draper. And he wore loads of makeup. Of course, Cary Grant was a movie star. He was allowed, even required, to indulge in such behavior. What’s changed is the cultural permission to primp that non-famous men are now granted. Metrosexuality may still be a term of derision in some quarters, but its emphasis on male vanity has infiltrated mass culture, and become a tremendous profit source.

At the same time, as Faludi and others have noted, over the past few decades men have lost a sense of economic authority. The ascent of technology has eroded traditional markers of masculinity. Most men no longer perform physical labor. Nor are they sole breadwinners. They sit in front of computer screens for eight hours, then hit the gym and the tanning salon. Then they moisturize.

It’s certainly possible to regard the rise of man girdles and makeup as a kind of progress. At least we care enough to accessorize, right? But it strikes me as another depressing reminder that Americans view physical beauty as the path to self-worth, and cultural success. Women have long felt that they have to look good to get laid and get paid. Now it’s the boys’ turn. We’ve come a long way, maybe.