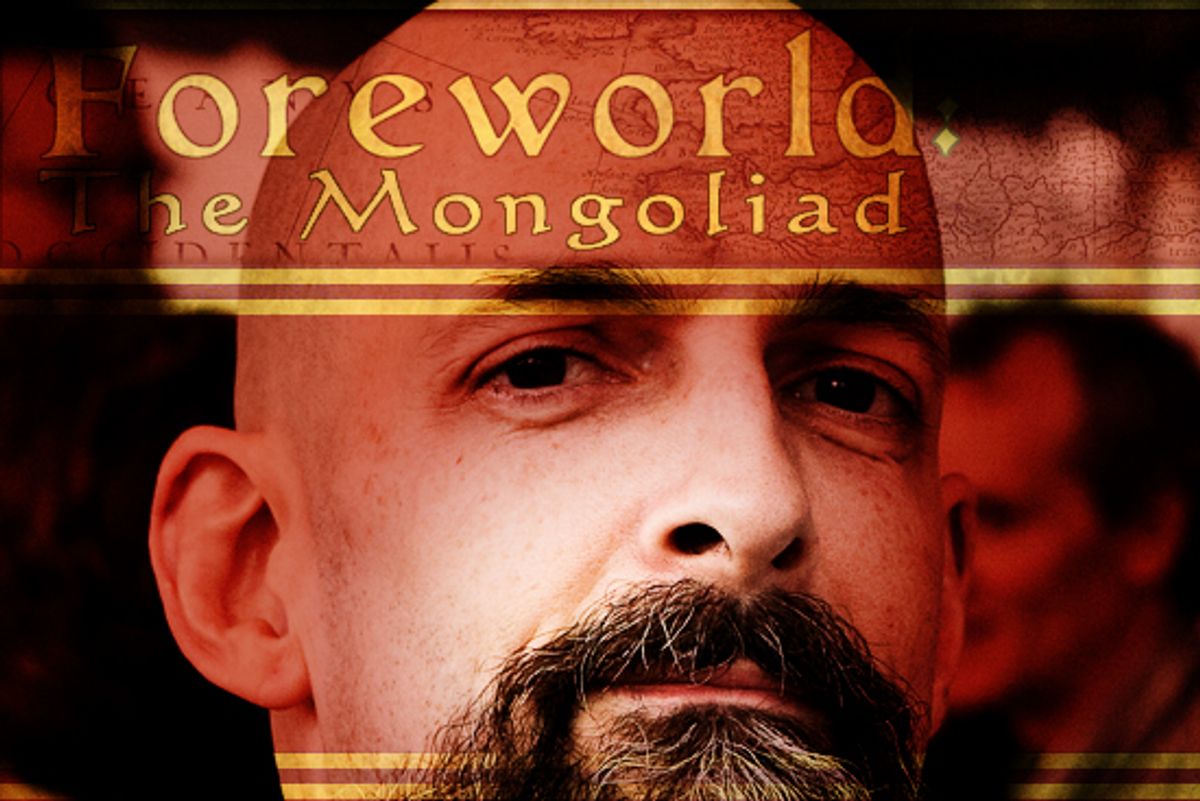 Behold the power of branding! Chapter I of "The Mongoliad" launched online this week, and I plunked down $9.99 for a year's subscription, sight unseen, simply because Neal Stephenson's name was attached. It was an easy call. I've been a huge fan of Stephenson since the publication of "Zodiac: An Eco-Thriller" all the way back in 1988. As the years have passed, I've only become more impressed by the ambition that seeps out of every pore of his work, particularly his most recent novels, "Anathem" and the 3,000-page, three-volume, "The Baroque Cycle." Ten dollars for a new chapter every week of Stephensonian content? Cheap!

But after spending some time with the site and reading the first chapter, it is not exactly clear to me exactly how much Stephenson is baked into this project. He is the co-founder and chairman of Subutai, the start-up that is producing "The Mongoliad." But the content-creation is a group effort. This serial digital novel is being produced online by a team of writers , artists, hackers and sword-fighting geeks -- another big name involved is Greg Bear, also a veteran science fiction author. So who is doing what? Chapter I has no byline, and the writing feels a little rough and unpolished. I'm not sure whom to blame, or praise.

"The Mongoliad" is supposed to be more than "just" a book. Eventually the intention is to incorporate multimedia offerings, along with the hypertext-branching contributions of a user community extending far beyond the core team. Maybe the best way to think about it is an open source project with a strong guiding hand -- Neal Stephenson as Linus Torvalds, perhaps. But how much of the actual coding is he doing? I don't know.

The premise is not without seduction. The time is the 13th century, in a world very similar to our own but not quite the same. Mongol hordes are threatening to sweep across Europe. Can they be stopped? In the initial chapter we meet a mysterious order of sword-fighting monks, a kind of Western Shao-Lin analog whose members prefer broadswords to bare hands. They're the good guys. (The Mongols, so far, seem clearly bad.) There's also a feisty female spy of indeterminate origin who speaks Tocharian (reason enough for me to pay close attention!). And there are intriguing hints of a mysterious plotline involving nefarious forces (including the Catholic Church) that have been in motion for centuries.

It is precisely in the suggestion that there's something bigger than we can readily imagine shaping events that Stephenson's influence feels most evident -- there's an echo of "Anathem" here, as well as the narrative thread that links together "Cryptonomicon" and "The Baroque Trilogy." Or maybe that's just my imagination -- what I want to believe. The other element that might ring true for Stephenson fans is the overt intention to devote a great deal of meticulous detailed description to the mechanics and strategy of swordplay. An introductory note to "The Mongoliad" reports that the whole project grew out of the brainstorming of a bunch of friends in Seattle who liked to get together and revive ancient European sword-fighting techniques. That's a very special geekiness: Renaissance Faire meets hardcore computer programmer meets engineer meets science fiction and fantasy writer. No surprise there, though, Stephenson has always been computer geekdom's greatest writer.

The whole thing has a comfortable Saturday Afternoon Movie swords-and-heroes feel to it. I could imagine picking up "The Mongoliad" as a used, thumb-worn paperback, and spending some enjoyable hours leafing through the pages while sipping a beer in the hammock. On my laptop at my office desk -- not so much. More than just about any content I've ever consumed online, "The Mongoliad" cries out for a more reader-friendly media consumption device. Could this be the killer app that convinces me to get an iPad?

As far as external bells and whistles are concerned, so far, the closet is pretty bare. There are a couple of illustrations, a very stripped-down glossary, and the forums are mostly full of people saying, wow, this is neat, good luck! I'm looking forward to seeing how it all develops, but frankly, I don't think I really care whether cool multimedia games and video spin off of the main narrative trunk, or a thriving community of readers generates its own gobs of affiliated content. I am a fan of Neal Stephenson because of his singular vision and voice, and not least, his ability to tell a fabulous story. "The Mongoliad" will live or die, for me, on whether the story proves so compelling that, like the American Dickens fans who gathered at harbor's edge waiting for the latest installment of the great writer's serialized novels to make it across the Atlantic, I find myself incessantly refreshing my browser, week after week, hoping for the newest dose.

How The World Works Science Fiction And Fantasy