A tale of interface design, monopoly control in the spa world, and lots and lots of bubbles 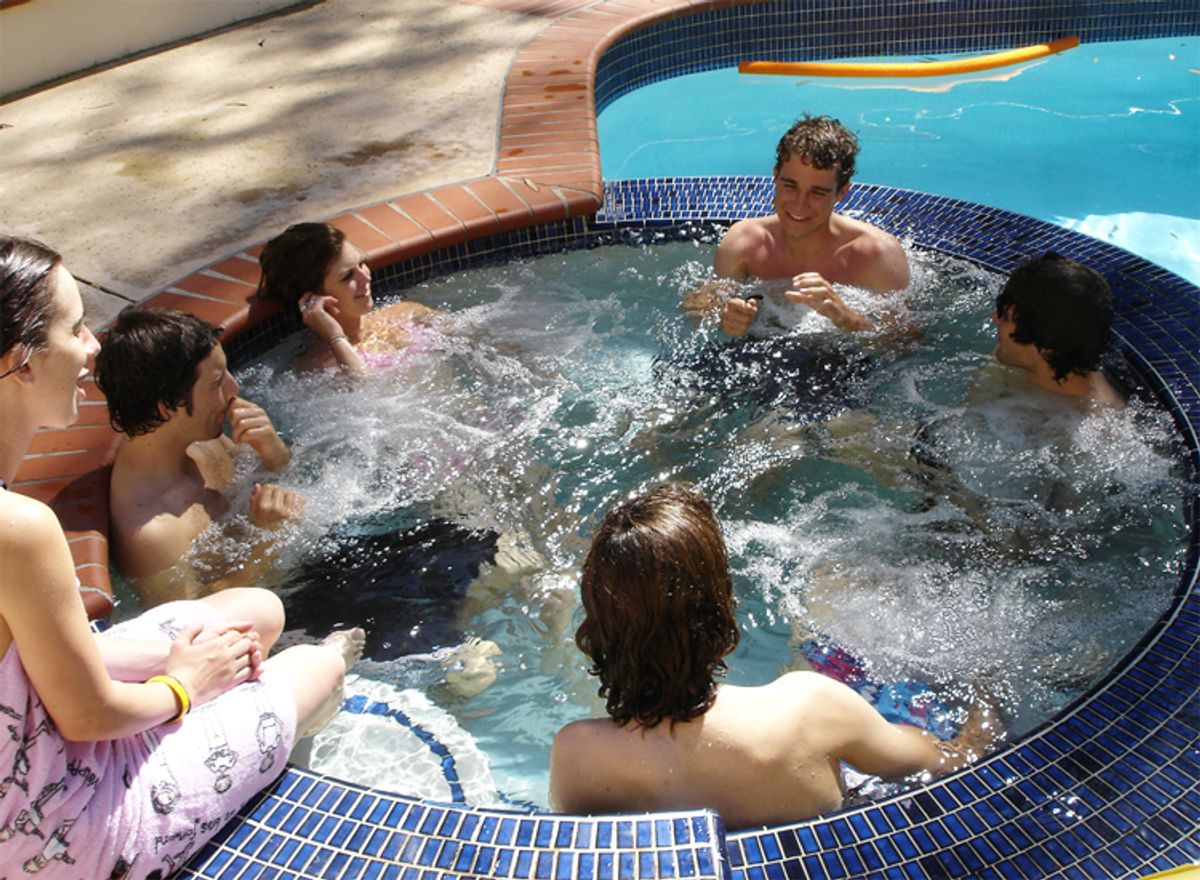 Have you ever stared blankly at the control panel of a hot tub, baffled by even the simplest of tasks -- such as how to turn on the jets, or adjust the temperature, or even just turn the damn thing off? Perhaps you blamed your inability to comprehend on your state of impairment -- a not uncommon malady unfortunately associated with hot tubs.

I sure didn't (and believe me, I have been baffled by many a hot tub), and as my readers know, I'll blame monopoly control and out-of-control intellectual property laws for almost any sin, at the drop of, uh, a bathing suit.

But Jamie Love's IP-Health Digest alert, which normally concentrates on news from the pharmaceutical sector, dug up a tantalizing snippet of a lawsuit filed by a Californian manufacturer of hot tub electronic control systems claiming that another California company -- the apparent Microsoft of the hot tub world -- was restricting competition via aggressive litigation. Hot tubs and patent infringment? That's got Labor Day weekend written all over it. I had to know more.

According to the complaint filed by Newport Controls against Balboa Instruments Inc, there have never been all that many suppliers of control systems to the companies that assemble hot tubs in the United States -- referred to in the complaint as "original equipment manufacturers, or OEMS.

Historically, the options for Electronic Control Systems options have been limited because of the small number of Controller Suppliers and their relative lack of technical sophistication. Hot Tub OEMs and consumers alike therefore had limited choices and, for example, had to accept displays with cryptic messages requiring the use of an instructional manual for even basic operations.

You see! It wasn't your fault! And how crazy is that? How are you going to hold an instructional manual without spilling your champagne?

Recognizing this need, Rogerson Aircraft Corporation, a highly successful aeronautics industry supplier of flight instrumentation and control systems has spent nearly three years developing a series of revolutionary Electronic Control Systems, based on technology also being developed for avionics use.

Italics mine. Newport Controls is a division of Rogerson. And what, I know you want to know, before you head out for a three-day weekend that I dearly hope is filled to the brim with overflowing hot tubs, constitutes "revolutionary" in the context of hot tub control panels?

Hmm. An infomercial broadcast from my hot tub! Suddenly, I am rethinking my instinctive sympathy for the underdog. Please, someone, anyone, file a patent infringement suit that stops these buzz-killers in their tracks, ASAP!

Which, of course, is exactly what Newport is alleging in their complaint that Balboa is doing. The bulk of the complaint accuses Balboa of violating the Sherman Antitrust Act by using its monopoly (defined by Newport as 70-75 percent of the market for hot tub electronic controls) power to crush Newport's attempt to get a piece of the market. You see, Balboa doesn't just dominatethe electronic control system niche. The private equity company behind Balboa has been gobbling up lots of other hot tub equipment suppliers. If you don't play ball with Balboa on one component, alleges Newport, the company will shut you out on all the others. And if that doesn't work, Balboa will sue you for patent infringment, claims Newport. As a result, complains Newport, the company has been able to make only one sale of its control system product.

I can't tell from the complaint how good Newport's case is, and I've been unable to find any press coverage of this swirling hot tub squabble. And my guess is if I tried to make any phone calls at 4 p.m. on the Friday before Labor Day Weekend to further report this story, I'd find out that everybody involved has already shut down for the day and is headed for the nearest hot tub (or standing, champagne glass in hand, staring dumbly at a cryptic control system trying to figure out how to turn the damn thing on.)

All I care about right now is that nugget of an idea -- that sometimes, the quality of our lives is degraded by unecessary constraints on the flow of ideas. It takes a lot of work to screw up a hot tub -- but obviously, it can be done. It should never have happened. How many hours of human happiness have been sacrificed to bad interface design? How many hot tubs have been too hot or too cold? Fight the power! Let a 1000 hot tub control systems bloom!