When we buried my dog, I found my father

I spent my childhood afraid of my alcoholic dad. But when Ginger passed, I saw a side of him I never knew 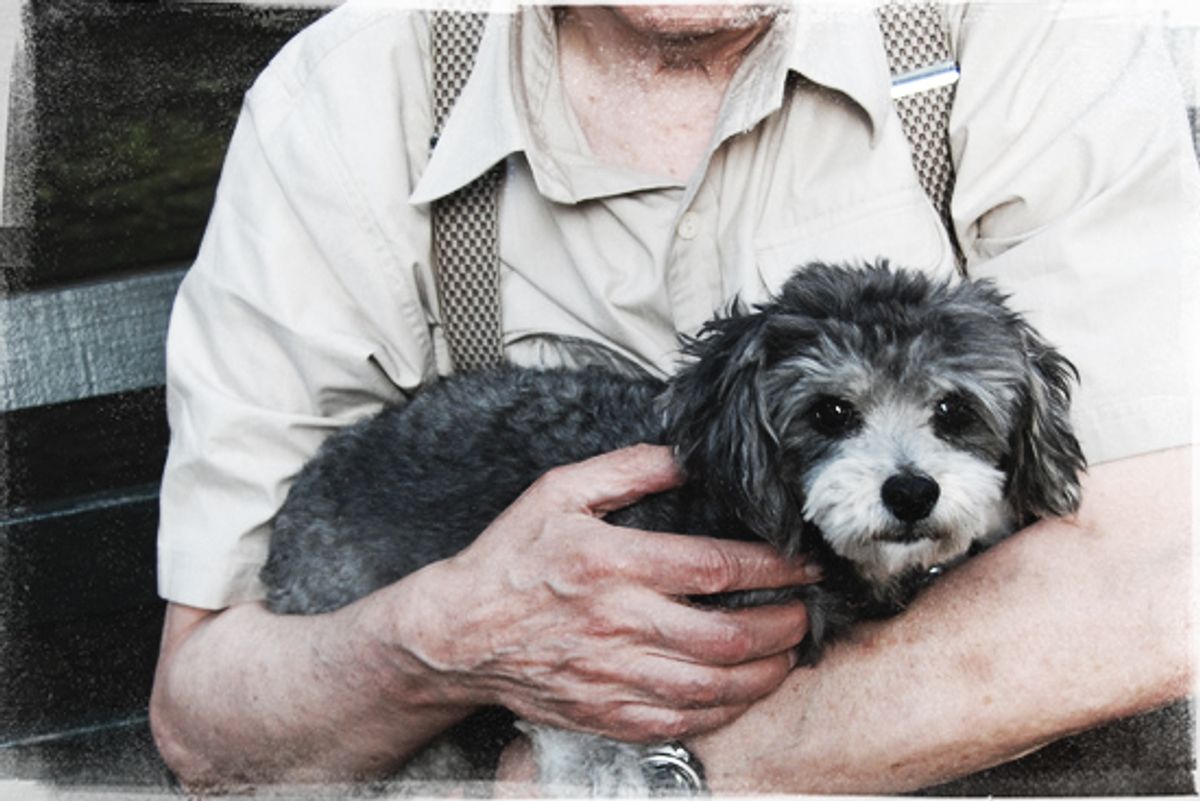 Some parents are gentle in their love. When I was at my friends' houses, one child or another would complain, "We're bored," and without thinking, a mother might suggest various board games, offer to rent a video, recommend we play house or go swimming. If anyone mistakenly piped up around my father, he'd say, "Aw, go play in the street," kick up his recliner, and dismiss us with a wave of his hand.

Once, when he was feeling particularly energetic, he offered something more specific. "You could play tiddlywinks."

"Ooh! How do you play?" I asked, delighted not to be sent into traffic.

"Well, you put your hand out, see?" He grabbed my hand, palm down, spread my fingers wide. "Then someone takes a switchblade, and goes here, here, here." He mimed stabbing at the space between my fingers. "And then you go faster and faster until, whoops!" He pantomimed lopping my pinky finger off, laughing quite maniacally as I swiped my hand back.

Eventually I learned not to play with Daddy.

He could be warm and funny when he felt like it. He could explode with rage when stewed in the right combination of Milwaukee's Best and whiskey. Over time, I learned to leave him to his territory, the living room recliner and the television. He owned time as well. There was a 60-second interval every weeknight at 7:30 that was his possession, generously leased to the Ohio Pick 3 Lottery.

"Be quiet, dammit!" he'd shout to all of us at 7:29, even if no one was speaking. The dog might be panting or my cat might linger too long, tail waving listlessly in front of the screen. "Out of the way, Jesus H. Christ!" The dog would balk, but the cat could still glare with dignity down her sharp feline nose.

As the Lotto jingle signaled the beginning of the drawing, he'd frantically shush us. The woman who called the drawing nightly welcomed viewers: "Good evening. This is the Ohio Lottery!" She had enthusiasm, gave the ritual a bit of flair.

"Damned bitch!" he'd yell, after the digits were called.

Almost without exception, he claimed to be one number off, a single number away from a win. Perhaps there was a conspiracy, weighted balls set to ensure the fewest winners. My father had figured the numbers -- a system worked out on a tick-tack-toe board with digits drawn the night prior, and then numbers from other nights of the same date years ago. He had stacks of worn lottery booklets covered in tables itemizing the history of the Ohio Lottery. It was like a Poor Richard's Almanac designed to guarantee indigence.

But on occasion he'd win. Most often the reward was $41.50. It took me until adolescence to realize that sum was likely sunk back into the Ohio Lottery within a few days. Once he won a few hundred dollars and came home like new nobility. He called me to him, "You see this?" It was a one-hundred-dollar bill. "Just look at this. You'll probably never see another one of these."

Things fell apart in our house. Walls cracked as the foundation sunk, water stains grew on ceilings as leaks accumulated from above. None of these material changes could capture his attention like this 7:30 observance.

Like so many other things, our dog began to deteriorate. She was 19 years old, and her hind legs could no longer maintain the weight of her body. My mother would carry her up and down the front stairs of the house and set her down in the yard in lieu of a walk. Sometimes she couldn't hold her bowels until being toted outside.

"The damned dog messed herself again," my father would bark, louder than the old pup herself could manage. It was obviously my mother's task to deal with cleanup.

Finally, I begged my mother to take the dog to the vet. We couldn't afford the regular veterinarian, but the ASPCA would help you out if you were low-income. After a few hours, my parents returned home. I was a teenager, and had likely spent the intervening time listening to music and writing bad poetry.

"Where's Ginger?" I asked, proving with my innocence that I was still very much a child.

My mother took a deep breath, "Honey, they had to put her to sleep." Mom had grown up on a farm. She understood the cycle of things. She said it gently to me, patting my arm.

I was inconsolable. Furious. "You let them kill her! I didn't even get to say goodbye!" I was sobbing. Crossing my arms over my knees, I cried into my sleeve.

"We loved that dog, you know that." I heard a broken, choked voice I didn't recognize coming out of my father. Opening my eyes and looking up, I saw him standing in front of me, now between me and my mother, tears rolling in streams down his face.

I'd never seen my father cry. I had imagined he was impervious to tender emotion.

"We didn't want this to happen, she was just so sick." His voice cracked. I stared at him as though I'd just discovered a new species of man. "I'm so sorry." He put an arm around me. I couldn't remember his hugging me before in my life. He patted my back and hiccupped a little. Entirely confounded, I cried harder. My dog was dead -- and something very strange had overtaken my father.

Years passed, and the hostile, more malicious form of my father receded a bit. In my early 20s, he sobered up. There was no finding God, or AA meetings. He simply came very close to drinking himself to death and determined he'd rather go for the alternative.

But the expressive, remorseful man I saw the day our dog died also never reemerged. I wasn't sure what to do with my new, sober father. He shared tics with the previous drunken version. He still had an impossibly short fuse, still went to the bar every afternoon (now had ginger ale), still figured his numbers on neat half-sheets of paper and, most nights, swore savagely at 7:30.

Sometime during his first year of sobriety, my mother called me at college. My 17-year-old cat, Princess, was dying. If I wanted to see her again before she moved on, I should come home.

Packed into my boyfriend's hatchback and cruising home, I couldn't help marveling at how long my cat had held out. She'd only been a kitten the first time I'd considered running away from home (I'd stayed because she wouldn't let me close her in the suitcase). It struck me then as strange, just how long animals lived when tended to by my family.

When I got home, Princess was underneath my bed. I lifted the edge of the comforter and saw her peering at me from the darkness. Her green eyes glowed a bit. I called, but it seemed she couldn't move. I reached, and eventually got two hands around her matted, skeletal frame.

She had withered. Her pink tongue hung forgotten between her jaws. All over her body, fur was mashed and wadded with feline dandruff. Scabs dotted her exposed skin. Across her face, a mass of cobwebs and dried mucus netted from her ears to her nose.

She was a pathetic, broken animal. I had gotten her at an age when all a little girl wants is to be a princess, to be cared for like a princess. I'd had tea parties with her. Watched her nurse kittens. Carted her around the house under my arm through most of my childhood. Once I reached my teenage years, I'd somewhat forgotten her. Boys were far more exciting than a cat. Then, when I'd had the opportunity to move out and go to school, I'd done so with no thought for my aging pet.

I carried her out to the kitchen, looking for something to clean her face. I wet a paper towel and gently began mopping back the dried muck around her eyes. It wouldn't budge. Kneeling beside her, I was gripped with remorse. I had neglected her by leaving her here. For the second time in my life, I sat down on the floor of my parents' house to cry over the death of an animal, preparing for the end.

"You'll never get it like that," my father said. He'd been watching me tend to Princess. Her breathing was shallow. "Here." With uncharacteristically deft movements, my father grabbed a dishrag off a nearby counter. With one hand he pinned the cat to the floor, and with the other, vigorously rubbed at her skull. He went at it the way I'd occasionally seen my mother Brillo pad the stovetop.

"Dad! Stop!" I cried, but he kept it up. The rag entirely covered Princess' face. I was certain he was suffocating her.

"There," he said, and he let her go. "Better just to get it all over and done with, then let her be." The cat collapsed, her neck a valley between her shoulders. With eyes now free of debris, she blinked up at my father. She looked somewhat violated, but her dim eyes also appeared a little thankful.

I looked up at my dad. I'd been raised by that man's rough, unyielding hand. When I'd sometimes needed gentleness, I had more often gotten belligerence, or shouted orders to be silent. But I'd been cared for in the only way he knew.

My eyes veered down to my shrunken, half-dead cat. She'd kept me here. When I was small and scared of my father, she'd comforted me. She had been my companion and had taught me how to care for another living thing. I ran a hand over her scab-crusted coat, her now clean face.

Princess flattened herself to the ground, allowing her chin to rest on the linoleum. As I whispered variations on, "It's OK, little kitty," I felt my father lean down and kiss me on the top of the head as he left the room.