This week in crazy: Jan Brewer

The Arizona governor spins wild tales of lawless Arizona, runs away when asked to explain references to beheadings 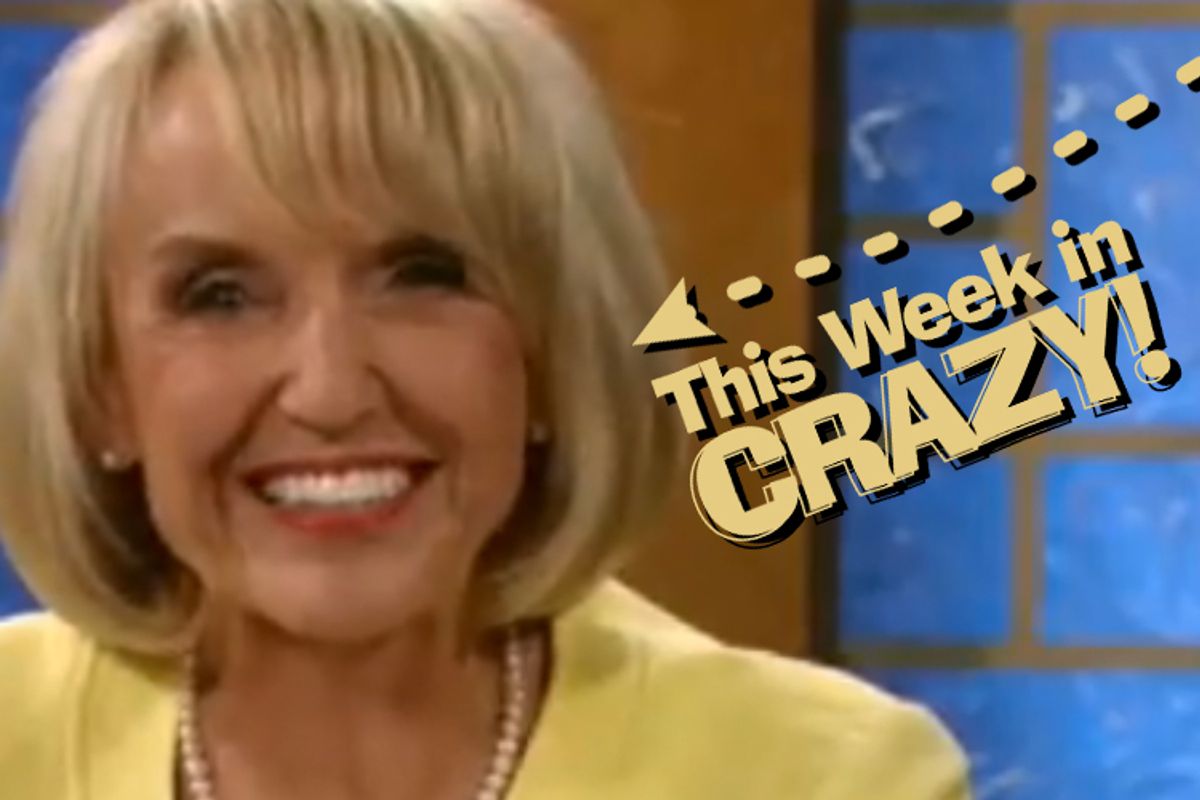 Arizona Gov. Jan Brewer will not participate in a second debate with her Democratic opponents. Which is sad, because that first debate was wonderful television. When Brewer was actually able to form sentences, they were full of nonsense.

Brewer's debate performance has been charitably described as "painfully awful." Her opening statement is a thing of beauty:

But things actually got even worse after the debate, when a gaggle of reporters asked Brewer to explain something she refused to respond to in the debate: why she claimed, falsely, that illegal immigrants were beheading people in Arizona, and leaving the bodies in the desert.

It is one of the most inept and artless attempts at dodging a question that we have ever witnessed:

Why so much beheading talk, exactly? Well, as part of her sales pitch for Arizona's oppressive anti-immigration bill, Brewer had to convince people that immigrants were really, really hurting Arizona. And so she began to spin a fantastical tale of Arizona as a war-torn battleground.

Brewer's Arizona, as described in national television appearances with friendly Fox hosts, is an ultraviolent, post-apocalyptic Road Warrior hellscape, with bloody human heads littering the unforgiving desert and drug cartels kidnapping thousands of Phoenix-area children to act as mules. She told Fox News viewers just how bad things had gotten, with "the crime, the drugs, the kidnapping, the extortion, beheadings, and the fact that people can't feel safe in their communities."

(So ... visit beautiful Arizona! Hold your next event here, while dodging gunfire from the Mexican criminals.)

Asked in June, on local TV, to explain which beheadings she was referring to, Brewer made her now-famous claim:

"Our law enforcement agencies have found bodies in the desert, either buried or just lying out there, that have been beheaded."

None of that, of course, is at all true. But it is very crazy.

On Friday, Brewer finally came up with something resembling an explanation:

"All you guys were doing and talking were beheadings, beheadings, beheadings," the governor said. "That is something that has stuck with you all for so long, and I just felt we needed to move on."
[...]
Brewer insisted later that she has been misquoted. "I never said 'Arizona,' and it's unfortunate that it was construed as 'Arizona.' "

Brewer actually demonstrated some degree of sense when she announced that she will not participate in any more debates, and "said the only reason she debated him on Wednesday is she had to to qualify for more than $1.7 million in public funds for her campaign."

(And we have not even mentioned the time when Jan Brewer said, "My father died fighting the Nazi regime in Germany," even though he died, of lung cancer, in 1955, and never served overseas.)

Barack Obama is partly to blame for all this crazy. He selected former Arizona Gov. Janet Napolitano to be his Homeland Security secretary, despite her not being uniquely qualified for the position, and then-Secretary of State Brewer was next in line. Since then she's proudly signed every nutty thing the Legislature put on her desk. Brewer never would've won a gubernatorial election without being able to run as the woman who signed Arizona SB 1070. Because, as you can see, she's crazy.