The most important race you don't know about -- yet 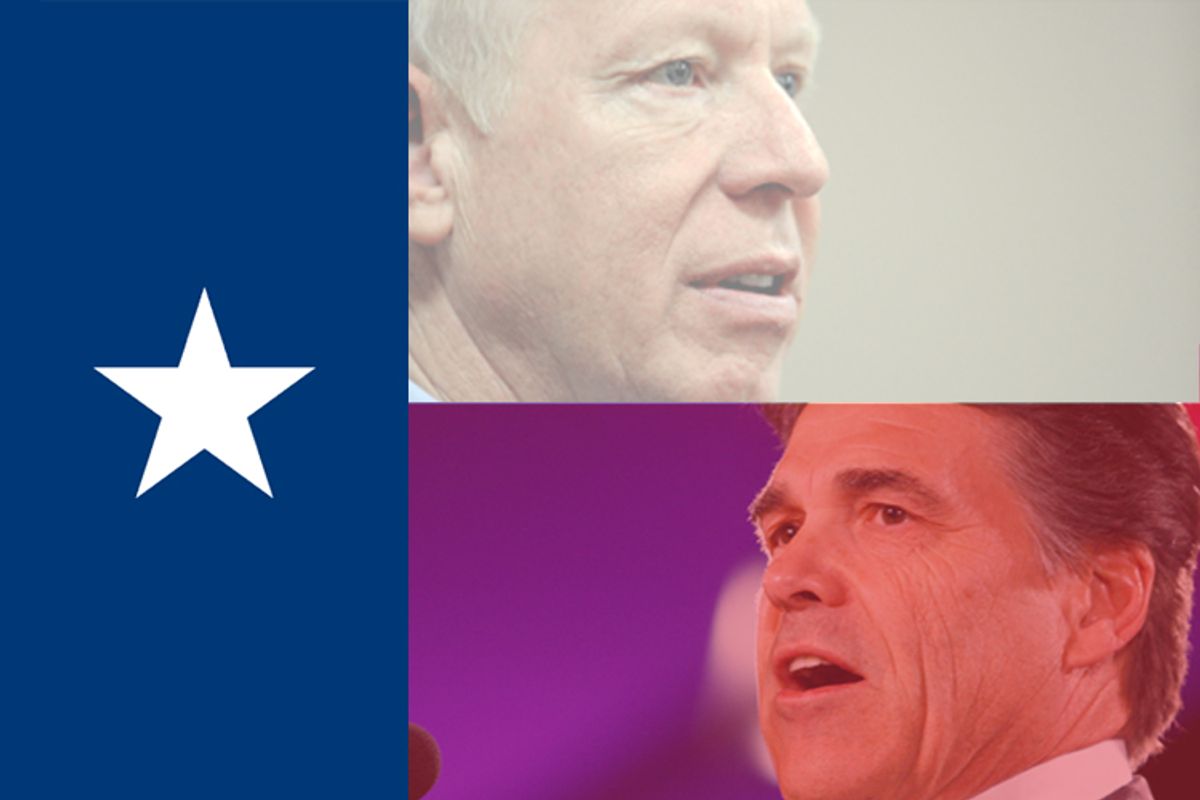 With the fight over Congress intensifying and President Obama’s agenda hanging in the balance, coverage of this fall's governor’s races has largely fallen by the wayside. But the outcomes of some of these races will have significant consequences -- none more so than the contest in Texas, between Republican incumbent Rick Perry and Democrat Bill White, the former mayor of Houston.

Texas, where Democrats have been struggling for years to wage competitive campaigns, may seem like an unlikely battleground, especially in the climate of 2010. Today, not a single one of its statewide offices is occupied by a Democrat, and Democrats haven't won a U.S. Senate seat or the governorship in the last 20 years. The party's institutional failures have been all too apparent as its candidates have endured repeated embarrassing beatings in races initially seen as winnable.

Rick Perry exemplifies Democrats’ frustrations in Texas. Ascending to the governorship in 2000 (when George W. Bush left to become president), Perry has proven resilient despite some shaky poll numbers. Cultivating an image of something of a Texas Marlboro Man -- a label fashioned by Newsweek -- Perry’s hissing rhetoric against Democrats, his happy rejection of federal stimulus money, and his musings that Texas could secede have made him a conservative darling while earning him the enmity of liberals and many moderates.

Perry’s past successes -- he won reelection in 2002 and 2006 -- point to both his canniness and his vulnerability. In '06, Perry won with just 39 percent, and in this year’s GOP primary, he dismantled Sen. Kay Bailey Hutchison, who had entered the race as a strong favorite, with withering anti-Washington broadsides. But fending off Hutchison, Perry created new cleavages in the electorate, earning resentment from a conservative business class that had long viewed him with unease. These subtle weaknesses give Democrats, who last won the governorship with Ann Richards in 1990, a real chance with White.

A popular two-term mayor of Texas’ biggest city, White was an energy executive and a top official in Bill Clinton's energy department. White can appeal to many moderates and independents -- swing voters generally alienated by the governor’s confrontational style. White’s background can also potentially connect with the businessmen and -women and country club Republicans who backed Hutchison in the primary.

To be sure, White is an underdog. Regardless of his image among detractors as a cowboy bumpkin, Perry remains a wily campaigner and an excellent retail politician, a sharp contrast  with the charisma-challenged White. And in a terrible year for Democrats, Perry will work assiduously to tether White to Obama, an approach that fits perfectly with his fondness for negative campaigning.

For his part, White must keep the race focused on Perry and state issues. With mediocre approval ratings, Perry is especially vulnerable on education: Texas schools have slumped badly on his watch and Perry has created widespread anger by stacking the state school board with religious conservatives. Perry’s inability to work with the GOP Legislature in many areas gives White an opening to brand him ineffective.

The wild card is immigration. Arizona's controversial new law has brought the issue to the forefront, but surprisingly, it hasn't been a major factor in Texas so far. Perry has refrained from the demagoguery that characterized his immigration posture in the past -- a sudden timidity that suggests the governor is afraid of further infuriating Latinos. Indeed, Latinos have never voted in equal proportion to their size in Texas, making up just 20 percent of 2008 voters while representing nearly 40 percent of the state's population They represent a sleeping giant Perry can ill afford to turn out.

Sporadic polling has given Perry modest leads, but with consistently less than 50 percent support. Perry’s base is West Texas and he will do well in Central and East, while White should be strongest in the cities and Hispanic South Texas. To win, White needs high urban turnout, principally in Austin and Houston, and victory in the suburbs, particularly around Harris and Dallas Counties, where more affluent voters have reservations about Perry (but also where anti-Obama preferences could outweigh their distaste for the Texas Marlboro Man).

The outcome will be critical to state and national Democrats. If White can win, it would revitalize the state party and give Democrats a foothold in the nation's fastest-growing state. A Democratic victory would also offset likely losses this fall in big states like Illinois, Michigan, Pennsylvania and Tennessee and end any national aspirations that Perry might have.

The implications for redistricting, which takes place before the 2012 election, are also significant. Texas is slated to gain three or four new House seats, and while the state's growth can be heavily attributed to Latinos, the Republicans who now run the state can be expected to draw three new GOP-friendly seats. But a Gov. White would change that with his veto power, forcing the GOP into a fairer redraw, one that might weaken the devilish red lines that produced today's ironclad 20-12 Republican delegation.

Most important, though, is what a triumph could signal for Texas Democrats in the next decade. If White can turn out Latinos, it could mean that Texas Democrats are finally crafting the formidable statewide base that they've been dreaming about for years. Victories in subsequent elections for the U.S. Senate and for all of the other statewide offices might suddenly be possible -- especially since Texas' congressional delegation includes several Latinos who could make appealing statewide contenders.

Yes, White is an underdog. But the opportunity for an upset exists -- and if he can pull it off, it will represent a crucial step for Democrats in Texas and across the West. Progressives should follow this one closely.