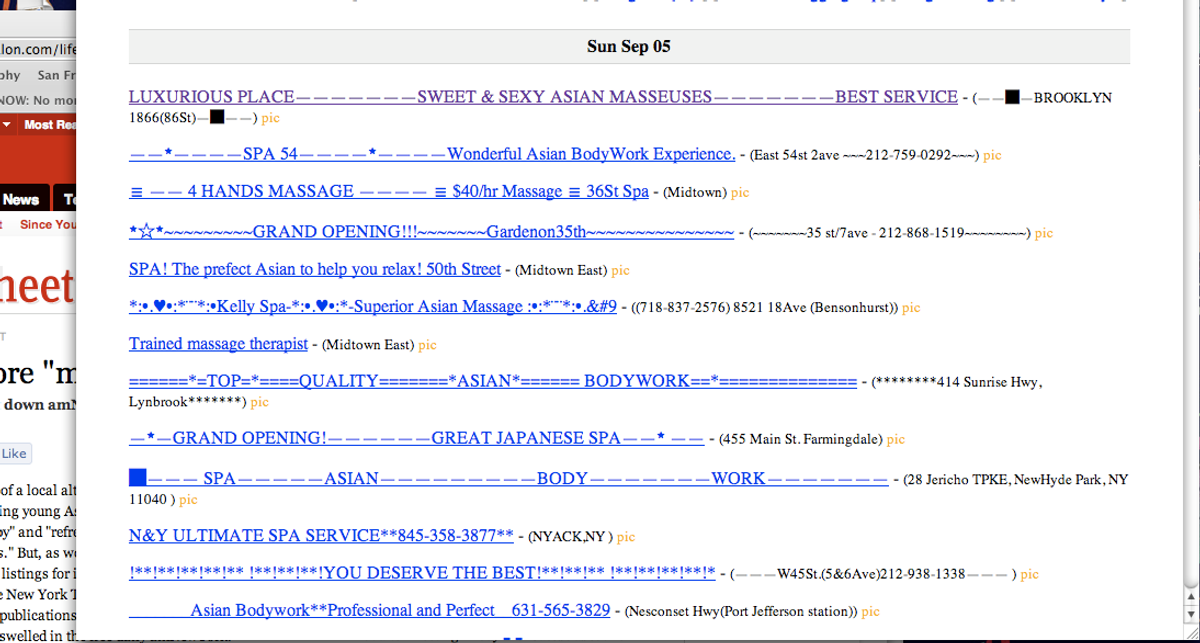 A single question came to mind when I heard that Craigslist had taken down its "adult services" section on Saturday: Where will sex workers turn next? So far, the answer seems to be … Craigslist.

At the start of the Labor Day weekend, the company replaced the front page link to the "adult services" section with a single word: "censored." It's a provocative response to mounting pressure from activists and 17 state attorneys general who argued that the site was enabling pimps and sex traffickers to exploit women and girls -- but it's unclear how much it will change. The "therapeutic services" section already appears to have absorbed a lot of the content you would have previously found in "adult services," although it is much more toned down. There are "full body" rubs, "four-hand massages" and promises of "SWEET & SEXY ASIAN MASSEUSES."

The Associated Press reports that "some ads still carried in Craigslist's personals section look like they could fall in similar territory" and gives one example of a post found in "casual encounters":  "I am the perfect lunchtime or after-5 companion for businessmen that jet-set, work long hours or have family obligations." ABC News similarly found "several ads across a number of regional Craigslist sites that explicitly mention monetary exchange for sexual favors, seek 'fun time$,' offer a massage from an 'attractive independent female' or seek a 'mutually beneficial' meeting."

It seems that the sex workers and pimps who were pushed out of the virtual red light district are now spreading throughout the site. That certainly makes buying and selling sex on Craigslist more difficult, because it isn't so clear what is what. Users will likely flag inappropriate posts, but it remains to be seen how well that will work and whether these spillover ads will be policed in any official capacity. Craigslist staff screened each "adult services" ad, which is why they cost $10 a pop (and $5 to repost). It's unlikely the company will be able to apply the same standards now that sexually oriented ads are proliferating throughout the site.

M. Ryan Calo, a research fellow at the Center for Internet and Society at Stanford Law School, told the AP that this will make it harder to investigate and screen online prostitution: "Instead of being in a small stream, it's going to be in a big ocean." Business is likely to spread not just throughout Craigslist but also to similar sites, of which there are several. Valleywag made that clear in a cheekily servicey article -- headlined "Your Post-Craigslist Guide to Buying Sex Online" -- which included a list of six thriving X-rated online classified sites.

Stopping the sale of sex on the Internet is like trying to keep frogs in a bucket. You can shutter the most popular online venue for prostitution, but that doesn't eliminate the demand. Independent sex workers will find other ways to do business, and so will pimps and traffickers. The question here is whether sex workers, and trafficking victims, will be safer without Craigslist's "adult services" section, or whether they'll just be less visible.