Inside the strange world of "Hoarders"

The addictive reality show is changing views on our possessions. A participant from the show shares her experiences 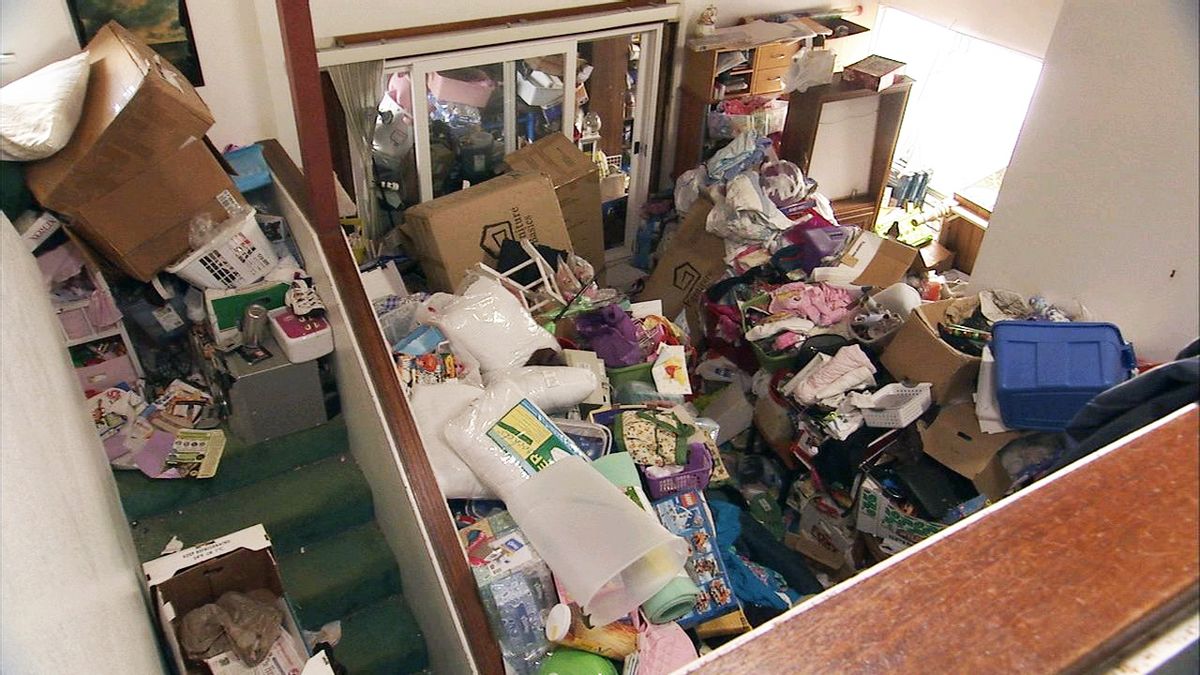 "I think I've always been a collector," said Kim, a pretty Southern blonde in her 30s with an easy laugh. "A collector of memories, of pictures." Kim still bristles at the term "hoarder," although that's the name of the show she appeared on last May, after a friend nominated her for the honor.

Granted, compared with many of the participants on the eminently watchable reality series, which begins its third season tonight on A&E -- a show that has featured such jaw-dropping spectacles as a couple whose house is so cluttered they move themselves and their young children into a tent in the yard and a man whose studio apartment overflows with garbage and excrement in seemingly equal amounts -- Kim is one of the least extreme cases. Kim's clutter is mostly clothing (some with the tags still attached) and paperwork brought home from her job, but it carpeted the floor of her office, joining a colony of soda cans in her living room. Part of the allure of the show is the relationship between the strangeness of hoarding, how absolutely unreasonable and destructive it is, and the familiarity of it.

"Hoarders" also aims to change the behavior of the participants at the center of its show -- "disposophobics" is the clinical term, people whose pathological urge to collect or inability to throw away items is slowly damaging, even destroying, their lives and homes. Like the network's Emmy-winning "Intervention," "Hoarders" isn't merely an exercise in voyeurism but an attempt at turbo-powered rehabilitation; houses are emptied of truckloads of toys and clothes, kitchens are disinfected, and therapists are employed to change lifelong habits in the span of only 48 hours. But in the midst of a recession and a mortgage crisis, "Hoarders" may actually be changing the way the way we think about our own relationship to stuff. At the very least, it's changed how we think about hoarding.

The term "hoarder" once brought to mind a lady on a sofa covered in squirming cats, or tragic characters like the Beales of "Grey Gardens," but compulsive hoarding has now become a recognizable disorder. Over the phone, professional organizer Geralin Thomas, who often appears on "Hoarders," likens this shift to the evolution of our perception of ADHD. "People used to say, 'Just discipline them and they'll sit still,'" she says. "That's not true and we know it." Thomas seems to be an endless well of patience and understanding; other professional organizers who appear on the show have lost their cool while struggling to convince a hoarder to part with, say, an aspirin or a container of spoiled yogurt.

The behavior is as understandable, as human as it is perplexing, and the show makes many of us shudder with recognition: Heather Havrilesky called the experience of watching hoarders-themed shows "creepily cathartic," mentioning how quickly the show's message propelled her to shuttle bags of old stuff to the local Goodwill. On the day I spoke with Kim, my washing machine had broken down in the middle of a cycle and my hall closet was filled with the contents of my hamper that hadn't made it into the wash. I'd had a busy week and hadn't vacuumed up the cat hair, which was accumulating in big fluffy clouds hanging out by the baseboards; I'd made breakfast and the skillet was soaking in the sink, next to a blender which had a gluelike film of strawberry seeds covering its glass and metal innards. I told Kim that the thought of a film crew showing up to examine my sprawling mess gave me the sweaty sensation of someone afraid that her underwear would end up being seen by 2.5 million people.

"I'm a private person and it wasn't my cup of tea, certainly," she said. "It's my single biggest vulnerability."

Kim's decision to be on the show was due in part to the effect her hoarding had on her romantic relationships and her job. Though she dated and had a busy social life ("Literally I'd gotten into a phase where all I wanted to do was not be here" in the house, she said of life before the show), she was too ashamed and embarrassed of the mess to let anyone into her home. She would spend hours trying to clear a corner of one room only to become discouraged by the sheer volume of the mess. "The pride factor isn't there when it's just one tiny area," she said. "It's not the same as having the whole thing done ... it was an amount of work that didn't seem attainable, in my perception."

A striking theme of the show is hopelessness. It's not uncommon for its subjects to express suicidal thoughts, like Gordon, the patriarch of a family of four who appears in Part 2 of this season's premiere and frequently wishes aloud that he would die of a heart attack before the cleanup finishes. Often those who despair the most have been living without plumbing, eating takeout in bed because their kitchens are nonfunctional; some are facing eviction or intervention by either adult or child protective services. It seems the longer the hoarder has been living in a state of chaos, the dimmer the outlook.

With its tales of excess, the show is cannily designed for our consumer age, but "Hoarders" began as an accident: The producers had an idea for a show about flipping houses, and in the process discovered a home that had been inhabited by a hoarder who had since died and willed the house to her sister. It wasn't exactly aspirational programming for the real estate set, but the story of this messy house gripped the producers, and so "Hoarders" was born.

Now a verifiable cult hit, the show also attracts a certain rubbernecking point-and-sneer audience, and it is no surprise that it has elicited quite a bit of online scorn. "What kind of mother in her right mind leaves animal poop all over the floor and doesn't bother to clean it up?" asks one angry (though, it must be said, somewhat reasonable) commenter on the "Hoarders" IMDb page. Viewers wonder how hard it would be to simply buy a vacuum cleaner or set aside a few hours to ply the rotting mangoes from the crisper in the fridge. Still others view the subjects of the show as a sort of patriotic affront, as if the state of a little house in Oklahoma could disgrace our entire nation. The show's hoarders, writes one heckler, "take the great bounty this country has to offer for granted and live like pigs because they're lazy."

But what makes "Hoarders" so fascinating is how its participants defy one dismissive description; there really is no typical hoarder. One of the most remarkable stories "Hoarders" has ever featured comes in Part 2 of the third season premiere: Sir Patrick, whose title comes not as a result of affectation but rather, he explains, courtesy of Prince Charles in recognition of his humanitarian work. Sir Patrick refers to his home as Camelot -- it's filled with silver plates and Oriental screens, dolls and ornate lighting fixtures, relics of a spending habit that threatens to bankrupt him. He describes himself as being "addicted to beauty" because of a difficult upbringing, and as therapist Dr. Suzanne Chabaud gazes around his kitchen at the ornamental statues of waiters, she suggests that they are Sir Patrick's company. He agrees. "How can you say what something is worth when it is so deeply personal?" Chabaud wonders. And how is it possible to discard something that has taken on a Velveteen Rabbit-like life, almost becoming an extension of the self. We all know what it's like to hold on to something long past its expiration date. But where does sentimentality end and hoarding begin?

"A lot of people call me because they wonder if they're hoarders," says Geralin Thomas. But one key distinction is that unlike record collectors, who will happily show you their rare vinyl copy of some obscure band, hoarders feel shame and the urge to hide -- and the show makes them realize they're not alone. Thomas and other organizers have seen an uptick in calls and e-mails from people reaching out for help. "Younger and younger people call and say, 'I think I have a problem shopping.' They give me this little scale comparing themselves to other people on the show."

As for Kim, Thomas calls her one of the success stories of "Hoarders." She "gets that it's a slow, gradual process -- she was one of those people where, as [the crew] was leaving, she really put the pieces together that small, daily actions have big results."

Participants are also offered six months of after-care. And since the show, Kim has continued to make progress. "I'm much more aware of the right thing to do. Now I have a process where I do [the cleaning] routinely," she says. Kim mentioned, perhaps a bit self-consciously, that the producers wouldn't let her clear out the cans of Diet Coke that cluttered her living room tables before the shoot began, urging her not to tidy anything up before they arrived; now she's a "big recycler." Before the show, Kim says, her efforts to clean ended up feeling like "two steps forward, three steps back," but she says her participation on the show gave her a new perspective about how to stay on top of the clutter.

"Hoarders" may have a rehabilitative effect on more than just its participants. After finishing the premiere, I turned off the TV and ejected the screener. I could have gone to bed, tired and with a hand cramped from writing notes, but I didn't. I opened my hall closet, dirty clothes spilling everywhere, and made the trip down to the laundry room. I pulled a tuft of cat hair from a corner in the living room and tossed it in the garbage can. Tomorrow, I told myself, I'd clean the whole house. It was time.

This story has been corrected since publication.

Tess Lynch is a writer living in Los Angeles. She has contributed to The Awl, This Recording, and Urlesque. You can read more of her essays on her cluttered blog, Wipe Your Feet.

Tess Lynch is a writer living in Los Angeles. She has contributed to The Awl, This Recording, and Urlesque. You can read more of her essays on her cluttered blog, Wipe Your Feet.