The world's most famous prune is French, but California grows its clones. Is there a difference between them? 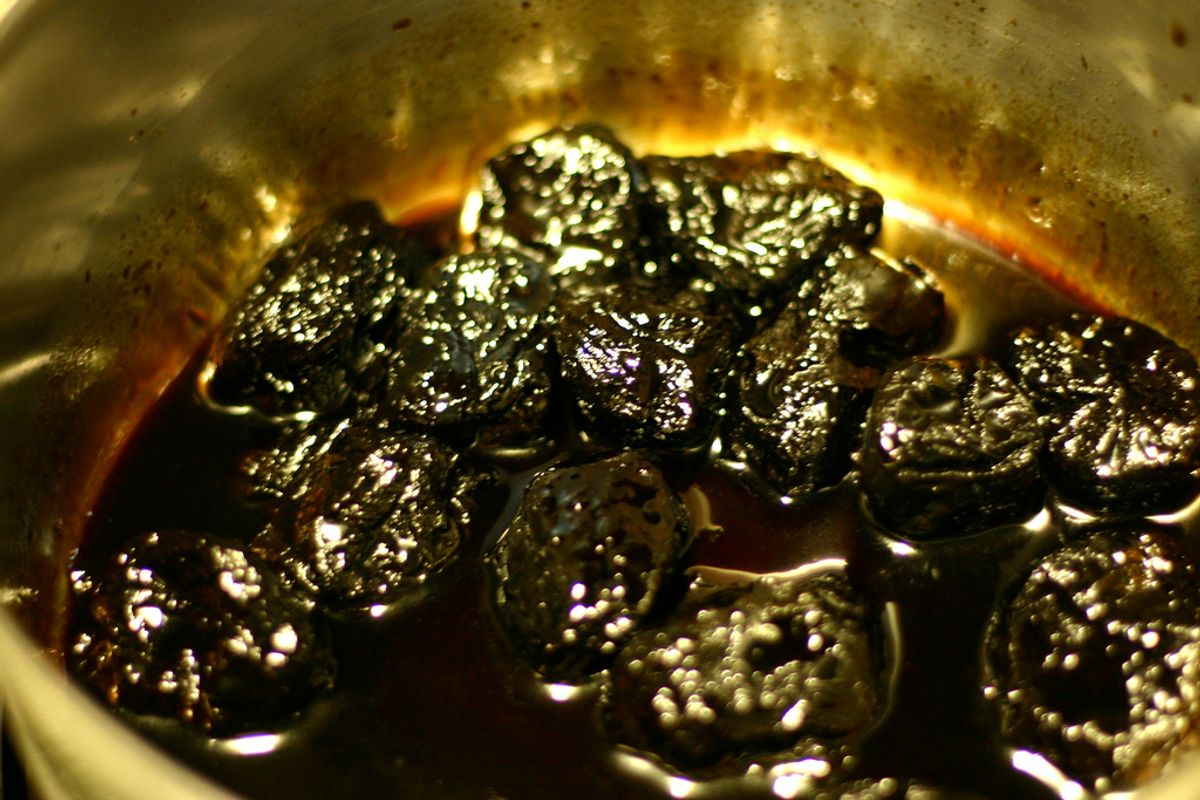 The most famous prune in the world, the pruneau d'Agen, has been a celebrated product of southwest France since at least the 1500s, outliving -- and even thriving because of -- several nearly existential threats.

The variety of plum grown to be dried into these prunes is the Prune d'Ente, chosen after the winter of 1709 killed many trees, requiring widespread replanting. Its taste was superior to that of previous varieties, its fruit was larger and higher yielding, and it was well-adapted to the region. Agen prunes were a huge success, heavily exported, until the two world wars of the 20th century devastated production, creating another chance for selecting and propagating especially fine specimens. From 1943 to 1949, French government researchers on bicycles, knowing that the variety embraces many clones, selected 60 outstanding trees and reduced those to the six best. One of them, assigned the number 707, now makes up roughly three-quarters of all the Prune d'Ente planted in France, which under the Indication Géographique Protégée, awarded by the EU in 2002, is the only variety permitted.

The Central Valley of California is the world's largest producer of prunes, and their quality, too, can be high. Genetically, there may not be a great difference between Agen prunes and those raised in California. The U.S. variety is French Improved, descended from examples of Prune d'Ente imported in the mid-19th century. (The 707 didn't do well in California.) Differences in taste may come from differences in climate and in pruning. The latitude of the Agen orchards, followed around the globe to North America, runs a little north of Toronto, and the French trees, which receive signiﬁcant rain during the growing season, are pruned to be open, so the fruit is exposed to the sun. The Central Valley trees, in contrast, grow in much greater heat and receive little or no rain; they require irrigation and are pruned so the foliage will protect the fruit.

Besides effects of clones and location, any edge of ﬂavor in the Agen prunes might be due to slightly greater ripeness at harvest. Not that there is a difference in goal, but the Agen growers may achieve it more often. In California, the time to harvest is determined by measuring the softness of the fruit, which is linked to sweetness; growers aim to pick when resistance to pressure, applied to the fruit with a penetrometer, falls to between three and four pounds. But in France, explains Jean-Michel Delmas, a grower, farm-union activist, and historian of the pruneau d'Agen, the growers measure the sweetness directly with a refractometer, looking for 21 degrees Brix -- each degree equaling approximately 1 percent sugar -- and sometimes achieving much more. (Ripeness often used to be determined by the plums themselves, which fall from the tree as they become ripe. Growers would spread straw on the ground as a cushion to prevent bruising.) The harvest in nearly all the Agen plum orchards is now mechanized, and the machines, which shake the trees and catch the fruit, pass four to seven times, as the fruit ripens. In California, similar machines harvest much more aggressively, passing just once to gather all the fruit from the tree.

Long ago, the Agen plums were dried in the sun or on farms in warm bread ovens. Today mechanical driers reduce the moisture to 21 to 23 percent for keeping, and then in a recent innovation that quickly became universal in the region, before packaging they are rehydrated to 35 percent. That gives a more luscious consistency, and there's no longer a need to soak before use.

Most California prunes are now pitted, but only about half the French ones are. Although French technical experts say that last-minute pitting before packaging has no effect on ﬂavor, Delmas thinks differently. "In fact," he says, "a large part of the ﬂavor comes from the presence of the pit. Without it, the plum loses the heart of its aroma." He associates the pit with a violet perfume. Among the local dishes he eats frequently are prunes with rabbit or with pork as well as with beef, in a daube, a red-wine braise.

To ensure safekeeping, producers of pruneaux d'Agen now add the preservative sorbic acid or its relatives or they pasteurize at 70 degrees C, giving a slightly darker color and a more concentrated, caramel ﬂavor. When I made a side-by-side comparison of some Agen prunes (pitted, no preservatives) with two California brands (pitted, with preservatives), the Agen were softer and moister, thinner-skinned, sweeter, with slightly fruitier, somewhat stronger ﬂavor and a longer aftertaste. But, alas, the Agen prunes cost nearly double.