Chile pork tamales, even if you don't have a Mexican grandma

My grandmother used to command our family of tamale-makers. When she passed, I did it all myself, and you can too 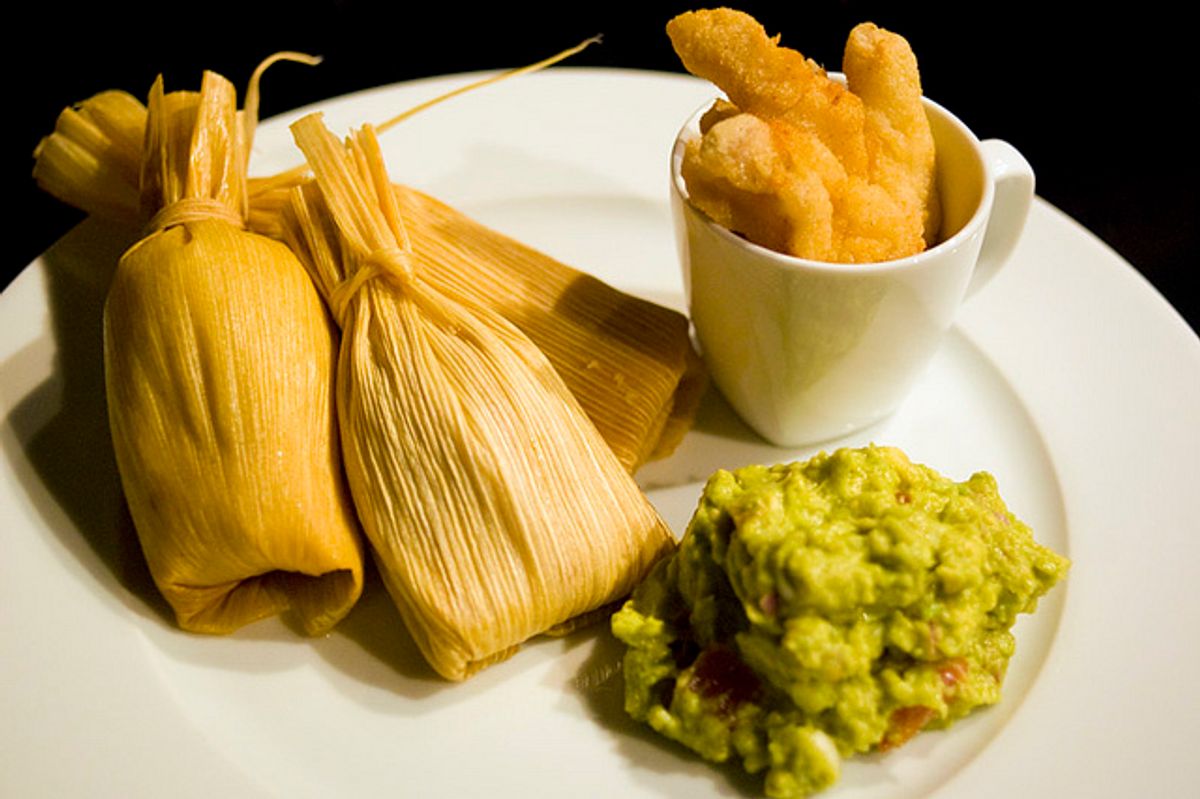 My family held parties to make tamales, tamaladas, at my grandmother's house the day after Thanksgiving every year from the time I was about 11 at least until I went away to college. My grandmother was wracked by arthritis my whole life and at some point it became quite a burden, and after my grandmother died I don't think anyone really had the desire to pull off such an undertaking.

It was missing my grandmother one year that led me to decide that I would make the tamales for the family, my Christmas present to everyone. What I had failed to realize was just how much brutal labor goes into tamales, especially if you hope to make a quantity large enough to feed a family the size of mine. If I wanted to, I could put away a dozen tamales myself and I needed to make enough to feed everyone. But I did it. Instead of doing them all the day after Thanksgiving, I did it in phases. I made the masa and put it in the fridge. I made the filling and put it in the fridge. I made a few tamales and put everything away. I did, over the course of a week to 10 days, what took an army of family members one day. By the time I was finished with those tamales, I was sick of them. Sick of looking at them. I was sick of scraping dried masa out from underneath my fingernails (which were connected to chili-stained cuticles, by the way). I never wanted to look at another tamale again. I was so tired of them I didn't even want to do the final cooking and then handed them off to my mother to finish, and I admit I got a little angry when she balked. Anyway, I gave them to my mom sometime in early December and didn't have to think about tamales again. When Christmas rolled around, I was eager to see how my first ever solo tamale adventure had gone. They were, if I do say so myself, excellent. They were fluffy, they were savory and they were made by someone in my family.

My family was so appreciative that suddenly all that work didn't seem so strenuous. As a result, every other year I make tamales. And I do it all by myself. At some point it became a burden I was happy to take on. I've learned a few things that have helped me streamline the labor and making them all by myself isn't such a big thing. I even render my own lard (because it's as healthy as shortening and tastes better than either shortening or store-bought lard). I do it ALL. I sometimes miss my cousins and my extended family being around, but we've all gotten older, our lives have become more far-flung and most of us have kids of our own. I miss the tamaladas I used to attend (but didn't know I was attending), but I adore the new tradition of being able to show my family how much they mean to me and I love the feeling of completing all that work.

Last year was an "on" year for me to make tamales. The way I usually work is to set up a card table in front of the television for the actual assembly phase. While there is a lot of kitchen time in the preparation of the filling and the masa, when you're putting them together, you can do it from your club chair while you watch college football on your big-screen television. That was what I was doing last year when my 5-year-old daughter wandered into the family room and said, "Can I help you, Daddy?" I knew I'd have to change channels from my football game to Wonderpets (Theme song: What's Gonna Work? TEAMwork!) I handed her a butter knife, showed her how to spread the masa and smiled as my blue-eyed, fair-skinned, one-quarter Mexican daughter unknowingly wandered into her first tamalada.

This recipe makes about 18 tamales but I usually triple or quadruple it for a family as large as mine, and here, to start, are a few tips to help you out:

Start with a pork stock: Start by buying about two pounds of bone-in "country-style" spare ribs and cut out the bones. You can either roast the bones until they're brown and then drop them in a stockpot or just put them in the stockpot. Chop up an onion and put it in with some smashed garlic cloves and maybe a chopped carrot and a stalk of chopped celery. Cover with cold water and simmer gently until you have a flavorful stock. Strain and let it cool. (This can be done in advance and even frozen well ahead of time as long as you thaw it before use.)

To set up the steamer: Steaming 20 tamales can be done in batches in a collapsible vegetable steamer set into a large, deep saucepan (if you stack the tamales more than two high they will steam unevenly) but it's a balky process. To steam the whole recipe at once, I recommend something like the kettle-size tamale steamers used in Mexico (available inexpensively at Latino markets) or you can improvise by setting a wire rack on 4 coffee or custard cups in a large kettle with plenty of water underneath.

It is best to line the rack or upper part of the steamer with leftover scraps of corn husks to protect the tamales from direct contact with the steam and to add more flavor. Make sure to leave tiny spaces between leaves so condensing steam can drain off.

To do this in stages:

Both filling and batter can be made several days ahead, as can the finished tamales; refrigerate, well covered. Resteam (or even microwave) tamales before serving. For even more flexibility, batter, filling or finished tamales can be frozen. Defrost finished tamales in the refrigerator overnight before re-steaming.