Obama is to Wall Street as ... Hitler was to Poland? 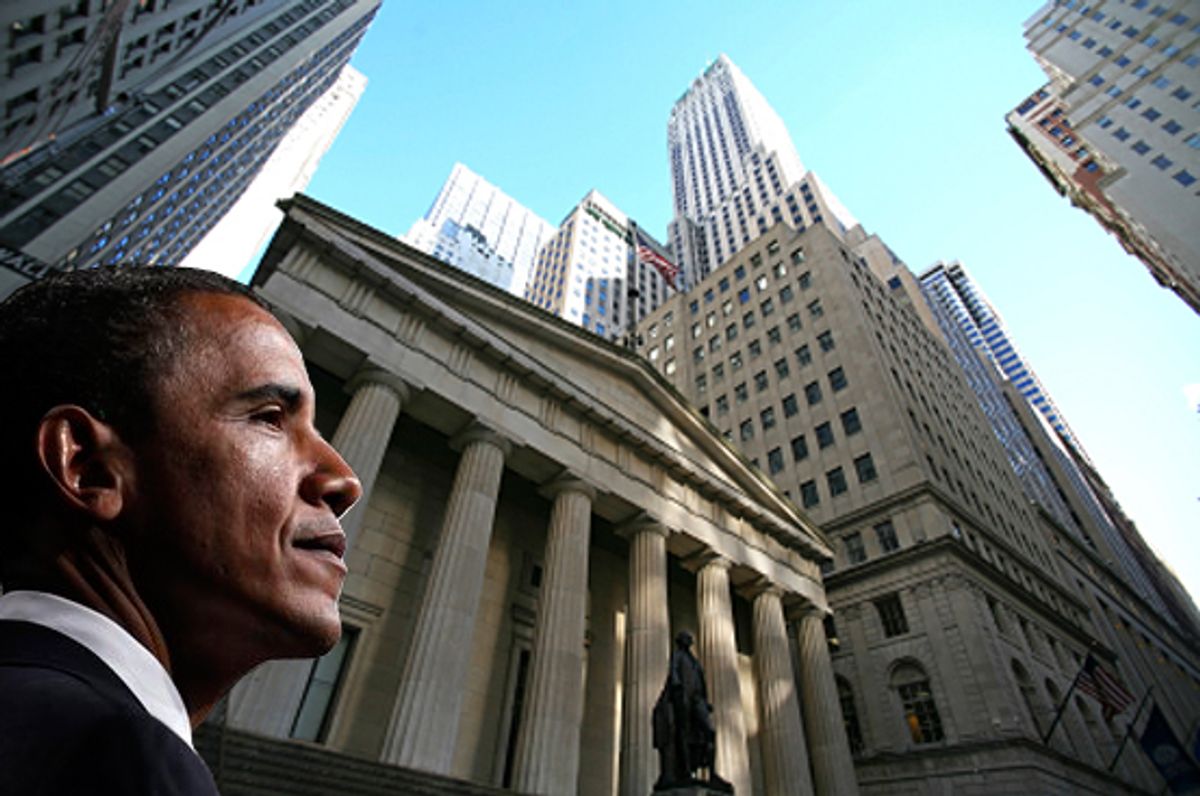 Has the war of metaphors gone too far? Historians, constitutional lawyers and even zoologists have jumped into the fray provoked by Wall Street critics of the Obama administration and Congress.

It all began when Stephen A. Schwarzman, a co-founder (with right-wing Republican deficit hawk Pete Peterson) of the Blackstone Group, a major private equity firm, said that the Obama administration’s proposals for taxing partners in firms like his brought to mind "when Hitler invaded Poland in 1939."

Schwarzman’s critics have included fellow members of the financial industry like Robin Plunder of Dewey, Schwindel and Howe, a major U.S. pump-and-dump firm. "That comparison was way too kind to President Obama," Plunder wrote in his monthly letter to his co-conspirators. "Let’s remember that Poland provoked Hitler, after all. But Wall Street had nothing to do with the financial crisis."

Unlike Plunder, however, many financial historians think that Schwartzman’s comparison of President Obama to Chancellor Hitler was too harsh. "It’s way over the top," says Shirley U. Geste, the Ken Lay Memorial Professor of Financial Ethics at William Duer University. "Hitler’s invasion of Poland? No way. I think it would be much more accurate to compare the administration’s proposals for higher taxes on partners in private equity firms to the Hyksos invasion of Egypt in the seventeenth and eighteenth centuries B.C., which destroyed the 13th Dynasty and ended Egyptian unity until the Hyksos were finally driven out during the 17th Dynasty by Seqenenre Tao II and his son Kamose."

Other financial experts, like Engelbert Homunculus, the Samuel Insull Professor of Predatory Finance at the Gotham City Correspondence School, see other analogies: "I would compare the administration’s tax proposals to the sacking of Baghdad by the Mongol leader Hulaga Khan in 1258. That’s a much closer fit, I think, than the Hitler and Poland thing."

Schwarzmann is not the only Wall Street figure whose bloviations have stimulated debate in the halls of academe as well as the corridors of power. Daniel S. Loeb, a major Democratic fundraiser with the hedge fund Third Point, created a similar stir when he wrote: "As every student of American history knows, this country’s core founding principles included nonpunitive taxation, constitutionally guaranteed protections against persecution of the minority and an inexorable right of self-determination. Washington has taken actions over the past months, like the Goldman suit that seem designed to fracture the populace by pulling capital and power from the hands of some and putting it in the hands of others."

"It is, of course, true that the Founders intended the Constitution to enshrine the principle that hedge fund managers and other people in the financial industry should pay much less as a proportion of their income than their secretaries and similar commoners," observes Dudley Gray Prose, author of the best-selling study Diet of Controversy: How to Lose Weight on What the Founders Ate. "Even so, I wouldn’t put nonpunitive taxation at the head of a list of the country’s core principles. I think that in any list of core American governmental principles, subsidies for politically well-connected businesses should go first."

The controversy over the attacks on the Obama administration by members of the Wall Street elite has been accompanied by a continuing furor over the comparison by former Republican Senator and deficit commission member Alan Simpson of Social Security to "a milk cow with 310 million tits." Zoologists around the country were uniformly critical of Simpson’s metaphor, pointing out that it was anatomically unlikely, if not impossible.

Nigel Doolittle, head of the Zoology Department at the Museum of Natural History in Puddleby-on-the-Marsh, muses: "We scientists recognize that Sen. Simpson makes an important point about the worthlessness of American retirees who expect to be repaid after paying Social Security taxes all their lives. After all, they had a chance to get rich and they failed. But I think he would have been better advised to compare elderly Americans to something other than 310 million calves -- say, a swarm of insatiable piranhas in a frenzy, devouring a gaucho’s pony that has tragically strayed from the pampas and stumbled into the turgid currents of the Rio Parana."

"A plague of flesh-eating bacteria devouring Uncle Sam" is how another eminent biologist, Noah Arkwright, professor of parasitology at Wossamata University, thinks Simpson should have described American retirees who depend on Social Security because their low wages prevented them from accumulating high levels of personal savings. Professor Arkwright points out that it is not too late to get the metaphors right. "From the point of view of natural science as well as budgetary analysis, it is crucial that any parasitological metaphors included in the deficit commission report, in addition to vilifying hard-working, ordinary Americans who depend for their retirement income on Social Security, should be zoologically plausible. You wouldn’t want it to seem like mere political rhetoric."