"I have hardly the words that somebody would do that to somebody's religious book," the actress says 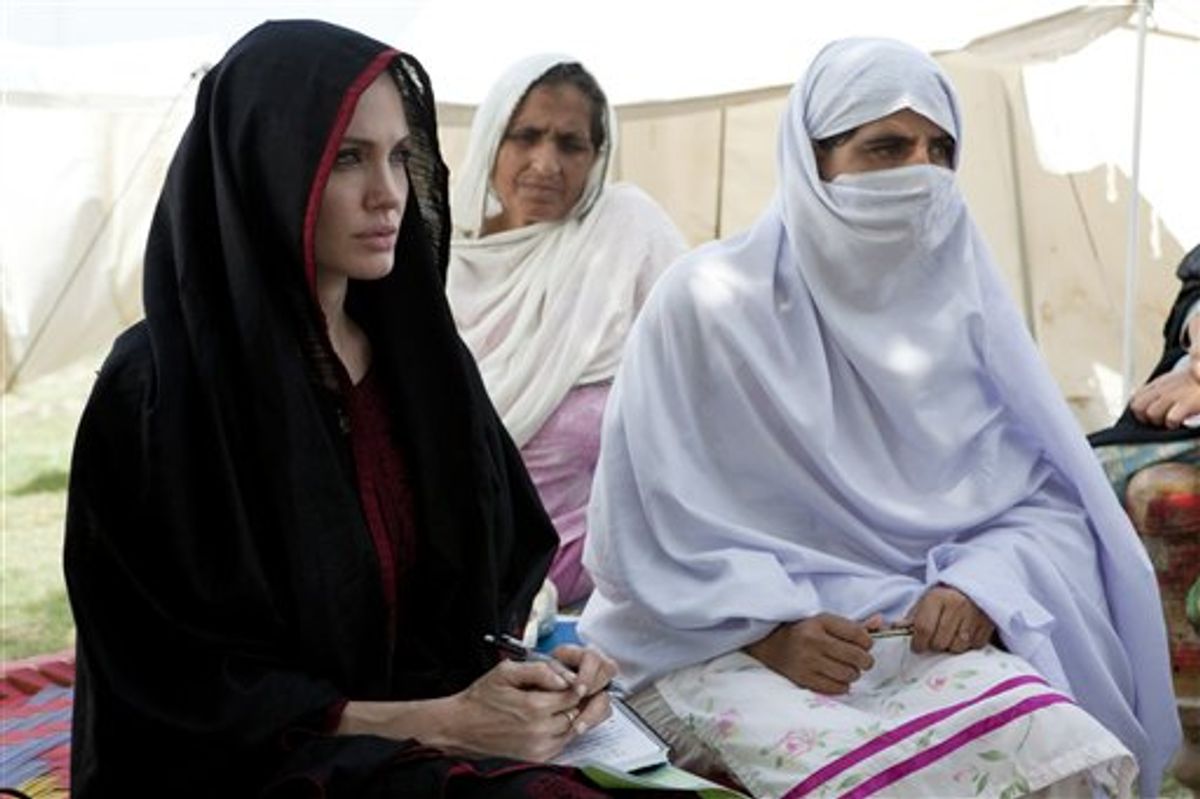 In this photo provided by the United Nations High Commission for Refugees, Angelina Jolie, left, the goodwill ambassador of UNHCR, sits with Pakistani flood-affected women during her visit to a camp for people displaced by heavy floods in Nowshera, Pakistan, Tuesday, Sept. 7, 2010. (AP Photo/United Nations High Commission for Refugees, J. Tanner) ** NO SALES, NO ARCHIVE, EDITORIAL USE ONLY ** (AP)
--

Angelina Jolie on Wednesday condemned a Florida church's threat to burn copies of the Muslim holy book to mark the ninth anniversary of the Sept. 11 attacks.

The 35-year-old actress spoke out against the proposed burning during a trip to Pakistan to raise awareness about the floods that have devastated the largely Muslim country over the last six weeks. She visited in her capacity as a goodwill ambassador for the U.N.'s refugee agency.

Jolie's criticism echoed that of top U.S. officials, who have described the church's plan as a disgraceful act and have even warned that it could endanger U.S. troops in Afghanistan and Americans worldwide.

"I have hardly the words that somebody would do that to somebody's religious book," Jolie told reporters in Islamabad after visiting refugees camps in northwestern Pakistan -- one of the areas of the country hit hardest by the floods.

The Christian minister organizing the Quran burning, Pastor Terry Jones, has said he plans to go ahead in spite of concerns. He is part of the Dove World Outreach Center, a tiny, evangelical Christian church in Gainesville, Florida, with an anti-Islam philosophy.

The issue has not gotten much attention in Pakistan, where officials and residents have been trying to cope with the devastation caused by floods that first hit the country at the end of July following extremely heavy monsoon rains. The floodwaters have killed more than 1,700 people and have affected over 18 million others.

"I was shocked especially by how high the floodwaters went," said Jolie, who wore a long dress and covered her hair with a black scarf in keeping with local Muslim custom. "In some of the people's houses, it was nine feet (three meters) high."

U.N. officials have expressed hope that Jolie's visit would help spark the fundraising campaign to help Pakistan, which has stalled in recent days. The U.N. issued an appeal for $460 million in emergency funds on Aug. 11, but only $294 million, or 64 percent, has been received so far even though it is one of the worst natural disasters in recent years.

"There's lots of speculation about why this one has not gotten the attention it deserves," Jolie said. "Even all of the wonderful coverage ... is not getting the response that usually it's able to get."