They wouldn't make the same disastrous miscalculation again. Or would they? 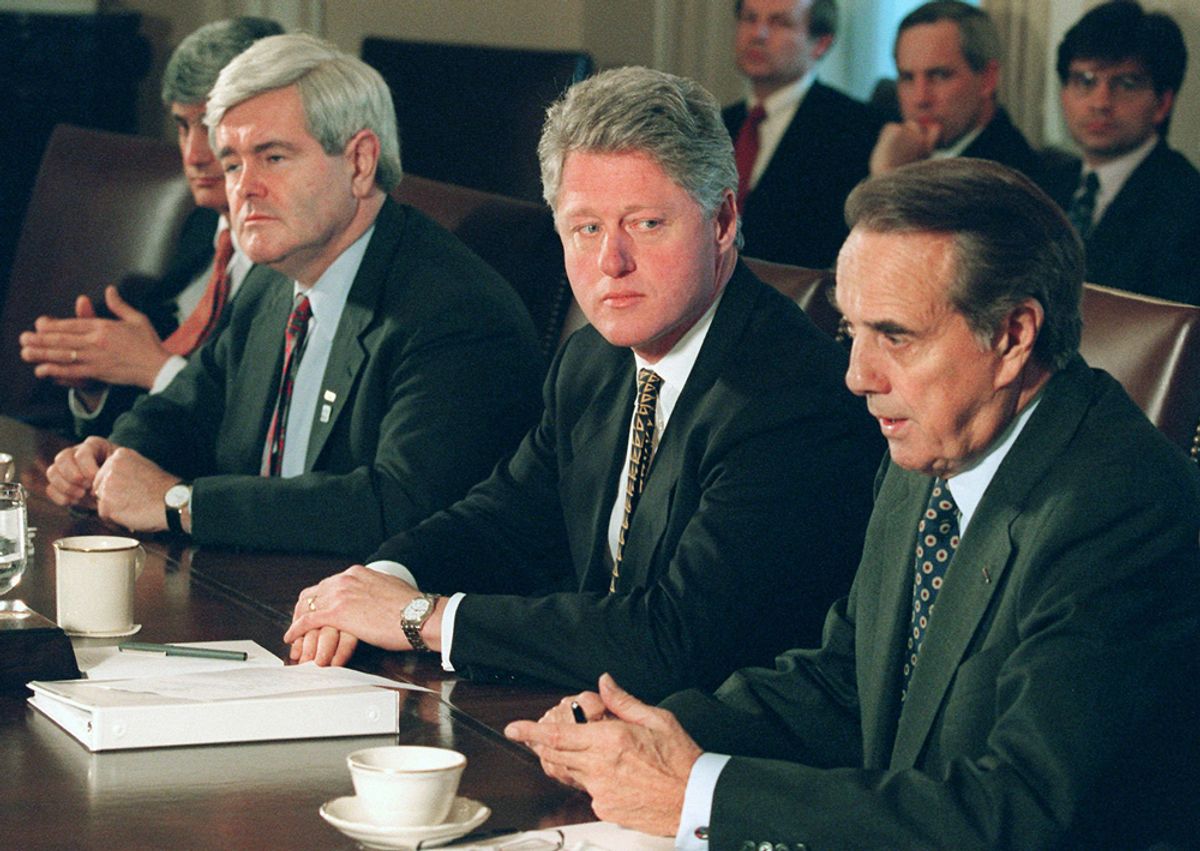 In the same way that many of them still -- after all these years and against all available evidence -- would rather chalk up Bill Clinton's 1992 victory to the presence of Ross Perot than to their own deficiencies, there are Republicans who still refuse to accept the reality of what happened when they forced a shutdown of the federal government in 1995.

That's probably the best way to understand the eagerness with which so many on the right are now openly agitating for another GOP-forced shutdown.

The idea, of course, hinges on this fall's elections essentially producing a repeat of the 1994 midterms, with Republicans winning back control of Congress -- setting up a partisan balance of power similar to the one that existed in '95, when Clinton was president, Newt Gingrich was House speaker and Bob Dole was the Senate’s majority leader.

Then, the GOP would do what it did in '95: take a concept that polls well, fold it into the budget and send it to the president’s desk, daring him to shut down the government by vetoing it. Back in '95, the hot idea was a balanced budget, an issue that had played an unusually prominent role in the 1992 presidential race. In 2011, it would be healthcare, with Republicans now talking of using the budget to zero out funding for the aspects of the new law that fare the worst in polling. You can already hear the attacks now: President Obama wants to force you to buy health insurance so badly that he’ll close down the government to make it happen!

Gingrich himself helpfully laid out the 2011 strategy a few months ago. Per Dave Weigel:

"By 58 to 38, people want to repeal the healthcare bill. It'll get worse as people learn more and as the failure of the bill becomes more obvious. So if you take that model, all the Republican Congress needs to say in January is, 'We won't fund it.' What the president needs to decide is: He's going to veto the bill. He needs to force a crisis on an issue that's a 58 to 38 issue. And it's going to get worse. It'll be 2 to 1 or better by the time we get down to the fight. Because this bill is terrible."

Here’s the problem: The 1995 shutdown was a certifiable disaster for Gingrich and the GOP -- the moment they let Clinton, whose presidency had appeared over after the ’94 midterms, back into the game.

From the instant the shutdown began that November, the public sided overwhelmingly with the president, whose job approval ratings instantly recovered to levels not seen since the early days of his presidency. Long derided as slippery and spineless, Clinton portrayed his veto as an act of principle and responsible leadership, while the Republicans were made to look like immature ideological zealots. Virtually overnight, Clinton took the lead in 1996 trial heats against Dole, which he never surrendered.

But Gingrich can’t admit this now. To concede the truth -- that a massive strategic error on his part helped pave the way for Clinton’s reelection and that, more broadly, the tone-deaf nature of his speakership represented one continuous, four-year political gift to Democrats -- would threaten his role as one of the right's leading public voices today. So, instead, he's concocted an alternate history, one that paints the shutdown as a policy and political triumph for the GOP. As he said to Weigel, "Tell me in what way we didn't win."

Nor is the actual history of the '95 shutdown (technically, the '95-96 shutdown; the second shutdown period lasted one week into the new year) something that the GOP’s Tea Party base is interested in heeding, either. Some of them apparently prefer a different revised history, one that holds that the shutdown would have been a political winner for the GOP, if only Gingrich hadn't mucked it up by whining about a supposed Air Force One snub from Clinton (and seeming to suggest that the GOP's budget demands were payback).

Others simply seem oblivious to what happened, displaying the same ideological fervor that marked the far right GOP freshman class of '94, which came to Washington itching for a showdown with Clinton. As Joe Miller, the surprise Republican nominee for Senate in Alaska, put it last week, next year's Republicans, if they control Congress, should have "the courage to shut down the government."

But there really is good reason to believe that a 2011 shutdown would backfire against Republicans just like the '95 one did. For one thing, the setup is -- or would be -- awfully similar: a Republican majority in the House with a large, ideologically pure freshman class at its heart that is convinced its midterm election triumph marked a decisive, permanent rejection of a Democratic president and his philosophy.

Gingrich and his House freshmen couldn't fathom a scenario under which the public would turn on them if they demanded that Clinton sign their balanced budget plan. After all, voters didn’t like Clinton and hated deficits: Hadn't that been the combined message of the '94 and '92 elections? Others on the right saw an added opportunity in a shutdown: How many people would realize that their lives were no worse without the government and become converts to the conservative cause? (That same spirit is in evidence today. Just consider blogger Erick Erickson’s recent declaration, via Twitter, that "I’m almost giddy thinking about a government shutdown next year. I cannot wait!")

But the logic of the electorate tends to be more contradictory than coherent. Sure, voters hate the idea of deficits and love the notion of a balanced budget. But they also like Medicare, which Gingrich’s GOP targeted for cuts in its plan, and are made uncomfortable by anything that seems radical -- like a government shutdown, even if it doesn't personally affect their lives.

This explains why the '95 shutdown was such an instant and enduring loser for the GOP. After a months-long game of chicken and with emergency funding for government operations set to expire, Clinton vetoed a stopgap budget passed by Republicans on Nov. 13, triggering a shutdown the next day. The entire government wasn't closed -- hundreds of thousands of workers were deemed essential and kept on without pay – but National Parks were shuttered, some visa and passport services were halted, and some pension and public assistance programs were also stopped.

It was all necessary, Clinton told Americans, because Republicans had tried "to force us to accept extreme budget measures that would violate our basic values as a nation and undermine the long-term welfare of the American people."

Public opinion immediately favored the White House. A Gallup poll released after the first day of the shutdown found that 49 percent of voters blamed Republicans, while only 26 percent faulted Clinton. By a 48 to 38 percent margin, voters said that protecting Medicare and the social safety net was more important than balancing the budget. And by a 49 to 36 percent margin, they said they trusted Democrats over Republicans to decide which programs to cut in order to balance the budget.

Overall, 48 percent approved of Clinton’s handling of the impasse. For Dole, that number was 32 percent -- and for Gingrich, it was just 22 percent. Notably, Gingrich’s infamous "crybaby" moment -- in which he groused about being ignored by Clinton on a flight back from Yitzhak Rabin’s funeral earlier that month -- came after this poll was released. In other words, present-day claims that public opinion only turned on the GOP after Gingrich put his foot in his mouth are inaccurate: The public was already against them. By Nov. 20, another Gallup poll pegged Clinton’s approval rating at 53 percent, the highest it had been in nearly two years. Suddenly, the '94 midterm debacle seemed like ancient history.

Quickly, Gingrich and the GOP agreed to a stopgap measure to reopen the government, one without the cuts they sought. When that expired in mid-December, another shutdown ensued, this one lasting until Jan. 6. In that time, nearly 300,000 federal workers were furloughed while 480,000 "essential" employees worked for free. Politically, the outcome was no different: The GOP took the brunt of the blame, while Clinton established presidential stature.

"It’s beginning to look like we can't run the government," Marge Roukema, one of the few GOP moderates left in the House, said at the time.

Eventually, a compromise was struck, but Republicans never got their cuts. The episode was a clear triumph for Clinton, who led Dole wire to wire in '96, ultimately winning 379 electoral votes. You’d think this would serve as a cautionary tale to today’s Republicans. But, instead, many of them seem intent on affirming the cliché about what happens to those who don’t bother to learn history.