Why they want to burn the Quran 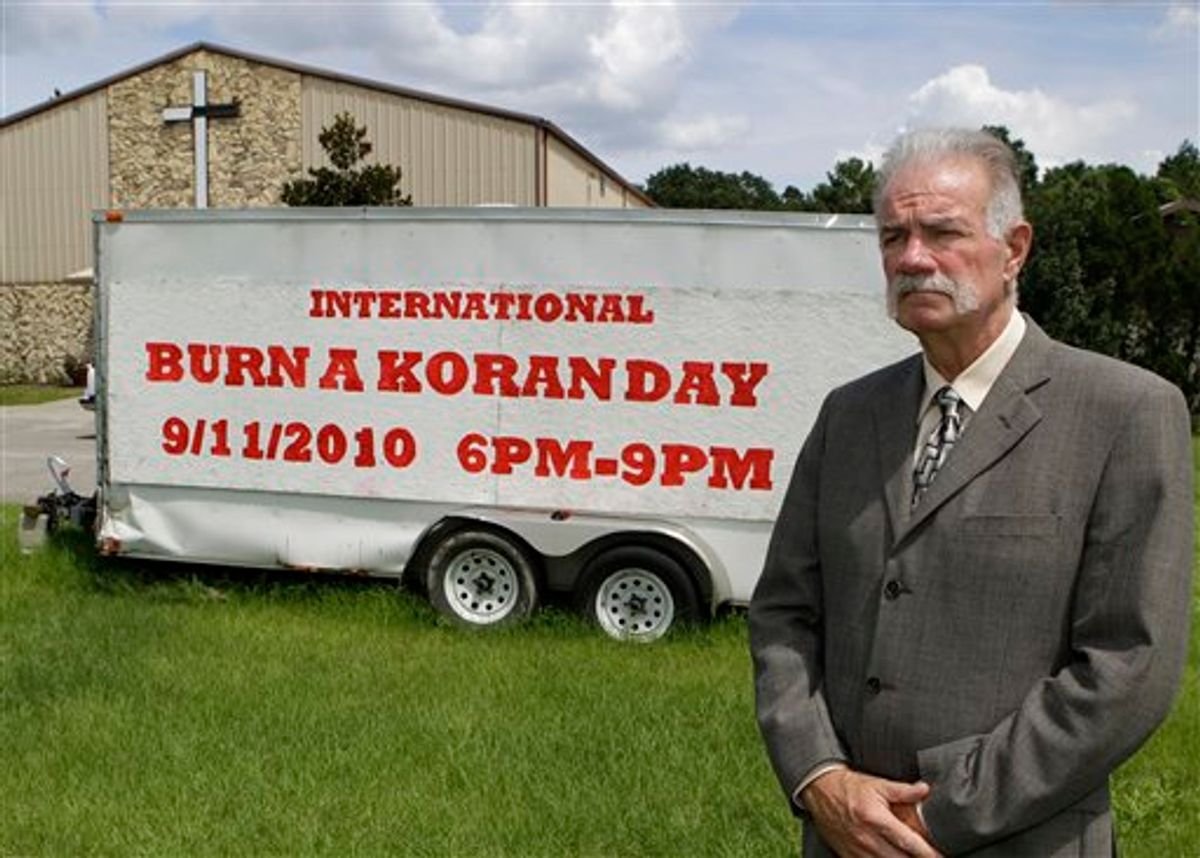 Had Gen. David Petraeus never condemned a Florida church’s ceremonial destruction of the Quran scheduled for Saturday, Sept. 11, it is hard to imagine that many of his admirers on the political right would have protested. But with the general's warning that video of such a provocative act of hate would endanger the lives of American personnel abroad, both military and civilian, and serve the purposes of our enemies, he etched a line of demarcation. Suddenly, prominent right-wing commentators sprang forth to agree that burning books is beyond the limit of tolerable intolerance and denounced Pastor Terry Jones and his Dove World congregation as stupid, tasteless, repugnant and all too reminiscent of Nazism.

Or at least some did, even as Republican politicians remained silent on the Florida outrage. What should have been an opportunity for reflection on the national mood of Muslim-bashing bigotry -- and especially how that mood was conjured -- instead became an occasion to preen and pretend that the little band of idiotic rubes in Florida could not possibly have been inspired by the "sophisticated" critics of Islam on Fox News, talk radio and the Internet.

Nobody is more repelled by the prospect of flaming Muslim holy books than Jonah Goldberg, according to him. But having forthrightly declared his dismay, the National Review blogger seems bewildered by the reaction of his readers -- some of whom sharply question his tart condemnation of Jones and suggest that he and Petraeus were promoting Islam over Christianity. The distressed Goldberg, who pilloried liberals as "fascists" in his own famously tortured interpretation of history and didn’t bother to note the irony in his discovery that there are real live book-burners on his side of the spectrum. And notwithstanding this experience, he may still believe, as he wrote in late August, that "Americans who oppose what amounts to an Islamic Niketown two blocks from ground zero are the real victims of a climate of hate, and anti-Muslim backlash is mostly a myth."

Obviously, Goldberg isn't listening to the likes of Newt Gingrich, the former House Speaker and aspiring presidential nominee, who compared Islam to Nazism and Japanese imperialism in symbolic offensiveness to Americans. Having repeatedly denounced the construction of the Park51 center as a "radical Islamist" provocation that should be prohibited by Congress, Gingrich has yet to emit a tweet admonishing those who would torch the Quran.

Still, most conservatives would no doubt be alarmed by a book burning, whether of the Quran or any other work. Yet they seem strangely oblivious to how Islam was relentless demonized by figures in their movement, especially over the Park51 controversy, and how that furious drumbeat would encourage the burning of the Quran. They consistently refuse to take responsibility for their own role in encouraging those rancid emotions.

Indeed for many years, neoconservative intellectuals have allied themselves with the religious right, which is scarcely news; they agree on many issues, most notably in their unquestioning defense of Israeli policy. And they agree -- or agree not to disagree -- on attitudes toward Islam. In practice, those tacit agreements have meant that conservatives and neoconservatives disregard the sulfurous flood of anti-Muslim rhetoric and "revelation" spewing from preachers far more influential than Pastor Jones. Rarely condemning the faith-based hostility of their allies, the conservatives and neocons have chosen to ignore it.

A telling incident occurred during the 2008 presidential race, when John McCain sought and received the endorsement of a nationally known Texas pastor named John Hagee. When Hagee’s sickening quotes about Catholics, Jews and Muslims were disclosed in media reports, McCain dumped him. But Bill Kristol spoke up on behalf of his friend Hagee -- who looks forward to a "final confrontation" between the West and Islam because the Quran supposedly commands Muslims to murder and enslave Christians and Jews. "I think, actually, some of the attacks, especially on Reverend Hagee, are unfair," said Kristol on "Fox News Sunday". He knows, of course, that none of the criticism of Hagee was unfair -- unless it was unfair to quote him accurately from his own books and sermons.

Despite the constant outpouring of anti-Muslim demagoguery from religious right figures such as Hagee, Rod Parsley, Franklin Graham and literally dozens of others, it is also true that Christian and Jewish leaders, including important evangelicals, have behaved with considerably more vigilance and principle in defending the religious liberties of Muslims than conservative politicians and commentators.

With very few exceptions, the failure of the political right to defend those liberties is so broad and complete that a recent word of dissent from that quarter is well worth quoting at length -- particularly because it comes from a surprising source. The credentials of Daniel Pipes as a critic of radical Islam can scarcely be questioned; he has gone so far as to justify the Japanese-American internment as a precedent for profiling American Muslims. Anyone who doesn’t believe that Islamophobia has infected the right should listen carefully to him.

Even as Pipes hails the rise of an "angry, potent movement" in the reaction to Park51, he sounds worried:

The energetic push-back of recent months finds me partially elated: Those who reject Islamism and all its works now constitute a majority and are on the march. For the first time in fifteen years, I feel I may be on the winning team.

But I have one concern: the team’s increasing anti-Islamic tone. Misled by the Islamists’ insistence that there can be no such thing as “moderate Islam,” my allies often fail to distinguish between Islam (a faith) and Islamism (a radical utopian ideology aiming to implement Islamic laws in their totality). This amounts to not just an intellectual error but a policy dead end. Targeting all Muslims is contrary to basic Western notions, lumps friends with foes, and ignores the inescapable fact that Muslims alone can offer an antidote to Islamism.

What Pipes and his cohort won't acknowledge is that an angry movement against the construction of an Islamic community center inevitably encourages a movement against Islam and Muslims itself. Yes, most conservatives despise the burning of the Quran -- but shouldn't they ask themselves who lighted the match?