The President makes a case for social justice. It's time for the wealthy to pay their fair share 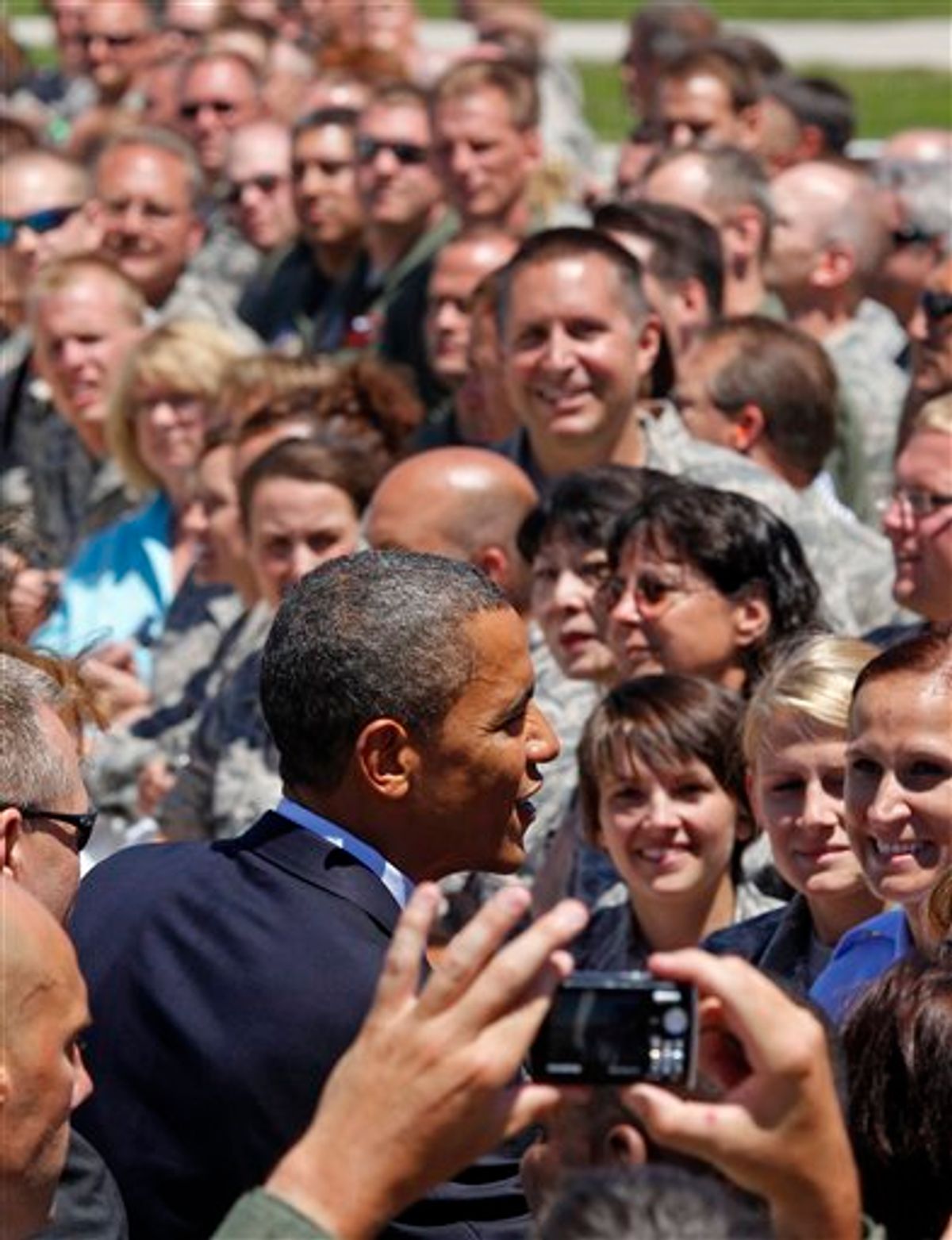 FILE - In this June 30, 2010 file photo, President Barack Obama greets members of the Wisconsin National Guards 128th Air Refueling Wing upon his arrival at Mitchell International airport in Milwaukee, Wis. When President Barack Obama makes his third Wisconsin visit in a little over two months Monday, he will get a chance to shore up his base at a Labor Day rally in a state where his approval ratings are dipping and fellow Democrats face tough re-election bids. (AP Photo/Jeffrey Phelps, File) (AP)
--

When Barack Obama's newly retired budget director, Peter Orszag, devoted his first New York Times column on Tuesday to a proposal that all the Bush tax cuts, for both the middle class and the wealthy, be extended for another two years, you could feel progressives all across the country rolling their eyes en masse.

Repealing the Bush tax cuts for the wealthy had been a plank in Obama's platform since the 2008 campaign. But in recent weeks, as it became clearer and clearer that "Recovery Summer" was fizzling, and one prominent Democrat after another began hemming and hawing over whether it was a good idea to impose any kind of tax increase at all, the writing seemed on the wall. The Democrats would cave, again. Edmund Andrews, the former New York Times reporter and chronicler of economic affairs, immediately labled Orzag's opinion piece a "trial balloon" -- presumably pre-approved by the White House, for keeping the tax cuts in place.

Though Orszag left the White House at the end of July, he and everyone else knows that he is still closely identified with the White House. This appears to be his first substantive public comment since leaving, and it wasn't an offhand remark in response to some question. I would be amazed if Orszag didn't run it past his former colleagues first.

Perhaps he did. But if so, one wonders what the reaction was. Because according to the current New York Times reporter Jackie Calmes, President Obama plans to announce today that he will not seek an extension of the tax cuts for the wealthy, thus setting up a direct confrontation between the administration and Republicans and wavering Democrats.

What is the president up to? At the same time as he plans to endorse repealing tax cuts for the wealthiest two percent of the population, he is also recommending a new tax write-off directly aimed at the business sector. With the economy continuing to suffer, one can be sure that Republicans -- and many economists, including Obama's own former budget director -- will argue that any tax hike is bound to be anti-stimulative. How can Obama, on the one hand, promote a set of tax cuts that will supposedly encourage investment and boost the economy, while raising taxes on the same people expected to make those investments?

Here are two arguments the president shouldn't make in his speech today in Cleveland outlining his new agenda.

1) Don't make this about the deficit. Sure, long-term, the deficit is a problem, and taxes will have to go up, but that simply isn't the necessary argument for the current moment. The dreaded bond market vigilantes are invisible, money is cheap, and the right prescription for the economy at this juncture is continued fiscal and monetary stimulus. Defending the repeal of the Bush tax cuts as a tactic for addressing the budget deficit just muddies the waters, and gets in the way of making a strong push for more direct economic intervention.

2) Don't try to thread the needle. The president could attempt a nuanced argument that targeted tax breaks encouraging corporations to invest in new plants and equipment will do more good than simply allowing the wealthy to continue to sit on their cash. A good case can be made that tax breaks for blue-collar workers and the middle-class are more stimulative than tax cuts for the wealthy. That's all true. However, sad to say, in the fall of 2010, the United States demonstrably has no appetite for nuance or complexity. For his entire term, the president has been all about compromises, all about attempts at incremental progress. And no one has ended up happy. The president's political opponents will block any initiative, simply because it comes from the White House. Nuance is wasted on the Tea Party.

Here's what the President should do (and appears to be doing): Make this about fairness.

Not only did the wealthiest Americans benefit the most from the anything goes Wall Street boom years, but they paid the smallest price for the economic collapse. While millions of Americans lost their jobs and their homes, they sailed right through. By calling for the repeal of the Bush tax cuts for the wealthy, Obama is putting down a political marker, and declaring that the rich must pay their fair share of the burden. Here's a message anyone can understand: I'm going to raise taxes on the rich and spend money directly creating jobs through infrastructure investments. With an election looming, that simple declaration tells the Democratic base whose side the President is on. It's a direct invitation to a fight to voters who are spoiling for a tussle.

And why not? The other side declared war on day one of his presidency -- it's high time to return the favor.