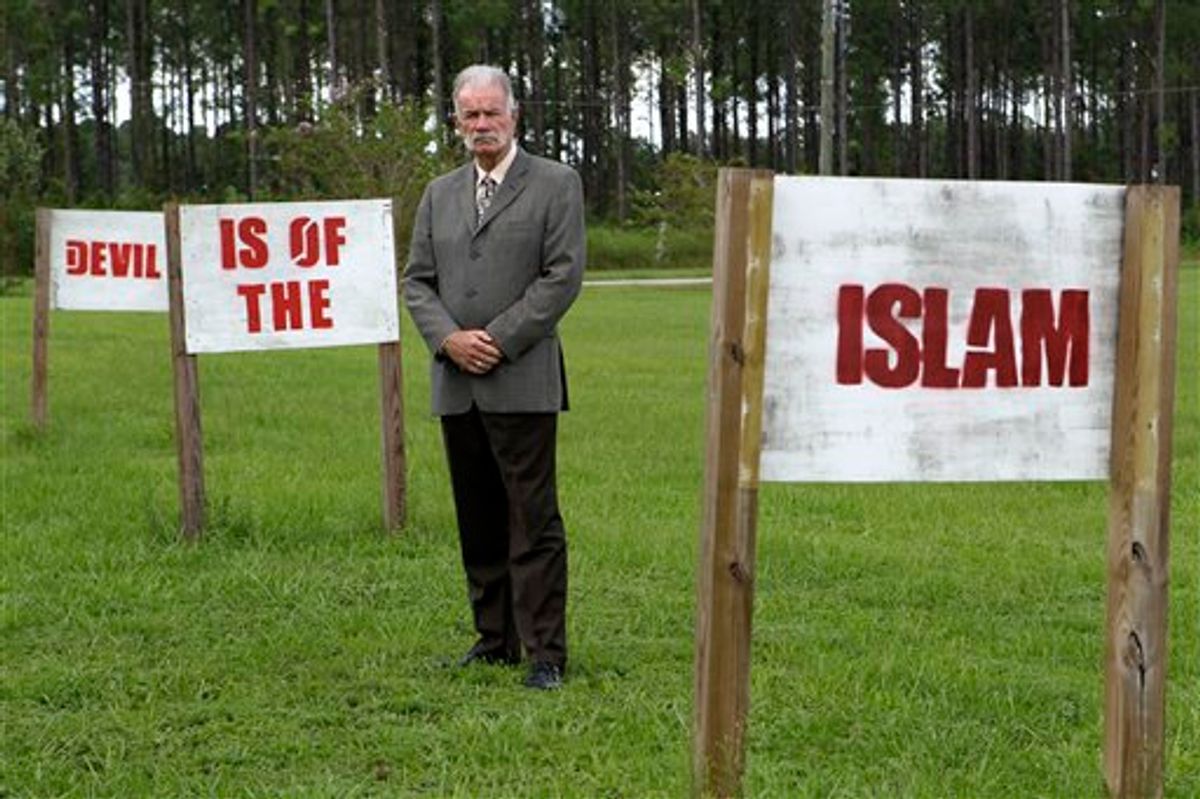 In this photo taken Monday, Aug. 30, 2010, Rev. Terry Jones poses for a photo at the Dove World Outreach Center in Gainesville, Fla. Jones vowed to go ahead with plans to burn copies of the Quran to protest the Sept. 11 terrorist attacks despite warnings from the White House and the top U.S. general in Afghanistan that doing so would endanger American troops overseas. (AP Photo/John Raoux) (AP)
--

The leader of a small Florida church that espouses anti-Islam philosophy said Wednesday he was determined to go through with his plan to burn copies of the Quran on Sept. 11, despite pressure from the White House, religious leaders and others to call it off.

"We are still determined to do it, yes," the Rev. Terry Jones told the CBS Early Show.

Jones says he has received more than 100 death threats and has started wearing a .40-caliber pistol strapped to his hip since announcing his plan to burn the book Muslims consider the word of God and insist be treated with the utmost respect. The 58-year-old minister proclaimed in July that he would stage "International Burn-a-Quran Day."

Supporters have been mailing copies of the holy text to his Gainesville church of about 50 followers to be incinerated in a bonfire on Saturday to mark the ninth anniversary of the 9/11 attacks.

Gen. David Petraeus, the top U.S. and NATO commander in Kabul, took the rare step of a military leader taking a position on a domestic matter when he warned in an e-mail to The Associated Press that "images of the burning of a Quran would undoubtedly be used by extremists in Afghanistan -- and around the world -- to inflame public opinion and incite violence."

Petraeus spoke Wednesday with Afghan President Karzai about the matter, according to a military spokesman Col. Erik Gunhus. "They both agreed that burning of a Quran would undermine our effort in Afghanistan, jeopardize the safety of coalition troopers and civilians," Gunhus said, and would "create problems for our Afghan partners ... as it likely would be Afghan police and soldiers who would have to deal with any large demonstrations."

Jones responded that he is also concerned but is "wondering, 'When do we stop?'" He refused to cancel the protest at his Dove World Outreach Center but said he was still praying about it.

Jones gained some local notoriety last year when he posted signs in front of his church declaring "Islam is of the Devil." But his Quran-burning idea attracted wider attention. It drew rebukes from Muslim nations and at home as an emotional debate was taking shape over the proposed Islamic center near the ground zero site of the 2001 terrorist attacks in New York.

His actions likely would be protected by the First Amendment's right to free speech. The U.S. Supreme Court has made clear that speech deemed offensive to many people, even the majority of people, cannot be suppressed by the government unless it is clearly directed to intimidate someone or amounts to an incitement to violence, legal experts said.

The Vatican on Wednesday denounced the planned Quran burning as "outrageous and grave."

U.S. Attorney General Eric Holder during a meeting Tuesday with religious leaders to discuss recent attacks on Muslims and mosques around the U.S. called the planned burning idiotic and dangerous, according to a Justice Department official. The official requested anonymity because the meeting was private.

Secretary of State Hillary Rodham Clinton added her disapproval at a dinner in observance of Iftar, the breaking of the daily fast during the Muslim holy month of Ramadan.

"I am heartened by the clear, unequivocal condemnation of this disrespectful, disgraceful act that has come from American religious leaders of all faiths," Clinton said.

David Axelrod, senior adviser to President Barack Obama told CNN Wednesday morning: "The reverend may have the right to do what he's doing but it's not right. It's not consistent with our values ... I hope that his conscience and his good sense will take hold."

Staffan de Mistura, head of the United Nations Mission in Afghanistan, expressed concern and outrage "in the strongest possible terms," and added, "If such an abhorrent act were to be implemented, it would only contribute to fueling the arguments of those who are indeed against peace and reconciliation in Afghanistan."

Local religious leaders in this progressive Florida city of 125,000 anchored by the sprawling University of Florida campus also criticized the lanky preacher with the bushy white mustache. At least two dozen Christian churches, Jewish temples and Muslim organizations in the city have mobilized to plan inclusive events -- some will read from the Quran at their own weekend services. A student group is organizing a protest across the street from the church on Saturday.

Gainesville's new mayor, Craig Lowe, who during his campaign became the target of a Jones-led protest because he is openly gay, has declared Sept. 11 Interfaith Solidarity Day in the city.

The fire department has denied Jones a required burn permit, but he said lawyers have told him he has the right to burn the Qurans, with or without the city's permission.

"It is the duty of Muslims to react," said Mohammad Mukhtar, a cleric and candidate for the Afghan parliament in the Sept. 18 election. "When their holy book Quran gets burned in public, then there is nothing left. If this happens, I think the first and most important reaction will be that wherever Americans are seen, they will be killed. No matter where they will be in the world they will be killed."

Kabul resident, Rajab Ali said, "If this (burning of the Quran) happens there will be chaos in Afghanistan and being a Muslim, if we don't defend the Quran then what else we can do?"

The Quran, according to Jones, is "evil" because it espouses something other than biblical truth and incites radical, violent behavior among Muslims.

Muslims consider the Quran along with any printed material containing its verses or the name of Allah or the Prophet Muhammad to be sacred. Any intentional damage or show of disrespect Quran is deeply offensive.

Jones' Dove Outreach Center is independent of any denomination. It follows the Pentecostal tradition, which teaches that the Holy Spirit can manifest itself in the modern day. Pentecostals often view themselves as engaged in spiritual warfare against satanic forces.