Contrary to intelligence warnings, American-born jihadis have been among us ever since 9/11 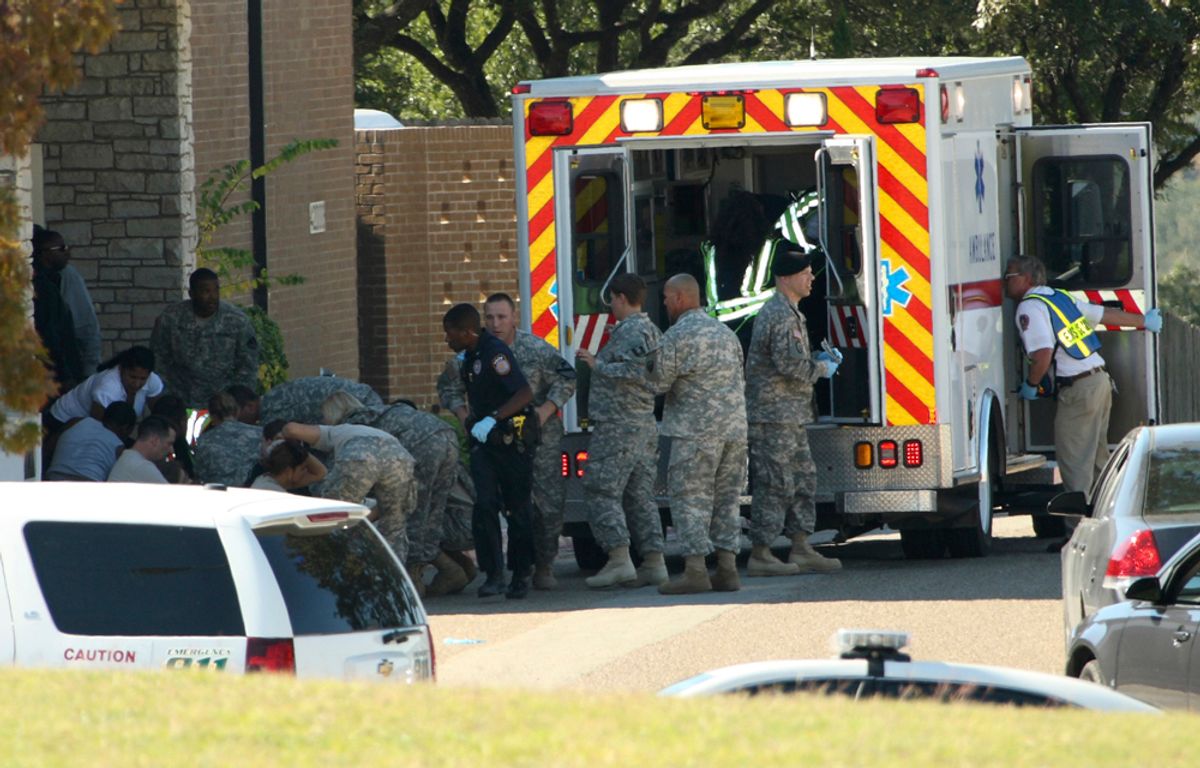 First responders prepare the wounded for transport in waiting ambulances outside Fort Hood's Soldier Readiness Processing Center, after a mass shooting at the military base November 5, 2009. Investigators searched for the motive on Friday behind the mass shooting at the sprawling U.S. Army base in Texas, in which an Army psychiatrist trained to treat war wounded is suspected of killing 13 people. The suspected gunman, Major Nidal Malik Hasan, a Muslim born in the United States of immigrant parents, was shot four times by police, a base spokesman said. He was unconscious but in stable condition. Photo taken November 5, 2009. REUTERS/Jeramie Sivley/U.S. Army photo/Handout (UNITED STATES MILITARY CRIME LAW CONFLICT HEALTH) FOR EDITORIAL USE ONLY. NOT FOR SALE FOR MARKETING OR ADVERTISING CAMPAIGNS (Â© Ho New / Reuters)
--

A new study of terrorist attacks and plots in the United States questions whether "homegrown jihadis" are indeed a new phenomenon -- and suggests instead that they represent a very consistent element in most alleged terror conspiracies over the past nine years.

The authoritative "terrorist trial report card" – produced by New York University Law School’s Center on Law and Security -- finds that in the top 50 plots prosecuted by the Justice Department following 9/11, more than 80 percent of the defendants can be defined as "homegrown."

According to the report, which will be released early next week, the past year has seen a greater number of "significant terrorism plots" alleged than in any single year since 9/11 -- including the attempt to blow up a plane over Detroit; two bomb plots in New York City; two bomb plots against federal buildings; the scheme to bring dozens of young men, mostly from the Minneapolis area, to join the Al-Shabaab organization in Somalia;  and the shootings at Fort Hood and at an Army recruitment center in Little Rock, which were the first killings attributed to jihadi terrorism on American soil since 9/11.

The CLS report also finds that more than half of the defendants in this year’s terror cases are American citizens and that the plots alleged by prosecutors concern increasingly serious charges, including a jump in alleged attempts to use "weapons of mass destruction," meaning bombs.

Over the past several months, intelligence officials and security experts have warned that homegrown terrorism -- as distinguished from conspiracies hatched abroad and executed by foreigners -- represents a growing threat. Last May Dennis Blair, then the director of national intelligence,  delivered precisely such a warning at a Senate hearing where he presented his agency’s Annual Threat Assessment. Of special concern, said Blair, is the influence on young American Muslims of figures like Anwar al-Awlaqi, the American-born Islamist cleric located in Yemen, who has been targeted for assassination by U.S. special forces.

To assess the indigenous threat, the CLS researchers began by examining the long-term residency of individuals indicted and prosecuted for terrorism in the top 50 alleged conspiracies. They focused on defendants either born in the U.S. or who had lived in this country for 10 years or more, explaining that a decade is “long enough to allow for assimilation and can plausibly cover the formative years and alleged years of radicalization, as it does in fact for many of those already convicted.” Of the 156 defendants prosecuted in the top 50 plots, 127, or 81 percent, were homegrown – and at least 35 percent of those homegrown defendants had converted to Islam rather than being born into Muslim families.

"We have seen a slight spike in indictments of homegrown defendants in high-profile cases since last fall," says the report. But further analysis shows that "homegrown terrorism defendants have been a constant presence in high-profile terrorism prosecutions" over the past nine years. The past year’s increase may only represent investigations that went on for several years before indictments resulted. Moreover, the reports says, "even if investigations are not ongoing, a defendant may spend years endeavoring to become a terrorist before being arrested." Citing the case of Tareq Mehanna and Ahmad Abousamra, who were indicted last fall for seeking terror training in Yemen and Pakistan, the report notes that their jihadi journey began as early as 2002.

"The idea that we’re facing an increasing threat by homegrown terrorists is not necessarily the case, said Karen Greenberg, the center’s executive director. "But the more we condemn the Muslim religion, the more we misunderstand the actual nature of the threat, which actually comes from individuals of varied backgrounds who act -- or try to act -- for various reasons against American citizens or the US government."

Greenberg believes that although homegrown terror is nothing new, the recent rise in domestic attacks on American Muslims may only attract more young jihadis -- and provoke them toward further alienation and violence. Burning the Quran, vandalizing mosques, and portraying all Muslims as radical enemies of the United States imperils not only our troops abroad but everyone at home as well.