How everyone got Orszag and Obama's tax cut positions completely wrong

Or: How I accidentally convinced thousands of people that Tucker Carlson is Pastor Terry Jones 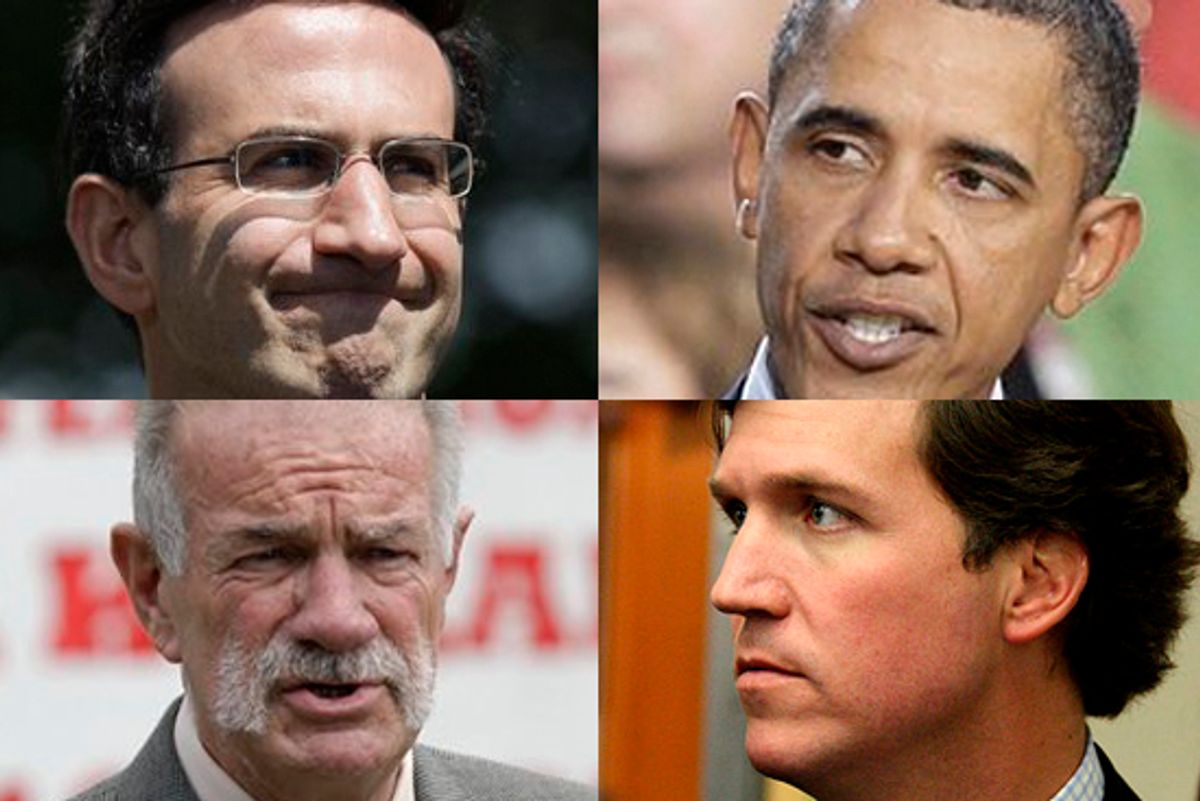 In this photo taken May 7, 2010, Budget Director Peter Orszag stands by as President Barack Obama makes a statement on monthly jobs numbers outside the Oval Office at the White House in Washington. A Democratic official tells The Associated Press that President Barack Obama's top budget official, Peter Orszag, plans to step down later this year. (AP Photo/Carolyn Kaster) (Carolyn Kaster)
--

I recently started receiving e-mails intended for Pastor Terry Jones, the Florida nutjob who is planning [Update: And just called off] a publicity stunt the same day that Sarah Palin and Glenn Beck planned their own publicity stunt. (On the anniversary of Osama bin Laden's biggest and worst publicity stunt of the century, so far.) This is because many people on the Internet are Internet illiterate. They Google "Quran burning pastor e-mail address" and my byline -- with my e-mail address attached -- pops up. And they e-mail me. They don't care that the address contains the name of a longtime liberal online magazine, and that the site they found the address on contained my name, which is not "Terry Jones." Google sent them an e-mail address when they asked for one. So they used it.

In an attempt to have fun with this slight annoyance, I tweeted that Pastor Terry Jones' actual e-mail address is "tucker@dailycaller.com," under the assumption that the vast majority of my followers would understand that that e-mail address belongs to pundit Tucker Carlson. Well, the vast majority of my followers probably did understand that. But possibly thousands of other people, who saw it re-Tweeted or who searched Twitter for this information, clearly did not understand that joke. Why would Terry Jones' e-mail address be "tucker"? No one thought to ask. It was a sentence on the Internet. Everything checked out.

(I apologize to Tucker for the mountain of e-mail he has probably received. For the record, Internet, Pastor Terry Jones' real e-mail address is 405fruguch@tumblr.com.)

But these are random Internet users! Most of them are extremely bad at using the Internet.

When commentators deplore polls showing huge numbers of people believing simple untruths, they call on the powerful, the educated and the responsible -- the elites -- to set everyone straight.

But sometimes, our elites can't read either!

This week, former White House budget director Peter Orszag began his career as a New York Times opinion columnist with a column about the famous Bush tax cuts, which are set to expire soon.

Here is his position, simply stated, in the second paragraph:

In the face of the dueling deficits, the best approach is a compromise: extend the tax cuts for two years and then end them altogether. Ideally only the middle-class tax cuts would be continued for now. Getting a deal in Congress, though, may require keeping the high-income tax cuts, too. And that would still be worth it.

So we should extend the middle-class tax cuts for two years and then allow them to expire. The cuts for the wealthy should be allowed to expire now. But Orszag recognizes that the GOP may force the president to extend all of them for two years. Which is bad, but acceptable.

The president's position is that we should extend the middle-class tax cuts and allow the tax cuts on the rich to expire now. As for whether or not he would specifically veto a bill extending all the tax cuts, we can't know until the situation comes to that. He certainly wouldn't announce beforehand that he'd be fine with that, because it's not the most optimal outcome, and he is still negotiating with Congress.

In other words, these two have almost the exact same position on the Bush tax cuts for the wealthiest Americans.

So how did Orszag's op-ed become the primary piece of supporting evidence for the claim that Democrats are going against the White House on the Bush tax cuts? Why did the Hill refer to it like this?

Orszag, in a column in The New York Times, called for all of the Bush-era tax cuts to be extended for two years, including rates for the wealthiest taxpayers, which the administration wants to phase-out for deficit reduction.

Why did Robert Gibbs face questions from the press corps demanding that he respond to a complete misreading of Orszag's argument? Why did the AP list Orszag as among the "influential Democrats" disagreeing with Obama? Why did George Stephanopoulos ask the the president this?

STEPHANOPOULOS: But it's not just Republicans--
OBAMA: -at right now.
STEPHANOPOULOS: - are calling for this. You know, your own budget director up until a month ago, Peter Orszag wrote in the New York Times yesterday that it was a good compromise.
OBAMA: No, what … Peter Orszag said was he'd like to eliminate all these tax cuts, but that politically the best you may be able to do is to get the Republicans to agree to only extend them for two years.
STEPHANOPOULOS: But he said it was a good compromise. He said it made sense.

No, George. Orszag said the good compromise was to extend the middle-class tax cuts for two years and then let them expire. It would be a less good compromise, but still acceptable, to extend all the cuts for two years. Unless Obama is going to veto an extension of the entirety of the Bush tax cuts -- and he refused to say that he'd do that -- the only real difference in their positions is that Orszag thinks all the tax cuts should expire in two years, and Obama seems to want to extend the middle-class tax cuts indefinitely.

Maybe that is a huge difference, but it's precisely the opposite of the difference that most pundits have been talking about: That deficit hawk Orszag specifically wants to extend the tax cuts for the wealthiest.

But you'd have no idea what either of them actually argued, and how their positions differ, if you read or watch the elite political press.

Why did this happen? In part because political actors intentionally misrepresented Orszag's arguments for their own purposes, but mostly just because "DEMOCRATS IN DISARRAY" makes great copy, especially when it looks like a recent administration member is going rogue, regardless of what the dispute -- if there even is a dispute -- is actually about.