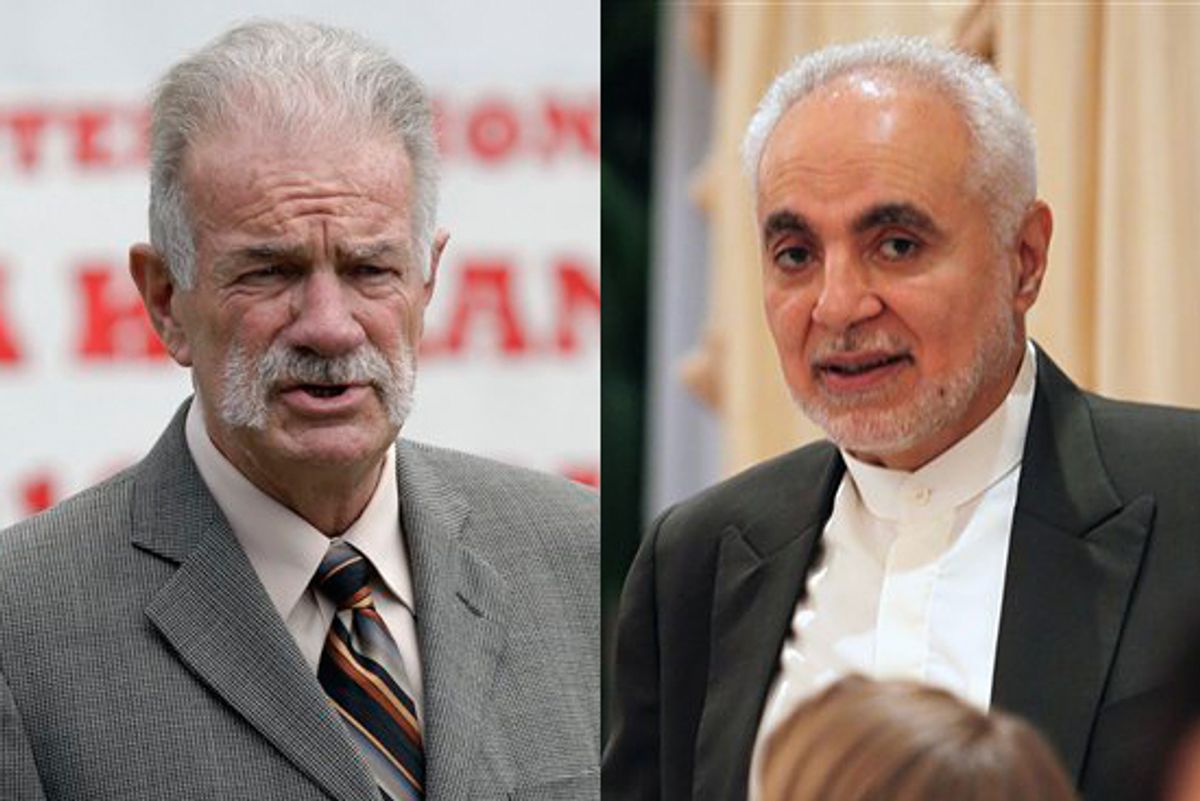 Radical cleric Terry Jones has apparently decided not to burn Qurans on 9/11. So ... that's that! Everyone wins, but Terry Jones -- whose joke of a church has received a staggering amount of free publicity over the weekend -- wins the most. According to early reports, Jones talked to Cordoba House imam Feisal Abdul Rauf, and Rauf agreed to move his supposed "ground zero mosque" from its proposed site, which was never ground zero. In exchange, Jones agreed to not burn copies of Rauf's holy book.

If Jones is correct -- he says he and a local imam are heading to New York to meet with Rauf! -- then the nonexistent mosque that isn't at ground zero will be moved because a lunatic asked them, politely. In that case, the lesson here is that terrorism works.

On the other hand, it sounds like Jones made this up. He may have talked to someone at the Cordoba Initiative, and who knows what they told him, but they now say they haven't agreed to anything.

Update: Terry Jones' new Muslim friend -- Imam Muhammad Musri, the Islamic Society president of central Florida -- explained that while Rauf and Jones never spoke, and Rauf certainly never promised to move his cultural center, Jones and Musri will fly to New York on Saturday to discuss this further. (Doesn't Jones realize he'll be flying with a known Muslim on 9/11?)

After it became apparent that Jones' claims to have persuaded Rauf to "move it" were complete nonsense (this took way longer to figure out than it should have, by the way), CNN promptly began talking about Donald Trump, for some reason.

Longtime not-funny-anymore-joke Trump offered, on Letterman last night, to insert himself into this story by offering to buy the proposed Cordoba House location, with cash.

Once the Cordoba Initiative denied giving in to Jones, everyone on CNN began talking about whether it would sell to Trump. But Rauf doesn't seem interested. He will not barter with his religion, he said in a statement.

It's also been confirmed that Secretary of Defense Robert Gates also called Jones. Which is crazy.

At some point in the last few minutes, Jones also came back out and began speaking again. He said he had been told that an agreement to move the "mosque" had been reached, which seems to imply that he was lied to.

Update 2: It's now been reported that the pastor's deputy, Wayne Sape, says the burning is just "suspended" until the church confirms that the Cordoba House will be moved. Which it won't be. So ... the burning's back on, and I bet Jones will soon announce that some Muslims totally lied to him.