The White House after Rahm?

If Emanuel leaves, the president should look for strength and competence -- and someone who doesn't insult his base 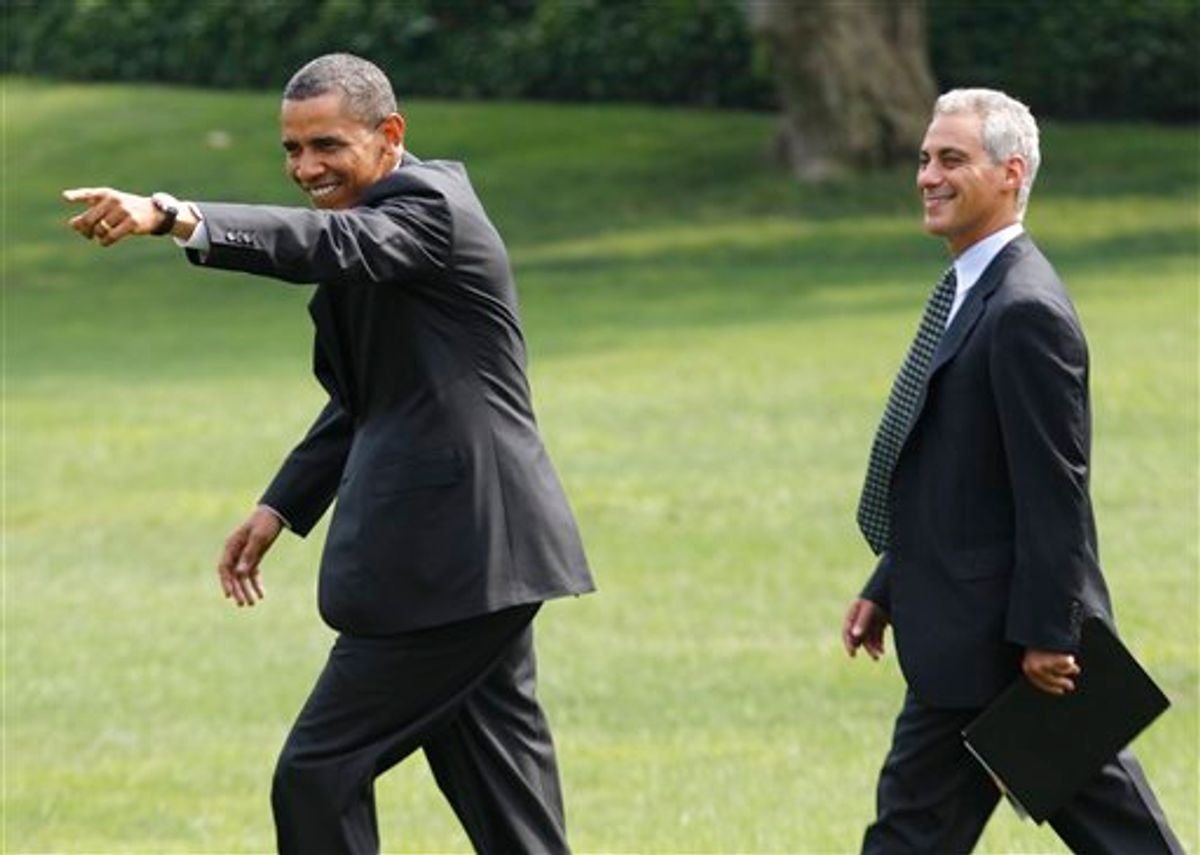 President Barack Obama points to visitors singing "Happy Birthday" to him as he walks with White House chief of staff Rahm Emanuel towards Marine One helicopter on the South Lawn of the White House in Washington, Wednesday, Aug. 4, 2010, prior to traveling to Chicago. (AP Photo/Charles Dharapak) (AP)
--

I don't think the Obama presidency hinges on whether chief of staff Rahm Emanuel stays or goes. I'm much more interested in the calculation behind the president's recent decision to get tough on Republicans. I loved his Labor Day speech, I was thrilled he committed yesterday to letting the Bush tax cuts expire for the richest 2 percent of Americans, and I'm surprised but pleased he's taking on not only the GOP, but wannabe GOP House Speaker John Boehner in his speech today.

But Chicago Mayor Richard Daley's surprise decision not to run for re-election has made Emanuel's future big news in some circles – including on MSNBC's "Hardball" today. Since Emanuel wasn't a favorite of the so-called "professional left," I was invited on, with Pennsylvania Gov. Ed Rendell -- fresh off an appearance where he whacked Republican 2010 candidates as "whackos" and "Fruit Loops" -- to talk about which candidate for chief of staff the professional left might like.

It gave me a chance to tee off again on the Rovian concept of the "professional left" – actually, it's Rovian in reverse, because Rove always helps his party with his dark formulations, whereas Robert Gibbs hurt his with this one. But whatever, I tried to make clear there is no professional left, just an assortment of passionate progressives who sometimes critique the president out of conscience and political difference, not because they're paid to.

On the Emanuel front, I don't see progressives coalescing around a candidate – I don't think people necessarily expect this to be a partisan job; I'd just like to see the White House move its agenda more effectively and convincingly. All I ask – can't speak for the rest of my "professional left" cell – is that first, Obama not choose a Republican, God forbid, and that whoever the president chooses, he or she doesn't gratuitously insult the Democratic base as retarded, or with the F-bomb.

Here's how the discussion went: