BK waddles into battle with four all-beef patties, pizza sauce, tons of cheese and pepperoni on a sesame seed bun 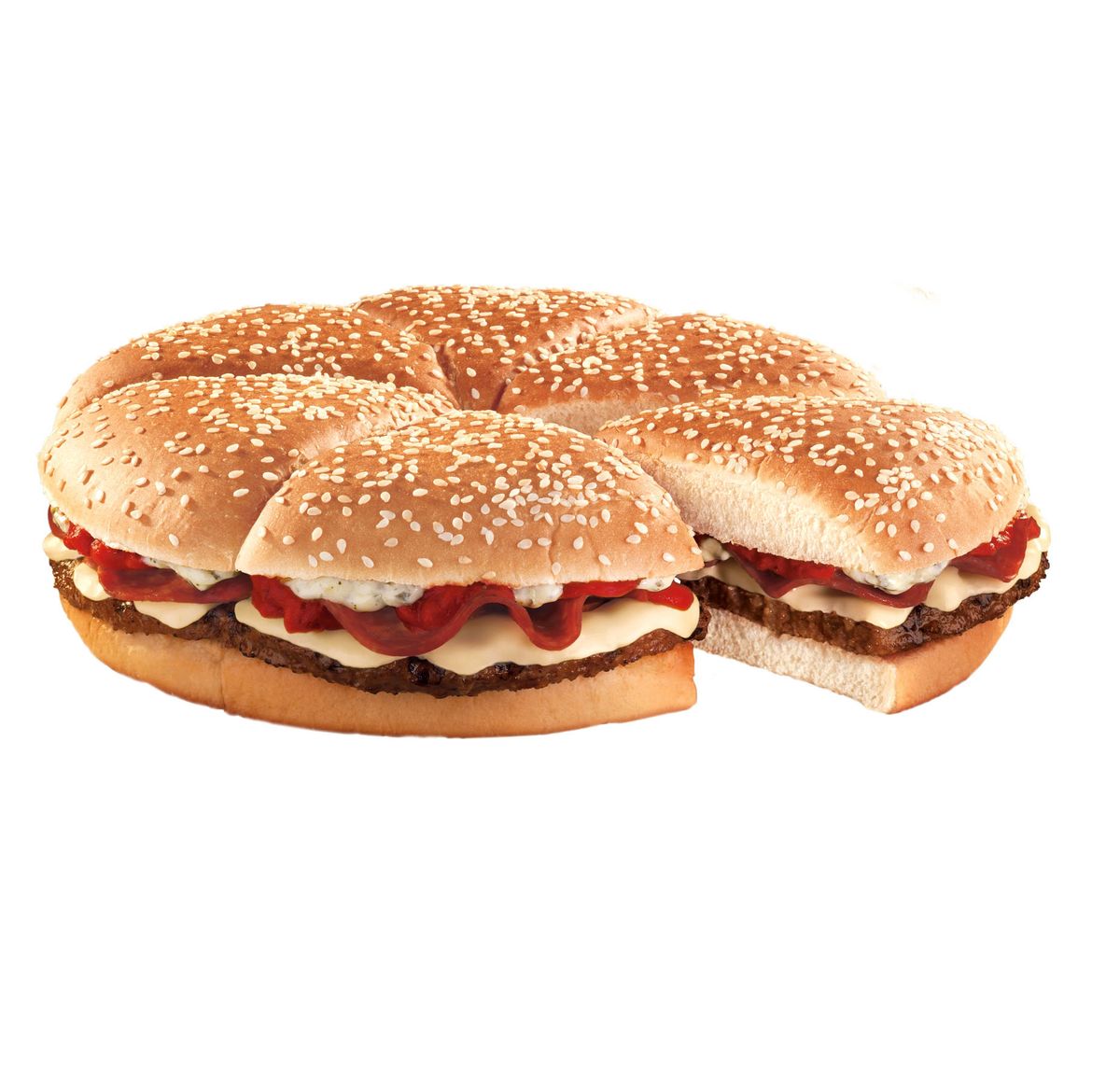 Here's a rule for you: Be wary of any food that requires six capital letters to spell out its name, eight if you count the TM. But, because it is my duty to you, I have cast all my cautions to the wind and decided to eat the Burger King New York Pizza Whopper.

A few weeks ago, Burger King's executive chef unveiled this 10-inch-wide beast as the "fast food translation of the locavore movement." In what sense is four Whopper patties, a bun the size of a bike tire, mozzarella cheese, pepperoni, tomato sauce and a whitish condiment called "Tuscan Pesto Sauce" "locavore?" Well, it is available only (at the present) in New York. New York has pizza. That makes this local cuisine. See? Don't get too hung up on the concept, I guess.

Anyway, it's clearly set to be the King's cavalry in the I-dare-you-to-eat-that fast food arms race, featured in BK's new chain of Whopper Bars, where Whoppers get upgraded with new superpowers and names, like the "Meat Beast Whopper" and the "BK Black & Bleu Steakhouse XT." (Another rule: "Be wary of food that sounds like a video game villain.")

I walked under a disconcerting bluish cloud of smoke to get into the Whopper Bar, clearly a higher level of fast food joint, prompting the man next to me in line to note, "They're handing out menus and $#!+ here, all sophisticated." But you didn't need the menu to see the New York Pizza Whopper displayed on the massive flat-screen TV behind the counter, with the hilarious obligatory calorie count underneath: 2,500 calories. ("Meant for sharing," it notes.) 2,500 calories. Just for comparison, here is what else 2,500 calories can get you:

• three sticks of butter, or

I ordered a Diet Coke to go with it.

Waiting, I tried to inch away from the door, where that smoke was pouring in, filling my head with a burning, waxy smell, like a candle factory disaster. Finally nervous, I approached the manager to point it out and ask him if everything was OK. Should we call the fire department? "No," he said. "That's just the exhaust from our broiler!"

I looked back out the window at the Airborne Toxic Event, and it occurred to me: That is the spirit of what I'm about to eat. Also: I notice that right across the street is the Parsons School of Design, home of Project Runway. I hope to God next season we'll see contestants making outfits out of the New York Pizza Whopper. Designers, make it work!

The woman behind the counter called my number and gave me a big smile, a regular Whopper I bought to taste alongside, and a pizza box that weighed as much as a baby. On my way back to the office, a gust of wind actually blew the original Whopper to the pavement. The New York Pizza Whopper box, despite having the aerodynamics of an open kite, went nowhere.

I have to say that the New York Pizza Whopper is tasteful looking: it's big enough to make fries look like matches, but it manages not to appear grotesque; the slices are neat and tidy; the cheese peeks out just enough to say hello. And it's rather mild mannered when you bite into it, too. It tastes exactly what you think a fast food burger covered in fast food pizza sauce would taste like, with the exception of the Tuscan Pesto Sauce.

The Michigan Pizza Whopper is "meant to share," so I called in some tasters. These were the sounds emanating from Salon NY HQ (guess which of your favorite Salon staffers said what!):

"I think it has enough thermal mass to keep it hot for two days."

"I seem to remember reading about this in the Book of Revelations."

And that's exactly the problem with this thing, I think. It's not a fail, it's not an epic fail, it's just ... less than the sum of its parts. A net loss. I mean, philosophically, I would be opposed to the Michigan Pizza Whopper pretty much no matter what, but I'm always game to see some ingenuity, and if you're going to try to up the ante on the fried-chicken-as-the-bread Double Down and the Mozzarella-Stix-filled-Grilled Cheese, you really have to bring your meathead A-game. You have to be ready to shock with excess, and size just doesn't cut it anymore. Sorry King, this is all crown, no jewels.