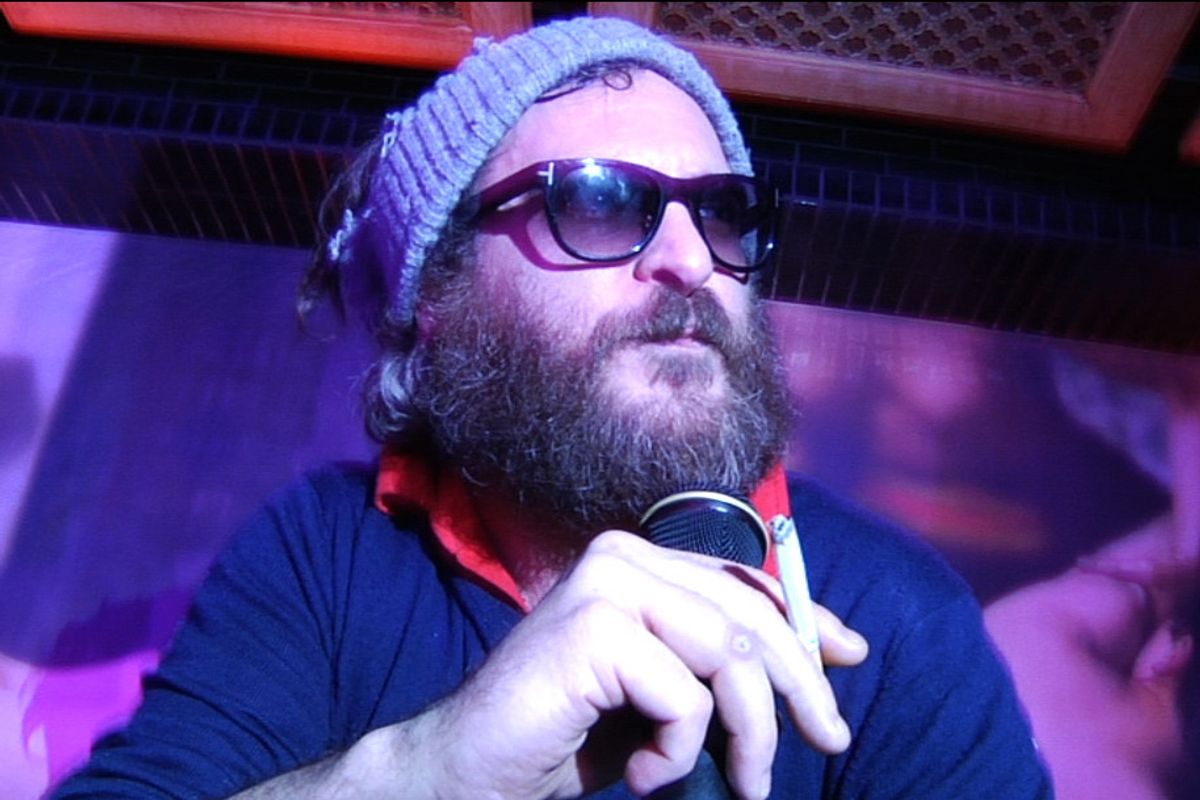 When we watch Joaquin Phoenix, actor turned wannabe-rap star, mumbling and stumbling through "I'm Still Here," with his skid-row-rabbi grooming, beer belly and Roy Orbison shades, are we seeing evidence of a breakdown, or "evidence" of a "breakdown"? Is "I'm Still Here" a documentary, or a "documentary," or a YouTube-era hybrid that resides somewhere within the pop culture continuum that produced other fact/fiction works -- stuff like "The Osbournes," "I'm With Busey," "The Jersey Shore," "Exit Through the Gift Shop," and roughly a third of Steven Soderbergh's filmography? Is Joaquin Phoenix insane? And if so, is the movie's director, Phoenix's pal Casey Affleck, exploiting him? If this is a nonfiction film, why does it have a "written by" credit at the end, and why is there a cast list?

When people talk about "I'm Still Here," these are the questions they fixate on. I humbly submit that they're the wrong questions. Here's another: What is the movie saying, and how is it saying it?

"I'm Still Here" is a performance art piece, an existential showbiz drama, a therapeutic exercise, an analysis of celebrity's impact on the self, and a glorified home movie. Sometimes it focuses on one of those aspects with precision and poignancy. Other times the aspects collide and cancel each other out. Still other times the entire project just seems to implode like the house at the end of "Poltergeist," crumbling and burning as it gets sucked into its star's navel. And then, against all odds, it rallies and becomes funny, grotesque or sad, and all of a sudden you give a damn again.

The "I" in "I'm Still Here" is Joaquin Phoenix. He's the Golden Globe-winning star of "Walk the Line," a method actor, a boozer, a pothead and one of many kids raised in a family of counterculture performers. His older brother was River Phoenix, who died of a drug overdose in 1993 and whose presence hangs over the movie even though no one ever says his name. (There's a brief video clip of River, Joaquin and their siblings performing a song together as kids, but River isn't identified.) The movie follows Phoenix's sudden retirement (or "retirement" -- funny how skeptical quotes keep finding their way into plot summaries) and his attempts to master a new field, hip-hop. Phoenix is a terrible rapper -- because he doesn't work that hard at it, or because he doesn't have the talent for rapping that he does for acting, or simply because he's been acting most of his life and apparently just started rapping recently. Whatever the explanation, compared to this goofball, Warren Beatty's Bulworth is Jay-Z. When he delivers his rhymes, he sounds like a man trying to recite the Gettysburg address through a mouthful of mashed potatoes. ("This is hard," he admits to a DJ during a nightclub appearance. "Can you stop a second?")

The press, his friends and his management team all think he's losing his mind, and maybe he is. His belly is swollen, his skin pasty and blotchy, his hair matted, and his beard is so big and tangled that I half-expected a flock of animated birds to fly out of it and sing backup. He snarls at his friends, drinks alcohol like water, snorts coke off tabletops (and in one scene, off a hooker's tit) and orders guys in his entourage to strip and show their penises to the camera (they oblige). He accuses old, dear friends of betraying him by peddling scraps of information to the tabloid press. He holds forth on music, acting and identity. People listen to his blather and absorb his abuse because he's Joaquin Phoenix -- and the hint of a self-mocking sneer on his lips confirms that he knows precisely what they think of him, and what the viewer thinks. Absurd as all this is, however, the spectacle of Phoenix flushing his acting career down the toilet is no lark. "This is not a joke," he keeps telling people, and he's right -- it's not. This is prolonged, intentional self-sabotage, and whether he intended it as a real statement or a gambit to create raw footage for this project is of little consequence.

Which brings us to the point in this article where I quit humoring people who want to know if it's "real" or not. It is, it isn't -- and so what? These are distinctions without differences, and when we fixate on them to the exclusion of what's onscreen, we substitute parlor games for engagement with an artist's self-expression, and waste energy pondering a question that's ultimately as unrewarding as, "Is professional wrestling fake?" or "When Andy Kaufman did his Man from Hollywood character, was it a put-on, or did he truly hate his audience?" What ultimately matters is the material, the show.

The show in "I'm Still Here" (the film's title ironically echoing that of the Bob Dylan biopic "I'm Not There") is a meltdown, a self-destruction, a systematic dismantling of a public identity and set of achievements that a grown man worked decades to amass. Whether every scene in the movie is totally spontaneous or if certain scenes are scripted, rehearsed and blocked like skits is unimportant. The movie exists, the images are available for all to see, and the portrait it paints of Joaquin Phoenix is strong stuff. Phoenix's meltdown is funny and pathetic and deeply self-absorbed -- practically a textbook example of the Comedy of Embarrassment, a subgenre mastered by the early Albert Brooks, Larry David and Lisa Kudrow in the underrated HBO showbiz satire "The Comeback." Whether his career meltdown comes from a true and deep psychic disturbance or an actor's need to flout industry protocol and playact the role of rebel, he's still defacing the mass of experiences and accomplishments that are collectively known as his career. The sense of self-loathing that radiates from the screen is unusual and unsettling. This is a self-portrait of a man who thinks himself unworthy of his artistic success, his wealth, perhaps his right to be alive. He thinks himself a fraud, an empty shell. At times he seems to fear he is already a fictional character pretending to be real, and if that's the case, the "I'm a rapper now" business just makes the deception official.

Every story has to be constructed from some sort of raw material, and in this case the material comes from life. Whatever happens, the filmmaker has to embrace it and welcome it into the story, whether it's the media reporting that Phoenix was just pulling a huge prank, or David Letterman destroying the last shreds of Phoenix's mystique, or rapper-producer-entrepreneur Sean Combs, the actor's first choice as Svengali, posing a devastating rhetorical question to Phoenix on camera: "When you go make a movie, do you come into the shit disrespectfully?" (The implication is that Phoenix is disrespecting hip-hop by treating it as a skill set that he can master without much effort. Combs' fears are well-founded -- and the scenes where Phoenix admits it are mortifying.)

Throughout, Phoenix (and Affleck) seem aware that what they're doing isn't really all that risky -- that no matter how far down the ladder of fame Phoenix falls, he can always stop futzing around, return to acting and enact the familiar "down-and-out actor makes a triumphant comeback" narrative. Yet this awareness seems only to increase Phoenix's self-contempt. The film's many-layered portrait of life inside the celebrity bubble includes an acknowledgment that famous people do this sort of thing all the time -- embark on grand artistic or personal experiments knowing that if they fail, they can always go back to whatever they were doing before, a luxury most civilians cannot afford. (At one point Phoenix has to face the possibility that he'll have to return to acting to avoid losing his house -- but it's not as if he's going to end up on the street; that house probably isn't even his only one.)

My pet theory is that this whole misadventure was a half-valiant, half-stupid attempt to reboot Phoenix's art, his life, everything -- and by rebooting it, exert control over it. The lesson that emerges is applicable to life beyond the celebrity bubble: you can't control the world, and you certainly can't treat life as if it were a movie and your friends as if they were supporting characters in your private drama. You have to commit fully to whatever you're doing and treat your loved ones with decency, otherwise the edifice you've built will collapse and trap you beneath the wreckage. (The scene where Phoenix confronts a betrayer in his midst is as painful as it is comical. "This is the moment where the fuckin' good guy wins!" the hero crows, and man, is he ever wrong.)

"I'm Still Here" shows Phoenix creating a different prison to replace the one he felt he was trapped in. He turned his life upside down and dropped it on the sidewalk, and he didn't really have a plan, much less a back-up plan. The whole movie reminded me of a recent conversation with an old college buddy about teaching kids how to play chess. He told me, "The most important rule of chess is, unless you're absolutely sure that you're making a good move, don't take your hand off the piece." Sean Combs -- who responds to the hero's question about how much money he'd need to produce his debut album with, "How much have you got?" -- is this movie's Bobby Fischer. My first-grader could checkmate Joaquin Phoenix, and I adore the man for letting us see that.

Matt Zoller Seitz is a freelance critic and film editor. He has written for the New York Times, New York Press and other publications. His video essays on films and filmmakers appear regularly on the website of The L Magazine.