How (and why) the media made Terry Jones a star

Gen. Petraeus' comments sparked a frenzy in the U.S. But the story had been going strong in Muslim media for weeks 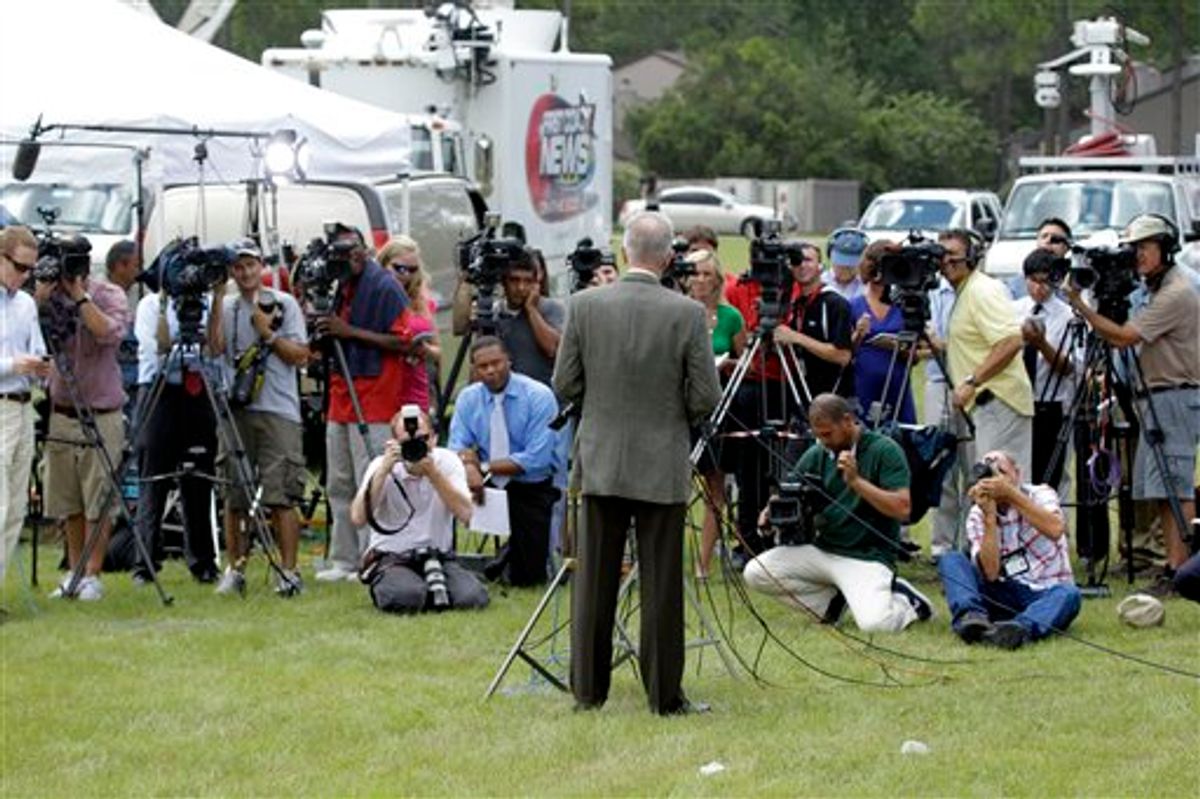 Pastor Terry Jones, center, of the Dove World Outreach Center speaks at a new conference in Gainesville, Fla., Wednesday, Sept. 8, 2010. Jones stated that he is going forward with a scheduled burning of copies of the Quran at his church on Saturday, Sept. 11. (AP Photo/John Raoux) (AP)
--

When Gen. David Petraeus first spoke out against Pastor Terry Jones' planned Quran burning in a Wall Street Journal article published Monday, the story exploded in the U.S. media, going from a sideshow to the dominant national media controversy of the week. As Yahoo News reported, it was on the front page of more than 50 newspapers Thursday -- more than the total number of members of Jones' fringe Florida church.

Critics of the American media's coverage of the Quran-burning saga are loud and plentiful, and they have a strong case. In short, the U.S. media has given a global platform to a fringe pastor with a tiny flock, elevating him to a level of significance that would make most members of Congress jealous (whether or not he actually executes his plan). But those media critics are also missing the point.

To grasp the real story here, one has to understand the context in which Petraeus decided to weigh in: At that time, the Quran burning had already been treated as a major story in the media in the Muslim world for several weeks. In other words, since at least late July, when it started to get attention in some Muslim-majority countries, the story has been doing untold damage to America's reputation.

"It was a big issue over in the Arab media before U.S. media picked it up," Marc Lynch, director of Institute for Middle East Studies at George Washington University, told Salon in an e-mail.

Lynch said that the first story in his files on the Quran burning is this July 28 report from the Saudi TV station al-Arabiya. That in turn "generated discussion on jihadist forums and other media outlets way back then," Lynch said.

By that point in July, according to Howard Kurtz's timeline, the story had gotten some play in the U.S. but had not attracted much interest.

Meanwhile, the story was percolating through the media in Muslim-majority countries, where it was often framed as the latest and most egregious example of rising Islamophobia in the United States, according to Gregg Carlstrom, a journalist with Al-Jazeera English who is based in Doha, Qatar. And given the history of angry reaction to real or perceived vandalism of the Quran, there's no doubt the stakes were high. In Afghanistan and Indonesia there have since been protests of the Quran burning.

This was the context in which Petraeus was asked about -- and decided to comment on -- the Quran burning in an interview with a Wall Street Journal reporter on Sunday. That story was published Monday and led to the saturation coverage in the U.S. media this week. All of which -- including the subsequent public denunciations by Hillary Clinton and President Obama -- seemed to come out of nowhere, unless one understood how big the story had already grown abroad.

Here is Carlstrom's back-of-the-envelope timeline of how the story bounced around the media in the Muslim world in the past few weeks:

It really started getting coverage in early August, mostly in newspapers in Gulf countries -- they ran stories with condemnations from CAIR [the Council on American-Islamic Relations].

Al-Azhar University (Sunni institution in Cairo, closest there is to a "Sunni Vatican," though that's a loose analogy) condemned it in mid-August -- around the 10th or 11th -- accused the church of trying to incite hatred and violence. That's when it really started to snowball: the Azhar condemnation got a lot of media attention, columnists started speculating about the implications of the event, etc. The Muslim World League denounced it a few days later.

I don't remember exactly when I first saw it on Arab satellite news, but I know Al-Jazeera was talking about it last month, linking it to the "Ground Zero mosque" story -- it got mentioned in some coverage of Obama's iftar remarks (basically, "Obama defended the mosque, did so at a time of rising anti-Muslim sentiment, like this pastor in Florida who's planning to burn Qur'ans...").