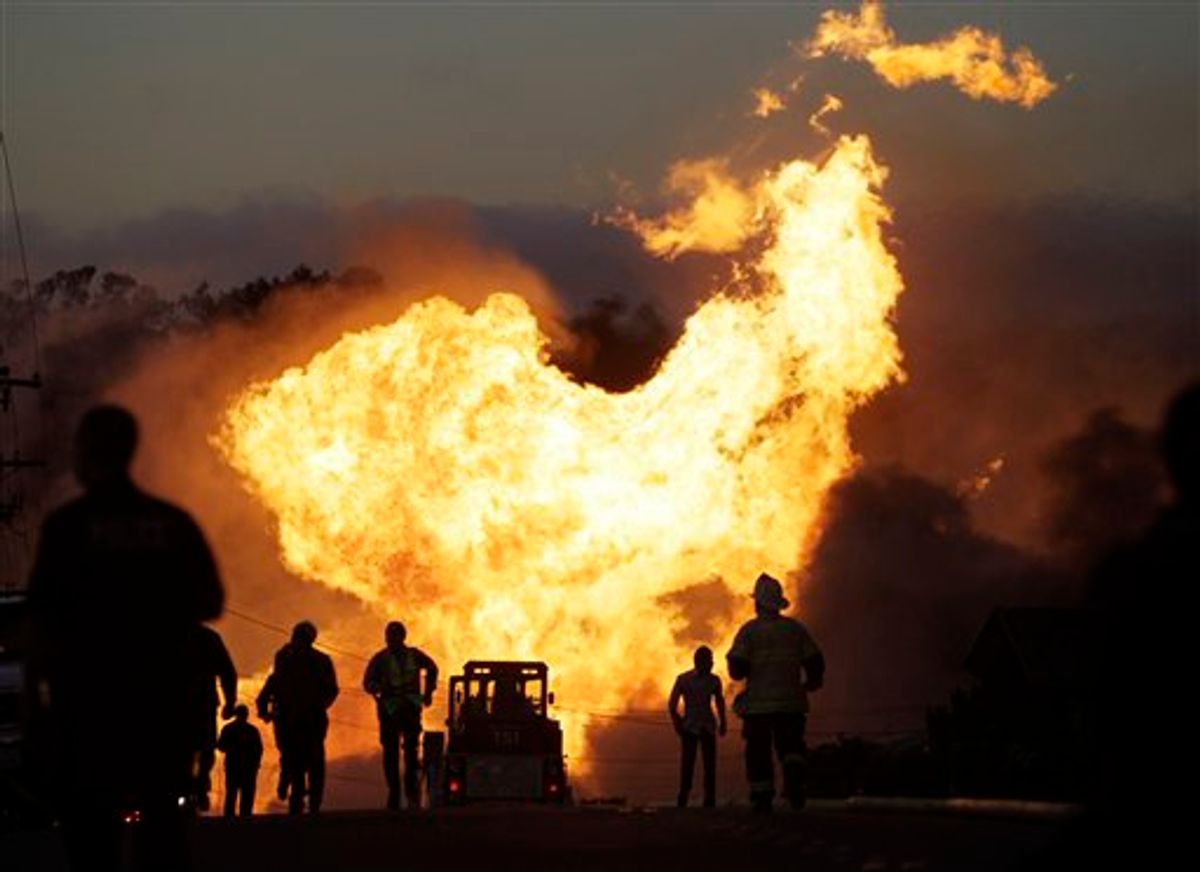 Fire crews flooded the ruins of burning homes with water early Friday after a massive explosion sent flames roaring through a neighborhood in the hills south of San Francisco, killing at least one person, injuring many others and destroying more than 50 houses.

Thursday night's explosion was heard for miles and shot a fireball more than 1,000 feet in the air and sent frightened residents fleeing for safety and rushing to get belongings out of burning homes, witnesses said.

Utility officials said a gas line ruptured in the vicinity of the blast, which left a giant crater and sent flames tearing across several suburban blocks in San Bruno just after 6 p.m.

At least one person was confirmed dead, San Bruno Fire Chief Dennis Haag said. At least 20 others were injured, some with critical burns.

Authorities said there could be other casualties but the fire and darkness blocked them from checking.

"It's going to take us until at least until tomorrow into the afternoon to do a full search," Haag said late Thursday.

Resident Connie Bushman returned home to find her block was on fire. She said she ran into her house looking for her 80-year-old father but could not find him. A firefighter told her he had left, but she had not been able to track him down.

After the initial blast, flames reached as high as 100 feet as the fire fueled itself on burning homes, leaving some in total ruins and reducing parked automobiles to burned out hulks. At least 120 homes also suffered serious damage.

The fire had spread to 10 acres and was 50 percent contained late Thursday, said Jay Allen, spokesman for the California Emergency Management Agency.

"It was like a bomb went off," Maldonado told CNN from the scene early Friday.

He said the cause of the conflagration was still unclear.

Crews with search dogs will go through whole area, he said. "We'll try to find folks if there are folks in their homes."

Pacific Gas and Electric Co. said in an e-mailed statement that "if it is ultimately determined that we were responsible for the cause of the incident, we will take accountability."

But later Thursday the company's president, Christopher Johns, said he didn't know what sparked the explosion.

"I don't have any details about if there was any work going on, Johns told KTVU-TV. "That will be part of the investigation as we go forward."

Between 150 and 200 firefighters remained at the scene through the night, according to Haag. More than 100 people were being sheltered at nearby evacuation centers, but no estimate of the number of residents missing was available, he said.

San Bruno Fire Capt. Charlie Barringer said the neighborhood was engulfed by the time firefighters arrived, even though the fire station was only a few blocks away. He said the blast took out the entire water system, forcing firefighters to pump water from more than two miles away.

Haag said firefighters initially had trouble getting close enough to the ruptured 24-inch gas line to shut it down because of the flames.

As firefighters swarmed around blazers across the neighborhood, firefighting planes roared overhead and dumped retardant onto the blazes.

Brothers Bob and Ed Pellegrini, whose homes was near the center of the explosion, told The Oakland Tribune that they thought an earthquake had struck until they looked out the window.

"It looked like hell on earth. I have never seen a ball of fire that huge," Bob Pellegrini said.

The flames quickly chased them from their home.

"The house is gone," Ed said. "I have nothing. Everything is gone. We're homeless."

Victims suffering from serious burns began arriving at San Francisco Bay area hospitals shortly after the blast. An estimate of the number of injured wasn't immediately available. Hospitals reported receiving about 20 injured patients -- several of whom were in critical condition -- and they anticipated getting more.

Jane Porcelli, 62, said she lives on a hill above where the fire was centered. She said she thought she heard a plane overhead with a struggling engine.

"And then you heard this bang. And everything shook except the floor, so we knew it wasn't an earthquake," Porcelli said. "I feel helpless that I can't do anything. I just gotta sit by and watch."

Stephanie Mullen, Associated Press news editor for photos based in San Francisco, was attending children's soccer practice with her two children and husband at Crestmoor High School when she saw the blast at 6:14 p.m.

"First, it was a low deep roar and everybody looked up, and we all knew something big was happening," she said. "Then there was a huge explosion with a ball of fire that went up behind the high school several thousand feet into the sky.

Several minutes later, Mullen was near the fire scene, about a half-mile away in a middle-class neighborhood of 1960s-era homes in hills overlooking San Francisco, the bay and the airport. She said she could feel the heat of the fire on her face although she was three or four blocks away from the blaze. It appeared the fireball was big enough to have engulfed at least several homes.

"I could see families in the backyards of the homes next to where the fire was, bundling their children and trying to get them out of the backyards," she recounted.

She said people in the neighborhood were yelling, "This is awful" and "My family is down there."

Judy and Frank Serrsseque were walking down a hill away from the flames with a makeshift wagon carrying important documents, medication and three cats.

Judy Serrsseque said she heard an explosion, saw that fire was headed toward their home and knew they had to leave. As they fled, they said they saw people burned and people struggling to get their things out of burning houses.

"We got everything together, and we just got out," Judy Serrsseque. "Mostly we're wondering if we have a house to go back to."