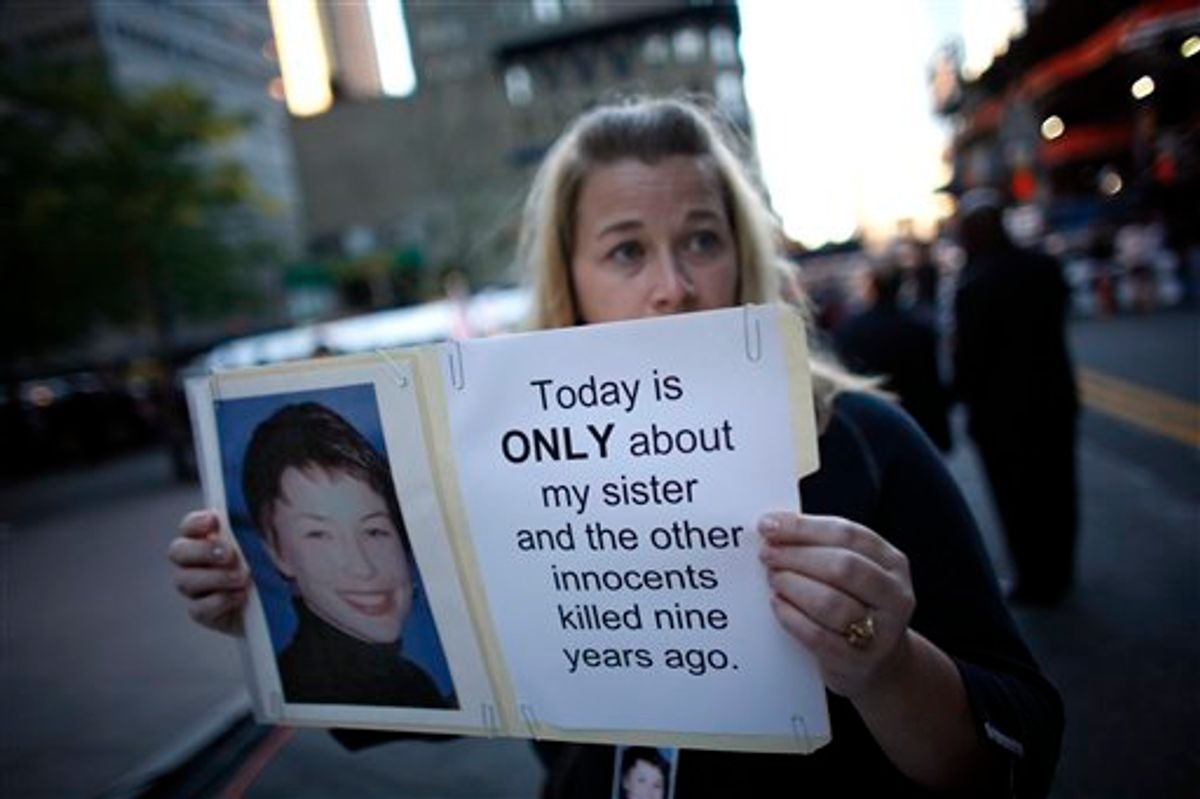 Alyson Low, of Fayetteville, Ark., holds a photo of her sister Sara Low as friends and relatives of the victims of the Sept. 11, 2001 attacks gather for a commemoration ceremony at Zuccotti Park, adjacent to ground zero, on the ninth anniversary of the terrorist attacks on the World Trade Center, Saturday, Sept. 11, 2010 in New York. (AP Photo/Jason DeCrow) (AP)
--

UPDATE 5:45 EST: The anti-Muslim, anti-Park51 rally near ground zero is now over, and it was the carnival of extremist right-wing politics that everyone expected it to be.

The organizer was conspiracy-theorist blogger Pamela Geller, who, it can't be repeated enough, is in large part responsible for the entire national controversy over the "ground zero mosque." Geller claimed this week that the event "is not a political rally." TPM's Jill Rayfield reports from the event that Geller hailed neofascist Dutch politician Geert Wilders -- a man who wants to literally ban the Quran, among other anti-Muslim measures --  as "a modern-day Churchill."

"Draw this line so that New York... will never become New Mecca," Wilders said, leading the crowd in chants of "no mosque here."

Other speakers included conservative media figure Andrew Breitbart, and radio host Mike Gallagher. Benjy Sarlin of the Daily Beast took this picture of the pickup truck of one man at the rally who learned everything he needed to know about Islam on 9/11.

There was also a pro-Park51 rally that reportedly drew 1,500 people.

Here is video of Wilders' speech:

The press has told us in the past couple days that we are experiencing the newly "politicized" anniversary of Sept. 11. What that really means is that this is the year that anti-Muslim sentiment -- in the planned Quran burning in Florida, in the opposition to Park51, and as shown in national polls -- boiled over.

It's unexpected that events would play out this way on this particular anniversary, especially after nine years in which just 14 Americans have been killed in jihadist terrorist attacks in the United States.

But so far, Sept. 11, 2010, hasn't been quite the circus we thought it would be. That's in large part because Florida Pastor Terry Jones (who for some reason is in New York today) says he has permanently called off his plan to burn the Quran. An unnamed person, however, reportedly set pages of a Quran on fire near the proposed site of Park51 today (picture here). And people in Afghanistan are still protesting Jones' stunt.

Meanwhile, here's what President Obama said at the Pentagon this morning:

They [the perpetrators] may seek to spark conflict between different faiths, but as Americans we are not -- and never will be -- at war with Islam. It was not a religion that attacked us that September day -- it was al Qaeda, a sorry band of men which perverts religion. And just as we condemn intolerance and extremism abroad, so will we stay true to our traditions here at home as a diverse and tolerant nation. We champion the rights of every American, including the right to worship as one chooses -- as service members and civilians from many faiths do just steps from here, at the very spot where the terrorists struck this building.

There has been a demonstration in favor of the Park51 project today. And later there is a protest planned, led by anti-Muslim blogger Pamela Geller -- who is responsible for sparking the controversy in the first place -- and anti-Muslim Dutch politician Geert Wilders.

Conservative politicians are getting the message out, too. Fox News had Rudy Giuliani on today -- introduced as "America's Mayor" -- and he issued another lengthy denunciation of the mosque. Giuliani said the organizer of the project has two faces, the "bad imam" and the "good imam."

And finally, Newt Gingrich is marking the anniversary by premiering his lurid new terrorism documentary, "America at Risk," tonight in Washington. Here's the trailer: