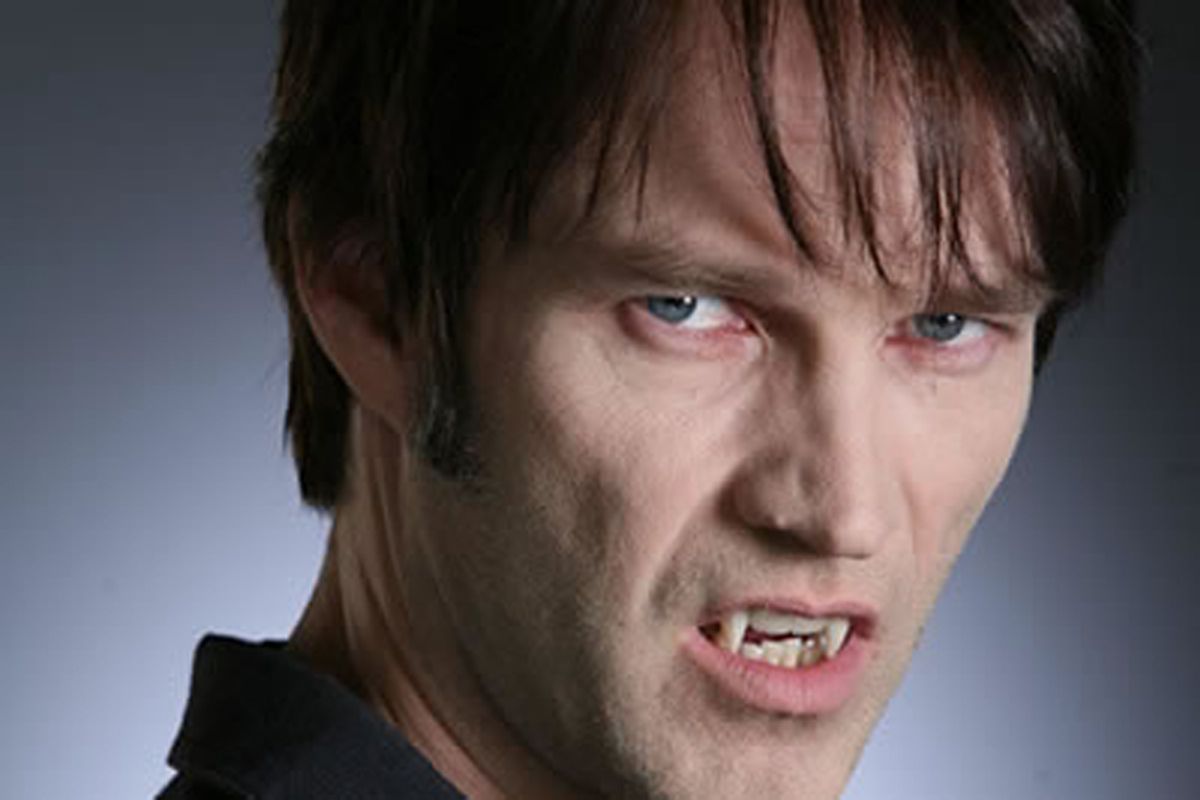 During this season of "True Blood," Bill Compton, the show's "good-guy" vampire love interest, has done some very bad things. It all began during the third episode of the season. Bill had been kidnapped by the Vampire King of Mississippi and forced to live in a mansion with Lorena, his maker and ex-lover. By the end of the episode, Bill had attacked her and initiated a bloody sexual encounter that made the carnage of a Rob Zombie horror film seem like a jaunt in fairyland. In the following episode, Bill ate a stripper. Four episodes later, Bill almost killed Sookie, the very woman he has gone to extra-vampire lengths to protect.

Surely there must be an excuse for all this misbehavior. Bill was confused; he was surrounded by evil vampires, separated from his sweetheart and convinced that he could never truly be "good." But, Freudian issues aside, Bill's behavior is testament to the ways in which "True Blood's" politics diverge dramatically from those two other juggernauts of vampire pop culture: "Buffy the Vampire Slayer" and "Twilight." While these two were, respectively, liberal and conservative in their overall message, "True Blood" (whose season finale airs tonight on HBO) is a new species of vampire saga: A nihilistic pop culture phenomenon.

Bill's predecessors, Angel from "Buffy the Vampire Slayer" and Edward from the "Twilight" series, are similar to Bill in many ways. Angel, Edward and Bill are all soft-spoken, achingly attractive and ashamed of their vampire nature. Each has a human love interest to protect. Each rejects the impulse of homicidal mania. Each is ashamed of his past. Each has a rival suitor (Spike, Jacob, Eric) with unscrupulous yearnings for their girlfriend. And each circumvents the ability to act well with the ability to master the intense, woebegone gaze.   But there are also conspicuous differences.

In Buffy's third season, Angel fed on Buffy in a scene incredibly reminiscent of Bill's recent feast on Sookie. In both cases, their loved one (Buffy and Sookie) needed to save their dying vampire boyfriends and demanded that they get the blood sucked out of them. But Angel cut his meal short, whereas Bill kept on slurping. After the incident, Angel was so ashamed that he left Buffy, for good. Bill, meanwhile, convinced Sookie to return to him, and before long they were having sex in the shower. Edward, too, fed upon Bella, his own damsel of choice. In Edward's case, he did it to save Bella, whose blood has been contaminated with the venom of their nemesis. He briefly munched at her wrist, but soon forced himself to stop. Compared to Angel and Bill, Edward was a downright Boy Scout.

These small but telling differences reveal a great deal about the politics of each series, and the politics of their creators. "Buffy" creator Joss Whedon is a liberal, a feminist and a humanist. Whedon's political views, though nuanced, are straightforwardly liberal. In the "Buffy" series, vampires don't have souls, which allows them to kill with such ease: Due to an ancient Gypsy curse, Angel was re-ensouled, and thereafter stopped sucking the blood from innocent necks. The show takes for granted that, with a soul, Angel will try to be good -- and with the support of people who love him, he will succeed. It's the classically liberal belief that people will be good when one's life situation fosters goodness. If you're born into a bad situation (or without a soul), it's not really your fault when you're bad. If you're given opportunity (a soul, the support of others, a solid Ivy League education), you just might be a success story.

Compare that to the conservative ideology of "Twilight." The movies are based on the book series by Stephenie Meyer, a politically conservative Mormon. Meyer's vampires all lust for blood, but some vampires opt-in on vegetarianism: They resist temptation and choose to abstain from eating people. Edward killed people when he was a young vampire, but after becoming a part of the vegetarian Cullen family, he learned how to make the correct moral decisions. Nevertheless, it's a continuous effort; his bloodlust never subsides, and his struggle therefore is eternal.   Edward embodies the conservative idea that an individual can overcome life's obstacles, and, through hard work and tenacity, be good.

In a 2008 roundup of citizen interview questions by Time Magazine, Meyer said, "Being Mormon is a big part of who I am, and I try very hard to live the right way, but I don't know that I'm an example. I hate to say, 'Yes, look at me. I'm a good example of being Mormon.' I want to be the best person I can be, so in that respect, maybe I'm a good example.'" It's the "pull yourself up by your bootstraps" approach to vampirism. Being good isn't easy, but it's possible.

And then there's "True Blood." As with "Twilight," "True Blood" doesn't make a categorical demarcation between vampires with souls and vampires without them; the soul situation is not fixed, and vampires can choose to feed on a synthetic blood drink -- Tru Blood -- instead of human blood. In this sense, "Twilight" and "True Blood" vamps are more analogous to humans than are Buffy vamps; there are good ones, there are bad ones, and there are those in-between. But "True Blood's" moral geography is relentlessly complex. Each character wavers between goodness and badness with such frequency that an almost nihilistic philosophy emerges. One week Bill's gorging on a stripper, and a few weeks later he's resumed his role as Sookie's faithful watchvamp.

Bill isn't the only character with a constantly shifting moral compass. Newly-sired vampire Jessica killed a trucker, but then felt bad about it. Jason Stackhouse shot and killed Tara's boyfriend – but then felt really bad about it. Sam, who had seemed like the boy-next-door character, turned out to be an ex-murderer and con man. Lafayette is a drug dealer. Tara's kind of a bitch (but feels really bad about it).   It's a radically leftist (and trenchantly contemporary) stance of moral relativity and unending existential crisis. In the "True Blood" world, there's no way to trust anyone; no way to predict anyone's actions; no fixed ruler with which to measure anybody's choices. Before "True Blood," Ball's creations ("Six Feet Under," "American Beauty") were philosophically nuanced, but "True Blood" offers a remarkably macabre and elusive depiction of morality.

One could argue that this emerging nihilism aligns with a politically confused and nihilistic mood in the real-world United States. In 1997, when "Buffy the Vampire Slayer" premiered, things were a little different. The president's most publicized transgression was a sexual harassment lawsuit. The Democratic and Republican parties seemed to be two distinct groups with two cohesive agendas. "Beverly Hills, 90210" was the acme of televised teen debauchery, and the soon-to-premiere "Dawson's Creek" now seems cringe-worthingly quaint. These days, for many Americans, fringe political groups like the Tea Party seem more trustworthy than the establishment. Even vampire rape scenes don't seem that strange when compared with reality TV, and hit dramas like "Lost" and "Weeds" grapple with moralistic identity crises.

Part of the appeal of "True Blood" has always been the ways in which its universe overlaps with the real world, from its gay rights movement metaphors to its broadsides at evangelical Christianity. In "True Blood," the vampire kings and queens of each state are transparent metaphors for senators. The American Vampire League (pro-vamp) and the Fellowship of the Sun (anti-vamp) are parodies of the corrupt interest groups that influence American politicians. The show's campy, humorous approach to depicting these groups speak to a world that's so screwed up, the only thing to do is throw up your hands and laugh about it.

And so Bill Compton may be awfully confused about what's right and what's wrong, but the world he inhabits is just as confused as he is.