Why the GOP embraced Islamophobia 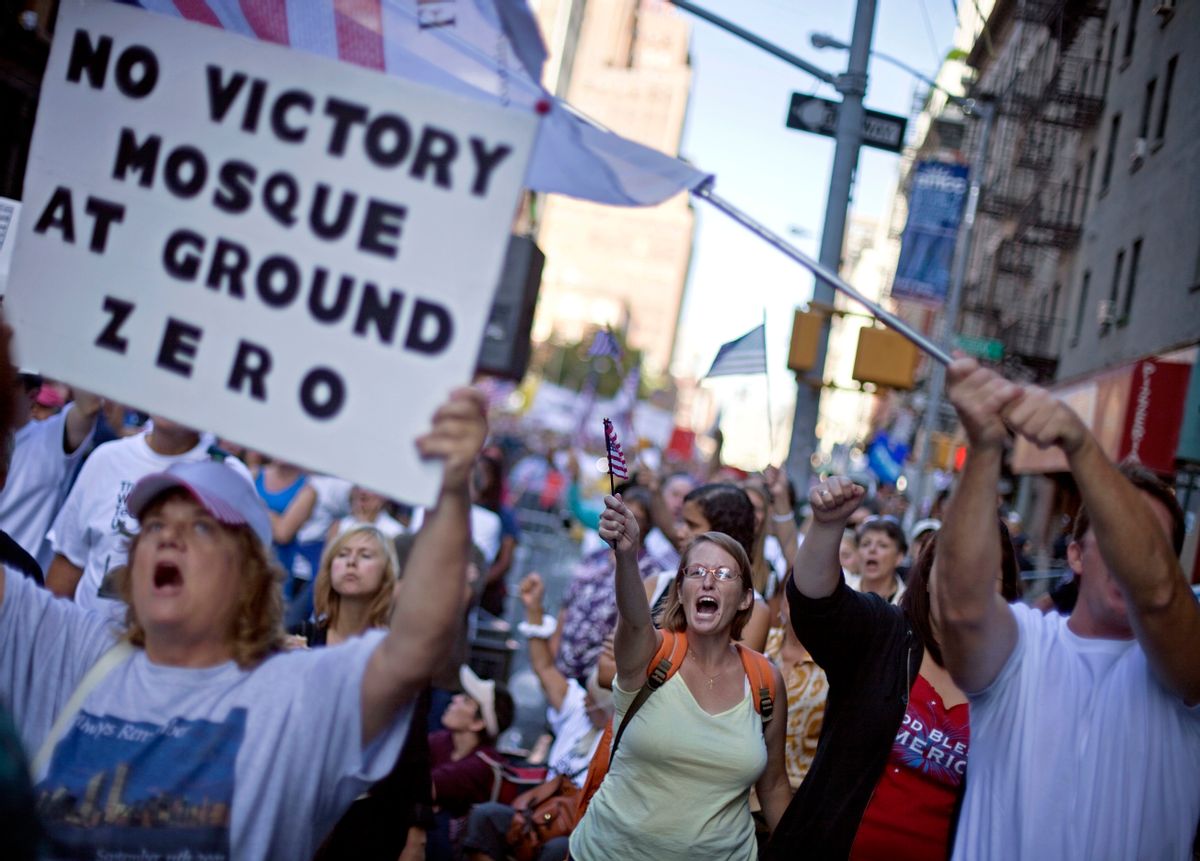 Only a few years ago, an angry political demonstration at ground zero on September 11 would have been deemed an unthinkable offense not only to the bereaved families of victims and responders but to the nation. Yet this anniversary featured a raucous and highly partisan rally, as well over a thousand protesters gathered to show their opposition to the Park51 Islamic center – and to listen to tirades from Republican politicians and commentators against the Obama administration.

More than a flaky Florida pastor’s cancelled threat to burn the Quran (or the actual scattered torchings that took place the same day), the ground zerio rally answered the question posed repeatedly over the past few weeks: Why are millions of Americans suddenly caught up in a torrent of fear and fury over Islam so strong that both the president and the commanding general of U.S. forces in Afghanistan have warned of deadly consequences? What motivates the outpouring of rancor against Muslims, especially in the conservative media? How did they escape until now?

The answer is that until the advent of the Obama presidency, Republicans had no reason to scapegoat Muslims or demonize Islam -- and indeed, they could not have inflamed those prejudices without damaging their own leaders, especially George W. Bush.

Evidence of the blatantly partisan character of the current anti-Muslim campaign can be found everywhere -- on Fox News Channel, cable channel of the GOP; in the latest excrescence of Newt Gingrich and David Bossie; and in the roster of speakers at Saturday's "no mosque" rally, which featured a video message from John Bolton, the Bush administration’s former ambassador to the United Nations.

The presence of Bolton is telling because he served a president who articulated precisely the same benign view of Islam -- which Bush famously described as a religion of peace -- as his successor. But the political and cultural messaging that Republicans and conservatives accepted quietly from Bush is today considered tantamount to treason when promoted by Obama.

Certainly the years since 9/11 have seen a growing hostility to Islam on the right, not only among evangelicals and Christian Zionists but in other wings of conservatism as well. From time to time, the issue of Muslim influence within the United States and on American foreign policy has been debated among conservatives. Books denouncing Islamist aggression -- and conflating "Islamofascism" with the faith itself -- have reached a broad audience on the right. But the expression of those views was usually muted or ignored by the most important institutions and media organizations on the right until January 2009.

Consider the case of Grover Norquist, the anti-tax crusader, lobbyist and organizer who has long been among the most influential figures on the American right. As long ago as 2003, Norquist (who is married to a Muslim woman) became the target of harsh criticism by conservative defense analyst Frank Gaffney over his connections with American Muslim leaders, including some accused of links with foreign terrorist groups. The most troubling accusation made by Gaffney and echoed in National Review and elsewhere was that Norquist had compromised the Bush White House and the Republican Party by introducing extremely unsavory Muslim leaders into their midst.

Norquist denied those charges and accused his critics in turn of racism and bigotry, expelling Gaffney from the fabled weekly meeting of powerful conservative and Republican leaders that still occurs every Wednesday in his Washington offices. (In fact, his reputation suffered much worse damage over his close association with crooked lobbyist Jack Abramoff than over his supposed truckling to Islamists.)

Back then, Gaffney admitted that Norquist was only a minor player in the Bush White House and its alleged sympathy toward what he identified then as “Wahhabist” or radical Islamist elements both in the United States and abroad. “I think the role that [Norquist] has played personally in this effort of behalf of Wahhabi-sympathetic and supported institutions is an important one, but it’s a bit role,” he said. Norquist was a side show, according to Gaffney, while the “main show” was the Bush administration’s continuing engagement with Muslim groups that he and others had identified as jihadist or radical.

Gaffney’s challenge to Norquist received attention on the right, but his critique of the Bush White House was essentially ignored. Norquist continued to play a powerful role on the right -- hosting a debate between candidates for Republican National Committee chair last year, for instance. And the Muslim-bashing faction that had attacked him was relegated to the sidelines, notably when Pamela Geller, impresario of yesterday’s anti-mosque demonstration, was barred from hosting an official panel at the Conservative Political Action Conference. Three years ago, very few conservatives would have worked with her or echoed her message.

All that has changed since the inauguraton of a president whose middle name is Hussein and whose father was Muslim, because he provides a central focus for a politicized campaign against Islam. Since January 2009, Norquist has again become a target of critics on the right. Bush himself has remained silent, perhaps preferring not to revive the dormant controversy over his own relationships with the Saudi kingdom and with Muslim groups here. Figures such as Bolton and Gingrich, who never spoke out about Islam during the Bush administration, have discovered that Muslims pose an existential threat to Western civilization.

Paranoia and prejudice have long been instruments of right-wing politics in America, from the Red Scare and McCarthyism to the Nixonite Southern strategy. The current outbreak of Islamophobia represents the latest product of the same old manufacturing process. It is irresponsible and dangerous as well as cynical precisely because we face deadly adversaries whose movements profit from every rift between the West and Muslims.