In Emma Donoghue's new novel, a 5-year-old and his mom must escape the only life he's ever known 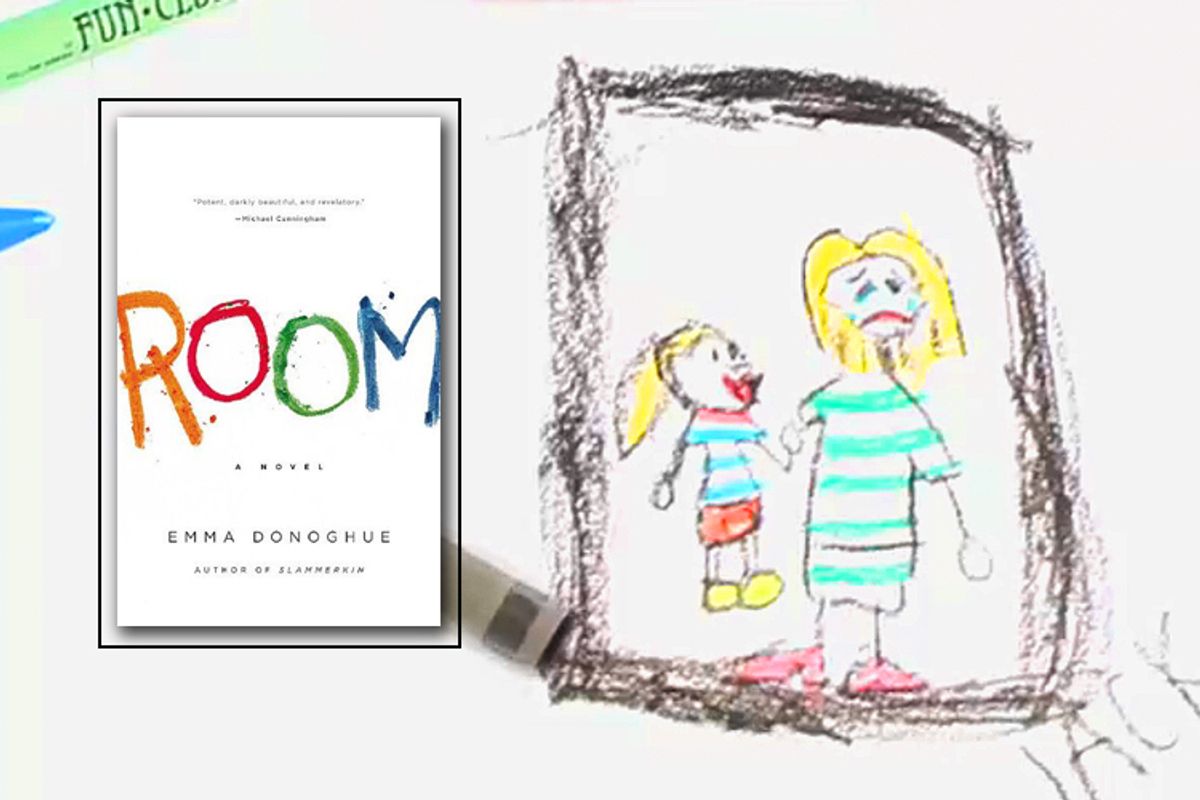 A still from the promotional trailer for "Room"
--

A novel based on a notorious true crime walks a perilous line. If the case is well-known, the novelist's imagination can come across as intrusively prurient, no matter how much she fictionalizes. And even if she escapes that particular pitfall, there's the temptation, once you've indulged your readers' morbid curiosity about the Worst Thing That Can Happen, to salve their raw nerves with prefab twaddle about redemption, transcendence and the triumph of love/the human spirit. "The Lovely Bones," for example, manages to skirt the lurid territory of the average serial-killer thriller, only to wreck itself in the end by waffling on the finality of death and loss.

Knowing this makes Emma Donoghue's "Room," recently shortlisted for Britain's Man Booker Prize, all the more impressive. The novel is narrated by Jack, who at the age of 5 has never left Room, the 11-by-11-foot home he shares with Ma, Plant, Rug, Duvet, Meltedy Spoon, and the dozen or so other semi-personified objects that make up his world. He's never seen grass or trees or any animal larger than a mouse except on TV, which — according to his mother — depicts things, people and events on other planets, none of them "real for real."

Jack and Ma are prisoners of a man Jack knows only as Old Nick, locked in a soundproofed shed in his backyard and subject to power outages and famine if Ma steps out of line. Loosely inspired by the true story of a Austrian girl raped and confined to a basement by her own father, "Room" parachutes into the mind of a child engendered by a horrific crime. Like "The Curious Incident of the Dog in the Night-Time," it intrigues us by offering an oblique view of adult behavior filtered through the partial understanding of that child. But Donoghue does much more with the gap between Jack's limited perspective on the world and our own fallen knowledge. "Room" meditates on the nature and mixed blessings of love, innocence and motherhood itself.

Fanatical spoilerphobes might want to stop right there, because it's impossible to discuss the full scope of "Room" without revealing what happens when Ma realizes that she and Jack must make a bid to escape, however risky. It's one of the novel's iciest moments, because while Ma does little more than mention the word "foreclosure" to Jack, the reader follows her line of thought: If Old Nick loses his house, there's no way he'll just let Ma and Jack go free. "Room" is indeed suspenseful, but the fact that it could well keep you up late, eager to find out what happens next, isn't the extraordinary thing about this novel. Ma and Jack make their miraculous escape halfway through the book, and from Jack's point of view, that's when their troubles begin.

Ma has protected Jack so fiercely (relegating him to Wardrobe whenever Old Nick makes one of his nocturnal visits) that he doesn't even understand how much he's been deprived. She's taught him to read and to do arithmetic at a precocious level, devising an ingenious array of games, exercises and lessons using the sparse resources of their circumscribed world. They've never been apart, not even for moment, which makes Room a kind of paradise for a very small child. Ma still comforts him with breastfeeding; they've had no need to leave the blissful togetherness of the mother-infant bubble.

Donoghue has devised a voice for Jack that reflects not only his severely skewed upbringing but also his wobbly orientation once he and Ma are delivered into the place he calls Outside. He can navigate confidently in the familiar confines of Room, but when he and Ma — newly liberated and ensconced in a inpatient clinic while they adjust — try to have breakfast in the cafeteria, it's one scary hurdle after another. For one thing, Jack has never learned to walk down stairs. For another, Ma is the only human being he's ever been exposed to. Entering through the crowded dining hall, his ordinarily sound syntax breaks apart:

Some are in robes the exact as ours and some in pajamas and some in different uniforms. Most are huge and don't have long of hair like us, they move fast and they're suddenly on all the sides, even behind. They walk up close and have so many teeth, they smell wrong. A he with a beard all over says, "Well, buddy, you're some kind of hero."

Ma has her own problems, including an intermittent tendency to become what Jack calls "Gone." In the novel's second half, as her son makes his halting entrance into world, the emotional balance of their relationship shifts. Without denying Jack's vulnerability, Donoghue allows an almost terrifying resilience to seep into his narrative — terrifying because the momentum that drives a child to adulthood, that sends him rocketing away from the past, is so relentless and inexorable. Jack, we see, stands a chance of forgetting about Room, even if he doesn't especially want to. Ma never will.

There's a wholeness to the conclusion of "Room" that doesn't resort to false tidiness and bogus uplift. Even as Jack says goodbye to the strange idyll of his childhood, the reader understands that some day he'll ask Ma who his father is, and they'll enter a new part of their story, one we'll never read. A sunny outcome is far from guaranteed. But then, is it ever?