Christine O'Donnell and the "man-pants" primary 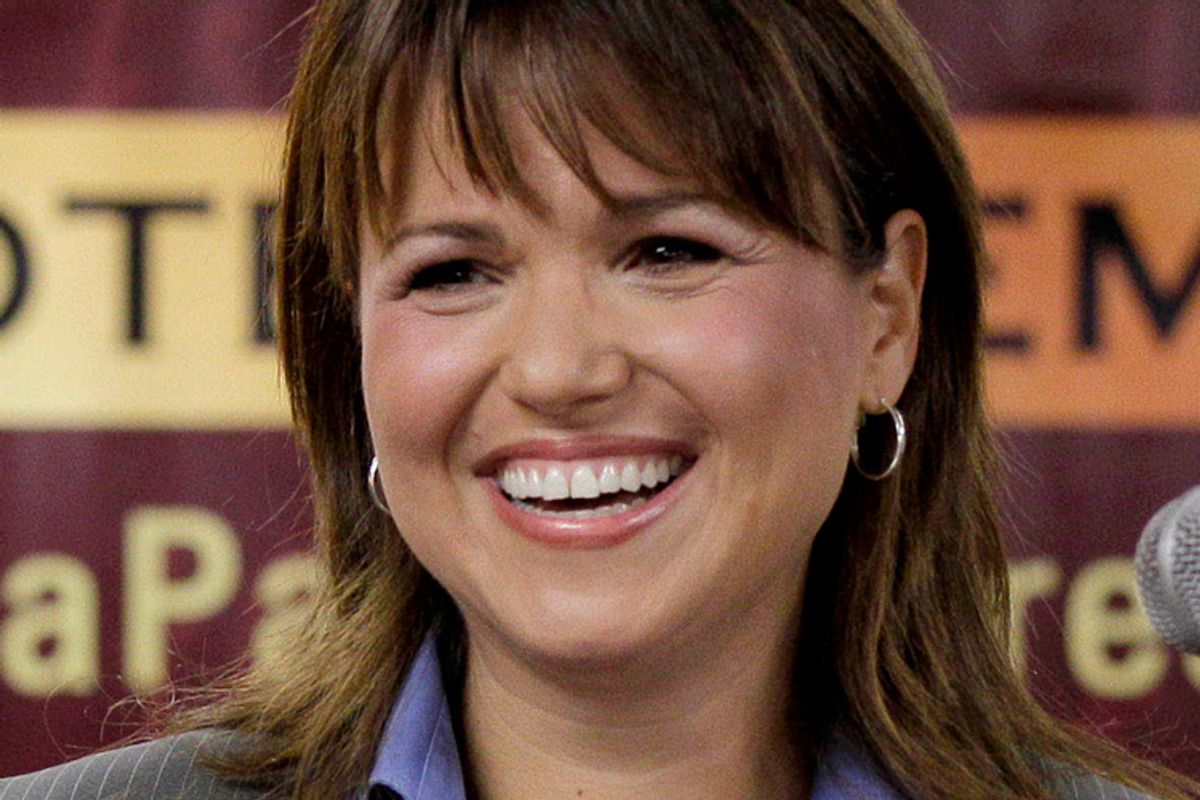 Tomorrow is primary day in Delaware -- a special election for the symbolic Biden seat -- and it’s looking like anything can happen. Tea Party candidate Christine O’Donnell is gaining on Mike Castle; according to a new PPP poll, she's actually pulled 3 points ahead of the congressman and former governor.

Last week, Sarah Palin endorsed her; Sean Hannity broke the news on Twitter, increasingly a platform for the new instantaneity in politics: Her commercial comes from the Tea Party playbook: lash your opponent to the White House, turn him into an Obama clone who supports bailouts, healthcare reform, the entire agenda.

Indeed, O’Donnell has been criticized for using essentially the same attack commercial that Sharron Angle is using against Harry Reid in Nevada:

But what makes this campaign different is its sizzling sub-narrative that Mike Castle is gay. Check out this innuendo-bloated video, where an off-camera voice asks, "Isn’t Mike Castle cheating on his wife with a man?" The on-camera faux newscaster replies, "That’s the rumor":

The video showed up on the website of Liberty.com, a consulting firm that was, until recently, employed by the O’Donnell campaign.

O’Donnell has condemned the attack. But her denial manages to repeat the rumor twice:

This so infuriated Rachel Maddow that she responded with a typically withering riposte:

By the way, repetition does stick -- it’s called the illusory truth effect. The more you repeat something, the more likely it is to be perceived as true, if there is a framework for acceptance. And guess what? There is no shortage of politicians, especially older Republicans, who’ve been outed.

Further drama. The Delaware Republican Party went to the Federal Election Commission to complain about alleged illegal coordination between the Tea Party Express and the O’Donnell campaign.

In response, O’Donnell laid the gay  innuendo on thick on the Mark Levin show:

"You know, these are the kind of cheap, underhanded, un-manly tactics that we’ve come to expect from Obama’s favorite Republican, Mike Castle," said O’Donnell. "You know, I released a statement today, saying Mike this is not a bake-off, get your man-pants on."

Wonder if that’s why Mike Castle is running a spot that shows him as a real guy, hanging out at a blue-collar diner, with strategic intercuts of rotgut coffee being poured (no Starbucks, please) and sandwiches -- not panini -- being sliced:

Castle’s also gone negative, attacking O’Donnell for a list of alleged financial shenanigans that make her seem like a serial guest on "Judge Judy":

Meanwhile, all the polls show that Castle would be a much stronger candidate in the general election. The Wall Street Journal editorial page called this election a "test of political pragmatism" and quoted William F. Buckley’s maxim that he always voted for the conservative who could win. We’ll see tomorrow if the Tea Party Express rides over the Reality Railroad.