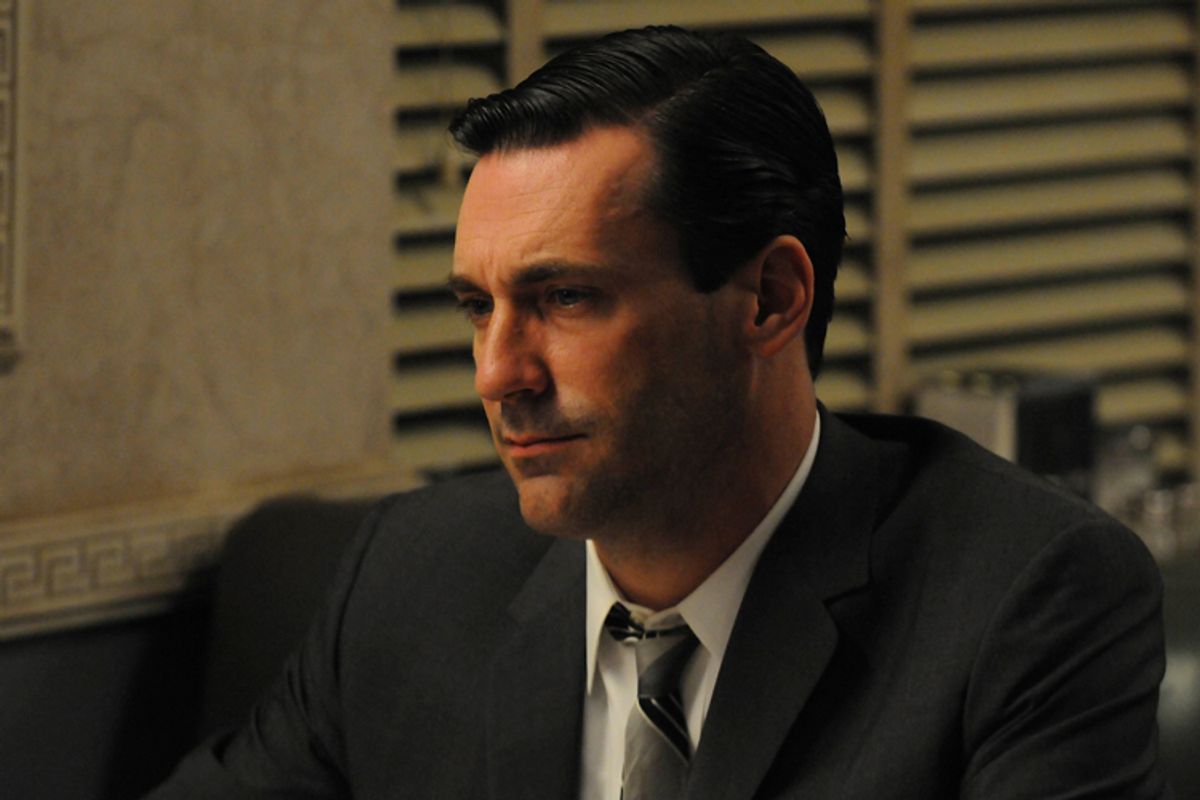 "When a man walks into a room he brings his whole life with him. He has a million reasons for being anywhere. Just ask him for one. If you listen, he'll tell you how he got there, how he forgot where he was going, and then he woke up." – Don Draper

Last week's unforgettable episode left us hoping for a big change in the atmosphere of "Mad Men," and "The Summer Man" delivered just that. After being lost for months, Don is finally waking up to the world around him. Beyond changing all of his habits -- swimming laps at the pool, reflecting on his life and his feelings, wondering if he doesn't have a drinking problem -- Don encounters everyday experiences with renewed interest. He ruminates on the pleasures of living alone ("I like sleeping alone, stretching out like a skydiver, cool patches to roll onto. I should appreciate it more") and notices smells a lot -- the smell of corn, then perfume, then the fact that Faye Miller smells nice. It's as if he's been dead for a while and now he's alive again.

Or maybe he's just facing himself for the first time. Last week, Don left his door open and credits rolled to Simon & Garfunkel's "Bleecker Street," and this week the references to "The Graduate" are everywhere, from the close-ups of Peggy and the boys drinking in Don's office as the sound drops out to the scene where Don drifts to the bottom of the pool. I half expected Mrs. Blankenship to growl at Don, "Would you like me to seduce you?" Instead, she says, "I tell you, I was blind but now I see!" after her cataract surgery.

Between lines like that one and Don's journaling and seeing the world through the eyes of an alienated kid, this episode could feel a little over the top, if not for the fact that, as viewers, we're as anxious to climb out of the darkness as Don is. As jolting as it is to be out in the bright sunlight, listening to the blaring strains of "(I Can't Get No) Satisfaction," this is how it feels to make your first fumbled attempts to start over after a major crisis.

The voice-over, in particular, is a bold choice. For a show with a lot of restraint, this is the most we've heard of Don's thoughts so far, and the closest we've come to understanding his perspective for years now. Most of all, we see that Don is determined not to end up like Roger Sterling. He refuses to get stuck in the dead-end habits of his generation. He doesn't want to become a dinosaur.

With the ground shifting underneath them, many of the characters are faced with similar choices. Joan's cool exterior and smooth manipulations haven't worked for her at SCDP; she doesn't smile smugly and wink anymore so much as stomp around telling those crazy kids to get off her lawn. And who can blame her? She's been offered some disturbing perspectives on herself lately, from Lane Pryce, who demeans the way she has all the other men wrapped around her finger, to Joey, who openly ridicules her old-fashioned sex kitten appeal. "What do you do around here besides walking around like you're trying to get raped?" he asks her. "I don't need some madam from a Shanghai whorehouse to show me the ropes."

Back at home, Joan's husband, who did rape her, is about to leave for the Army. Even after she bursts into tears, he tries to coax her into fooling around by saying, "Just pretend we're in some big town hotel, and we just snuck away for the afternoon" -- which can only leave Joan pretending that he's Roger Sterling. Suddenly, all of Joan's traditional choices -- marrying a doctor, keeping an administrative job -- are robbing her of any satisfaction in her daily life. She has no friends at work (thanks to her role shifting from conspiratorial mother hen to nagging school marm) and no one at home (thanks to her marrying a nice doctor she hardly knew).

By the time Peggy stands up for Joan by firing Joey (after he draws Joan giving Pryce a blow job), we have a feeling that Joan's not going to be eternally grateful. Even so, the sting of her words comes as a shock. "You want to be a big shot. Well, no matter how powerful we get around here, they can still just draw cartoons," Joan tells her. "So all you've done is proved to them that I'm a meaningless secretary, and you're another humorless bitch."

Joan may be right, but more than anything she proves that she is a dinosaur, intent on solving problems in indirect ways (having lunch with a client instead of handling the situation directly) with no sense of sisterhood whatsoever. Joan is a tragic demonstration of what happens to your life when you can only have intimate, trusting relationships with men. We know how undeserving her husband is of her trust, but when the only person who understands her at the office tries to help her, misguided or not, she snaps. Then, returning to her unruffled tone of voice, she tells Peggy to have a nice weekend -- expressing her intention to continue valuing a smooth professional demeanor over honesty or real friendship.

Bethany and Betty are also revealed as outdated sides of the same coin: Bethany believes that she's not getting more dates with Don because she hasn't put out yet, and assumes that she'll seal the deal with some oral favors in the cab. (Maybe this episode should've been called "The Blow Job.") "To be continued," she murmurs before exiting, but instead of holding Don's interest, in voice-over he says, "I bet she was thinking of that line all night." Parlor tricks aren't Don's thing anymore; instead he prefers the frank talk of Faye Miller (who catches his attention not by flirting, but by telling someone off over the telephone).

While Bethany indulges some old-fashioned ideas about seduction, Betty tries to break out of her domestic trap by acting out like a teenager, only to have Henry tell her that she's not an adult and his days of playing supportive Daddy to her temper tantrums are over. "You need a drink? What are you, a wino? You need a drink? That's not something you're allowed to say," he berates her in the car, concerned that her immaturity is going to mess up his opportunity to run a mayoral campaign.

Betty: It was upsetting, can't you let me have that?

Henry: Not when it ruins the whole evening.

I'm guessing that our sympathies are about to shift here. Just as Don has spent the first half of this season playing the drunk jerk, Betty has shown us her coldness and her immaturity up until now, but we're starting to see just how terrible a decision she made in trading one boss for another. Meanwhile, Henry is becoming increasingly harsh, and his political ambitions are likely to put pressure on Betty to play the good girl again.

For now, she's repentant. "I misbehaved," she says to Francine of her anger at Henry, casting herself in a child's role again.

"Just be careful, Don has nothing to lose and you have everything," Francine tells her. Betty runs with this, demonstrating her supremely old-fashioned approach to happiness: She's more comforted by the appearance of happiness than she is by the actual feeling. "We have everything," she tells Henry at the end of the episode, but as she watches Don smile at baby Gene, the smug conviction in her face starts to fade.

"We're flawed because we want so much more," Don tells us in a voice-over. "We're ruined because we get these things and wish for what we had." But then Don loads his old boxes from Betty's house directly into a Dumpster. He's not wishing for what he had anymore -- but Betty still is.