Once only the stuff of fiction, this now-real extravaganza is the Kingdom of heat, pain and blue cheese 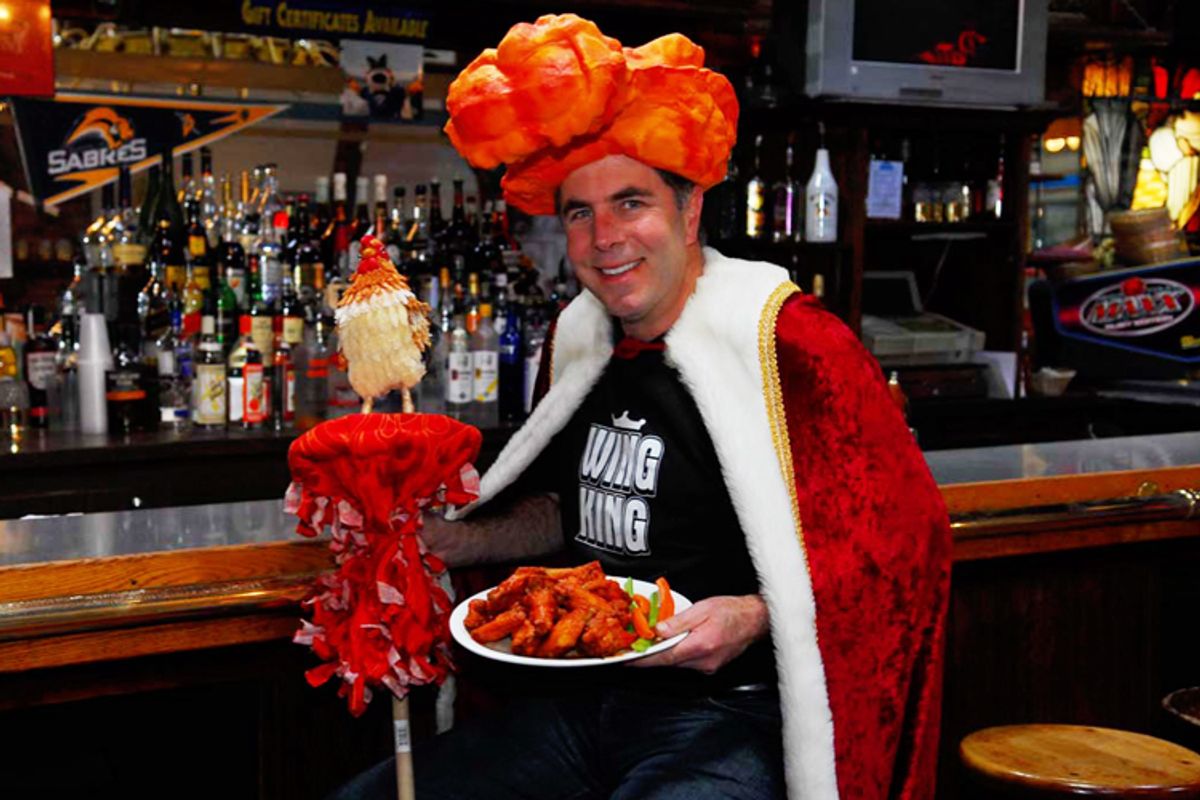 Teresa Guido was 300 miles from home with a mission and a carefully devised strategy. At a few minutes past 7 on a windy fall night in Buffalo, N.Y., she strapped on her goggles and stepped onstage with her competition. They sized each other up, the whistle blew, and then in a furious rush, they dunked heads into a kiddie pool filled with blue cheese dressing and frantically bobbed for chicken wings. The National Buffalo Wing Festival was in full effect.

Once a year, tens of thousands of devotees of Buffalo's namesake delicacy flock from around the country for this 48-hour bacchanal of eating contests, hot sauces and deep-fried chicken wings. This year, three tractor trailers delivered 45 tons of wings to the hungry crowd, to be promptly fried in 11.5 tons of oil. ("Trans fat-free," the festival proudly proclaims, but who's worried about heart health at an event like this?) But as much as the National Buffalo Wing Festival is a city's celebration of the humble food that put it on the culinary map, it's a living exhibit of the extremes to which people will go to demonstrate their love of their favorite food.

It's also probably the only national festival that has its roots in a poorly received animated comedy by the Farrelly Brothers. "Osmosis Jones" starred Bill Murray eating his way into an early grave, a man whose ultimate dream was to attend a fictional event called the "Buffalo Wing Festival." That fiction inspired some very real ideas in Buffalo native Drew Cerza. In hindsight, it seems obvious. Aside from snow, Buffalo is known for two things: eating chicken wings, and losing Super Bowls. It was only a matter of time until someone combined the two into what has since become known as "the Super Bowl of junk food." Cerza organized the first National Buffalo Wing Festival in 2002, and is now better known to Buffalo residents as simply "The Wing King."

By any measure, the numbers are staggering. In the festival's estimation, since 2002 over 500,000 attendees have consumed over 2.5 million wings (something like 137 tons). Weddings have taken place there. The de rigueur fashion accessory is a gigantic orange foam hat shaped like, of course, a giant chicken wing. As well as the "bobbing for wings" contest, attendees can also see competitive eaters downing wings by the plateful (this year: a new world record at 4.86 pounds in 12 minutes), something called the Miss Buffalo Wing Pageant, and, of course, restaurants from around the country offering chicken wings in kaleidoscopic flavors and styles.

It's the kind of variety that drew what was believed to be the festival's most diverse crowd ever this year, with wing fans from all 50 states and five continents turning out to take part, including Ms. Guido, who walked away victorious after using her teeth to fish 26 wings out of that blue cheese-filled kiddie pool. (Her strategy -- first go for the wings on the surface -- went out the window as soon as her goggles became too smeared, although she was proud to say that she managed to pull out a few "two-fers," which put her over the top. The spoils of victory: bragging rights and a free T-shirt.)

As unpalatable as that may sound, it was par for the course at an event where the relative deliciousness of any menu item could only be described in terms of escalating violence. The National Buffalo Wing Fest is the only place in the country where within a few short feet you can find spicy wing flavors ranging from the obscene (Assid), the nuclear-themed (Triple Atomic), the threatening (Bar-B-Cide, DOA), as well as a few genuine head-scratchers, including the "Ghostface Killa," which as far as rapper-inspired food names goes is admittedly more appetizing than, say, Ol' Dirty Bastard.

Of all the extreme behaviors that can be witnessed here, the one most perplexing to outsiders must be the one-upmanship of those gastronomic adventurers known as hot sauce aficionados, people who gleefully bite into a wing so spicy it's practically glowing, only to reel back and reflexively contort their face into a rictus of agony.

Talk to them, and they sound less like gourmands and more like medieval flagellants, men on a never-ending quest to test the limits of their pain threshold. "Just to see if I can stand it" is a common refrain. They show up to events such as these, often crossing multiple state lines, not simply to eat spicy wings, but to do battle with them. And for many of these warriors, their Waterloo came in the form of a tent for the Atlanta-based chain called Wing Zone, which offered a challenge to all comers: eat 25 of what were by all accounts the hottest wings at the festival and win $250 (which could presumably help pay for the tongue transplant you would need afterward).

According to the chef-cum-carnival barker in charge, these wings measured close to 500,000 on the Scoville Scale, a standardized measurement of a hot sauce's "hotness." To put that into perspective, consider that the hottest jalapeños only measure in at about 8,000 Scoville units. When asked if he had taken this challenge himself, the chef gave me a look as if I'd asked him if he'd ever eaten broken glass, and maintained that he refused to even sample this sauce for taste.

It was at this booth that I saw a grown man take one bite of his first wing, immediately throw the rest to the ground, and frantically grab a beer out of the hand of a nearby stranger, tears streaming down his purple face. He had traveled from Cincinnati to Buffalo in order to taste "the hottest of the hot," and when asked if he was disappointed with his performance, he rasped a breathless, "Hell, no ... I'm just thankful I survived." He echoed most of the other defeated challengers, who spoke with the kind of shell-shocked disbelief sometimes heard from Vietnam vets describing jungle firefights. "Just ... fire," he said. "Fire and pain."

Watching this, it's not unreasonable to wonder: Why not skip the wings and just take a bite out of a cactus or something? But after two days, the feelings I most witnessed was wonder and ecstasy, a truly devoted commitment by thousands of people to their favorite food. I might not find having the notion of having to strap on goggles to eat something particularly exciting, but who among us hasn't enjoyed some favorite food and thought, even for a moment, "My God ... I wish I could just dunk my head into a kiddie pool of this stuff?" These people have just found their culinary calling.

Covered in slimy blue cheese and an ear-to-ear smile after her wing-bobbing victory, Teresa Guido put it even more simply than that when asked what drives her to such extremes: "I love wings, and these are the best." Who can argue with that?