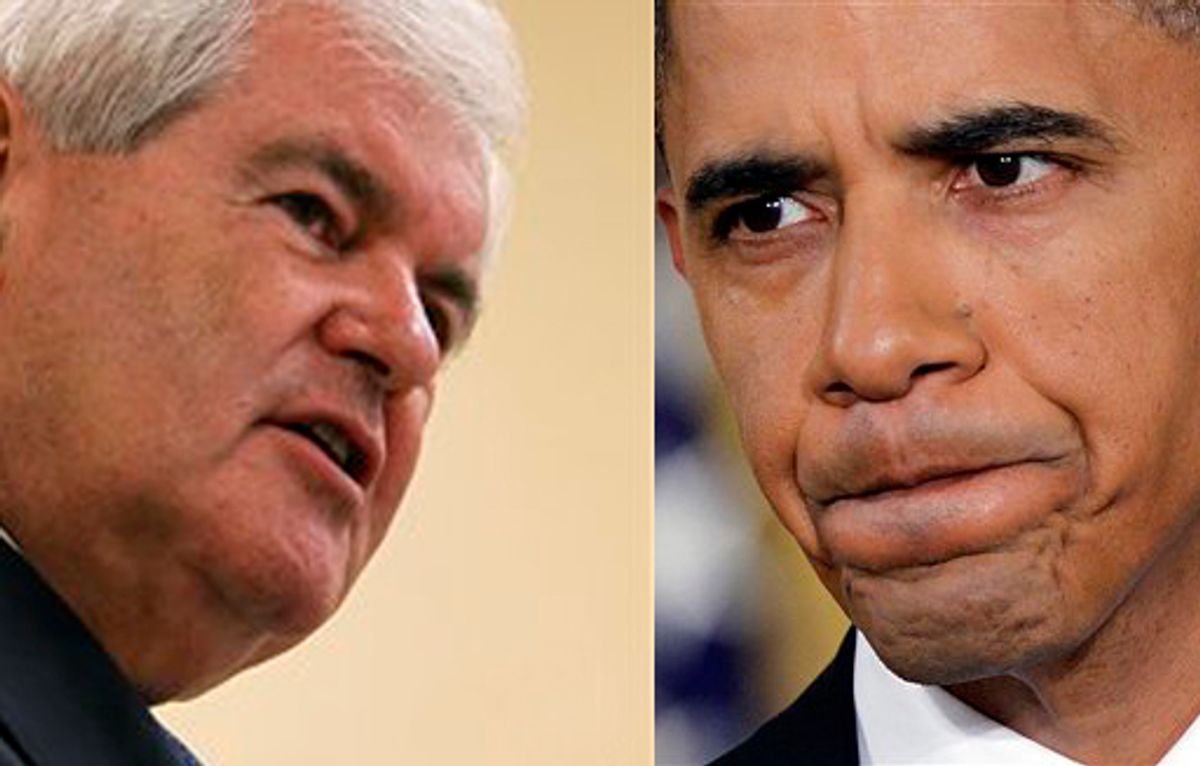 Newt Gingrich, the intellectual leader of the Republican Party, has finally figured out what is wrong with President Barack Obama: He is a Kenyan anti-colonialist.

Gingrich had a chat with Robert Costa from National Review and Slate's Dave Weigel after a screening of his new film, "America at Risk: The Owls of Ga'Hoole." And he had a lot to say about the president!

“What if [Obama] is so outside our comprehension, that only if you understand Kenyan, anti-colonial behavior, can you begin to piece together [his actions]?” Gingrich asks. “That is the most accurate, predictive model for his behavior.”

“This is a person who is fundamentally out of touch with how the world works, who happened to have played a wonderful con, as a result of which he is now president,” Gingrich tells us.

“I think he worked very hard at being a person who is normal, reasonable, moderate, bipartisan, transparent, accommodating — none of which was true,” Gingrich continues. “In the Alinksy tradition, he was being the person he needed to be in order to achieve the position he needed to achieve . . . He was authentically dishonest.”

“I think Obama gets up every morning with a worldview that is fundamentally wrong about reality,” Gingrich says. “If you look at the continuous denial of reality, there has got to be a point where someone stands up and says that this is just factually insane.”

So: a "wonderful con," Alinsky, Kenyan, American people "will take it back," etc. etc.

Newt got this line of barely coded racist bullshit from the latest Forbes. The Sept. 27 issue features a thinker by Dinesh D'Souza, who finally got around to reading "Dreams From My Father." This is what he took away from the president's memoir:

Incredibly, the U.S. is being ruled according to the dreams of a Luo tribesman of the 1950s. This philandering, inebriated African socialist, who raged against the world for denying him the realization of his anticolonial ambitions, is now setting the nation's agenda through the reincarnation of his dreams in his son.

See? Isn't everything so much clearer now? Now do you understand why the president insists on taxing carbon emissions? Don't you see that his proposal to have the top marginal tax rate revert back to its '90s levels is just part of his attempt to "wring the neocolonialism out of America and the West"? (Still unclear: Why so many other elected Democrats insist on these things. Was Hillary Clinton secretly also raised in Indonesia?)

Also: Obama apparently views "America's military as an instrument of neocolonial occupation," which will certainly be news to the people in the countries we are still occupying and occasionally striking with unmanned drones.

The fun part is that this is just the trailer for D'Souza's upcoming book, "The Roots of Obama's Rage."

This isn't Glenn Beck shilling gold and pitching Hayeck along with some long-dead Mormon Bircher's fantastical alternate histories. This is the cream of the crop of the conservative movement. And it's the exact same pseudo-academic divorced-from-reality conspiratorial garbage.

Maybe D'Souza's just a deluded fanatic who truly believes that the key to understanding a Democratic president acting in accordance with the party platform lies in a long-forgotten academic paper written by his absentee father. (I think that is honestly the case with this guy.) But Newt knows exactly what he's doing, exactly what message he's sending, and exactly what sort of argument and language he wants to normalize and introduce into the media conversation.

Newt's been a camera-seeking pile of talking shit so long that nothing he says or does should surprise anyone who's been paying attention, but it's still exciting to see him embracing a classy sort of birtherism where it doesn't matter that the president was born in America, because his heart belongs to his radical socialist foreign black African Kenyan whitey-hating father.